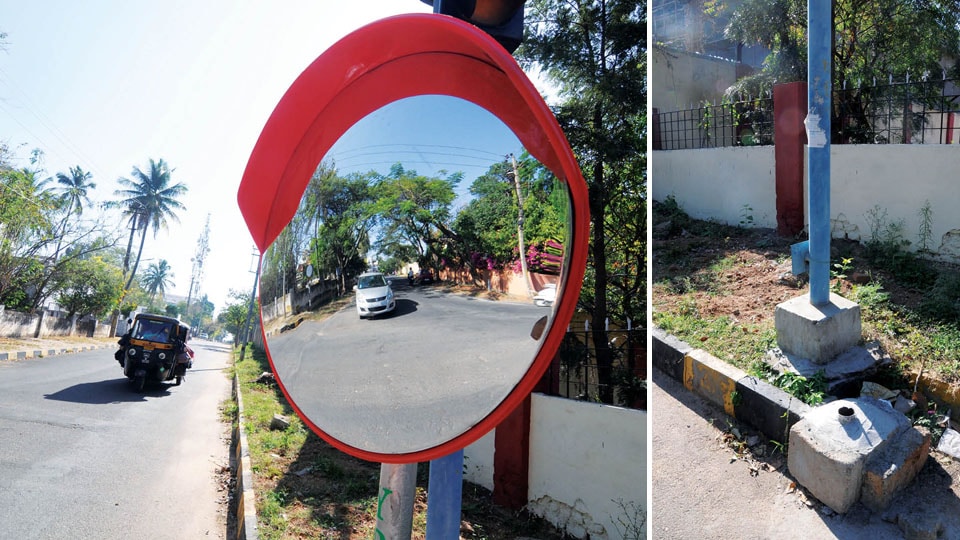 Mysuru: The Police and some private companies have installed Traffic Convex Oval Mirrors at various ‘T Junctions’ in city where blind turns were increasing the possibility of accidents.

Usually, these mirrors are mounted to a wall or ceiling at points where hallways cross each other or make a sharp turn. This eliminates blind spots and provides people with a good overview of their surroundings.

The convex mirror is also used to provide safety for motorists on roads, driveways and in alleys where there is a blind spot or where the driver has limited visibility.

Traffic Convex Oval Mirrors have been installed at various ‘T Junctions’ where three roads meet. Some of the places they have been installed are near City Police Commissioner’s Office – Nazarbad, KSRTC Depot – Bannimantap, near  Sri Ramakrishna Vidyashala at Yadavagiri, near Vasanth Mahal (Government Teachers Training Institute) – Nazarbad, BSNL Training Institute at T.K. Layout, two entry points of Infosys campus at Hebbal, near Rani Bahadur auditorium in Manasagangothri and near Mahajana Park in Jayalakshmipuram.

As many ‘T Junctions’ were sharp and dangerous where accidents take place frequently, a decision was taken to install the convex mirrors at these critical spots. “Based on the inspection taken out by the Police and their field report, convex mirrors have been installed at many places,” said a senior traffic Police officer.

According to him, mirrors would help truck drivers easily spot the vehicles coming from the opposite direction and avoid collisions. A detailed survey will be conducted by the Police to identify a few more junctions to install such mirrors, he added.

While the initiative of the City Police to install such mirrors is over 10 years old, many private companies have come forward to install such convex mirrors at road intersections. While this is a novel step to prevent accidents, some of the mirrors have been stolen overnight by miscreants.

At some places they have been broken. The mirror that has been installed on Bogadi Road where four roads meet near Mata Amritanandamayi Circle at Vijayanagar Third Stage has been taken away by miscreants after cutting the metal hinges.

These mirrors form an integral part of traffic streamlining in city. While mirrors that have been installed inside the campuses of IT companies are put to maximum use, mirrors that have been installed at public ‘T Junctions’ desperately need protection from vandalism and theft. The role of Resident Welfare Associations and the jurisdictional Traffic Police Stations is important here.