Home » News » Bandipur tiger dies while being shifted to Bengaluru 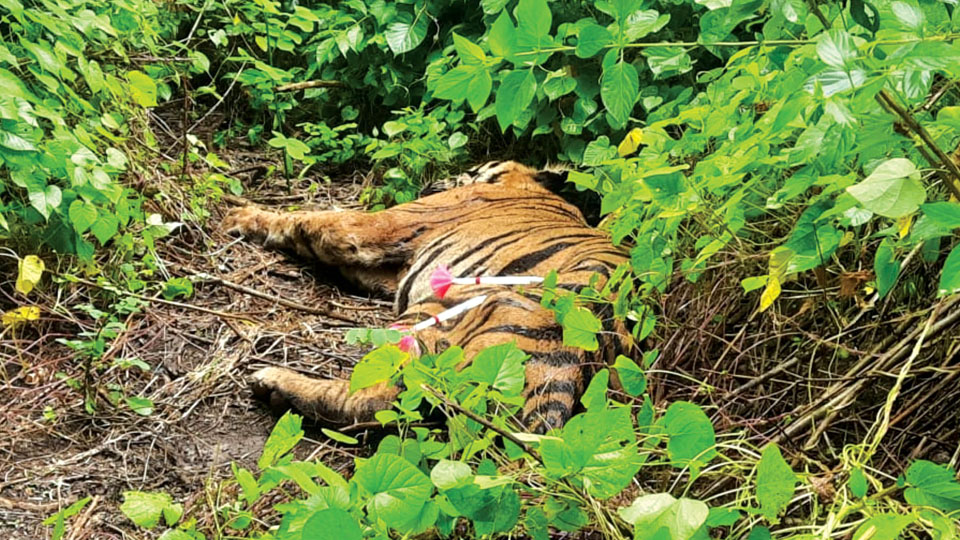 Bandipur tiger dies while being shifted to Bengaluru

H.D. Kote: A tiger aged five, which was found injured in the Hediyala sub-range of Bandipur Tiger Reserve, succumbed to its injuries yesterday while being shifted to Bannerghatta for treatment. Territorial fighting is said to be the reason.

Forest Department officials said that the male tiger was first observed by the Forest Guards and staff of Special Tiger Protection Task Force on Thursday with injuries on its limbs and forehead. Efforts were made to trap and treat it in a wild territory.

When efforts to trap the tiger failed, the authorities resorted to tranquillise the injured tiger and administered first aid. It was decided that the tiger would be shifted to Bannerghatta Biological Park in Bengaluru for treatment. But the big cat died on its way near Mysuru.

The tiger was spotted at Gundre Range Nayalla Beat near Suthanahalli backwater. As it was badly injured and needed medical attention, the National Tiger Conservation Authority (NTCA) was contacted to seek permission as the feline had to be captured and treated in a wildlife protected zone.

It was injured in its legs, face, elbows, stomach and also eyes. As the efforts to trap the big cat failed, the animal was tranquillised. The fight would have taken place 10 days back and the tiger was fighting for survival, said officials.

Unable to bear the pain, the tiger was inside water for a couple of days and hunger forced it to get back to the woods. Due to the injuries, it was unable to hunt and was spotted in a pitiable condition. Following the NTCA directive, a cage was kept with a goat tied on the other side. But the big cat did not fall into it, forcing tranquillisation by veterinarian Dr. Vaseem Mirza who fired the dart.

After the first aid at the Bandipur Reserve, the officials decided to take it to Bannerghatta Biological Park. The animal was wrapped in a net and loaded onto a transport vehicle to be shifted. But the feline breathed its last near Mysuru,                                officials said.