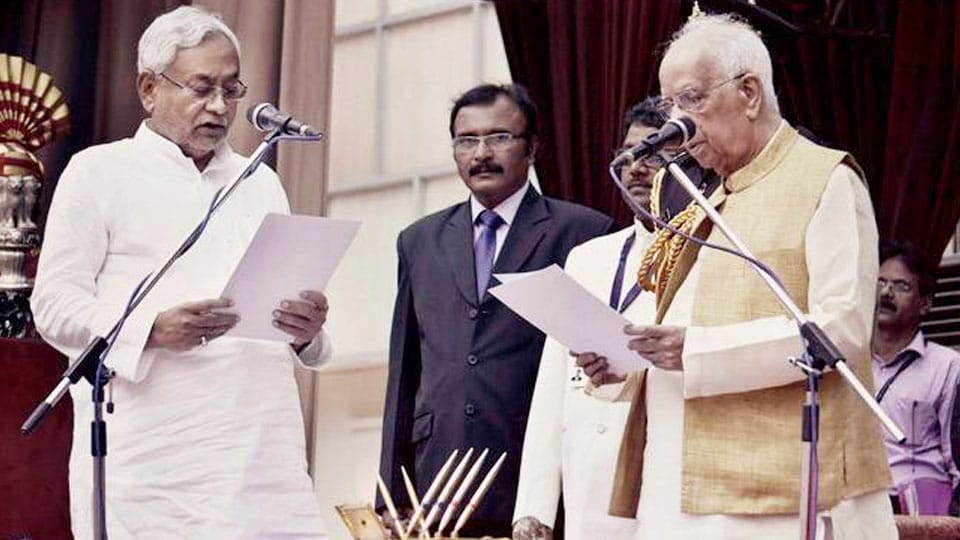 Barely 14 hours after resigning: Nitish Kumar back as Bihar CM

Patna: Fourteen hours after he resigned as the Chief Minister of Bihar stating he could no longer continue amid allegations of corruption in his government, Janata Dal (United) leader Nitish Kumar came back as Chief Minister when he took oath of office this morning. Nitish resigned over a CBI FIR against his Deputy and ally Lalu Prasad Yadav’s son Tejashwi Yadav.

Nitish is back with the BJP, whose Sushil Modi was also sworn-in; he gets his old post of Deputy Chief Minister back. Other new Ministers will take oath after Nitish wins the trust vote likely to be held tomorrow. “Our decision is in Bihar’s interest, for its development,” Nitish said.

Late last night, Nitish Kumar met Bihar Governor Keshri Nath Tripathi a second time — he had met him to resign earlier in the evening — and staked claim to form government with the support of BJP and smaller parties. “We have submitted a letter with support of 132 legislators,” Sushil Modi told reporters after they met the Governor.

Tejashwi Yadav contended that as Bihar’s largest party, his Rashtriya Janata Dal (RJD) should be given first chance at Government formation. He drew a blank at the Raj Bhawan and sat on protest outside the Governor’s residence, threatening to go to Court.

“There was no scandal before this, I tried to make it work for as long as I could,” Nitish Kumar said after handing his resignation to the Governor. “My conscience would not allow me to continue,” he said. Responding to the move this morning, Congress Vice-President Rahul Gandhi said, “The problem with Indian politics is that people will do anything for selfish gains.”

Reacting to the developments, RJD Chief Lalu Yadav said that BJP was fooling the nation. He accused Nitish Kumar of planning the break-up in “cahoots with the BJP” and has accused him of cheating voters. Their Grand Alliance or the ‘Mahaghatbandhan,’ he said, got a massive mandate on an anti-BJP plank and has challenged Nitish Kumar to face voters again in an election. He has also said the RJD will protest in Parliament.

“They (BJP) wanted to pin the blame on Tejashwi. They were afraid that Tejashwi would come up as a worthy opponent in 2019. This is a conspiracy by Amit Shah and Narendra Modi. This is nothing but political vendetta,” Lalu alleged.