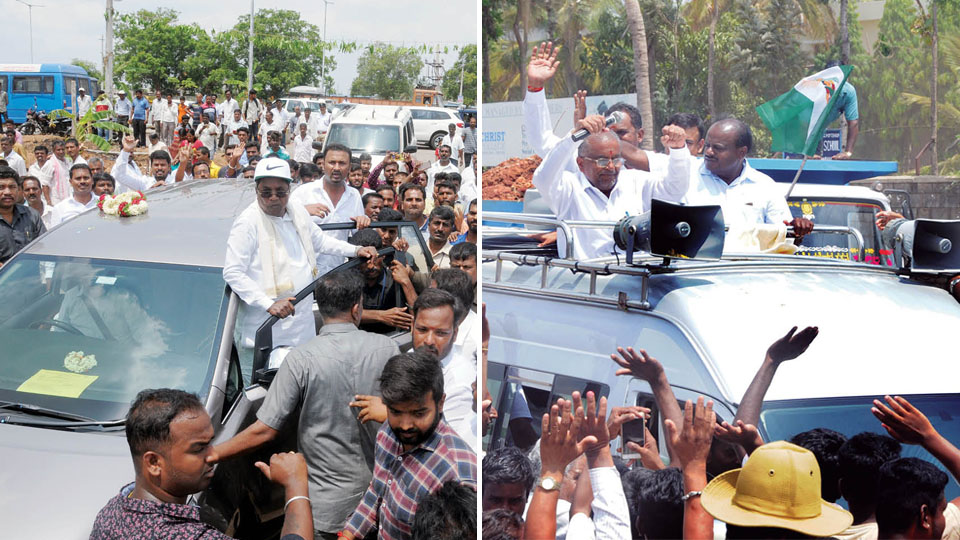 Mysuru:  Even as his political foe H.D. Kumaraswamy (HDK), State JD(S) President and former Chief Minister, is winding up his second leg of poll campaign in Chamundeshwari Constituency tonight, Chief Minister Siddharamaiah hit the campaign trail for the second time this morning in the Constituency from where he is contesting.

With the CM contesting from the Congress in Chamundeshwari, the high voltage campaign in the Assembly segment, which is witnessing a keen battle between Siddharamaiah and sitting JD(S) MLA G.T. Devegowda, has gained traction.

On his arrival at Mysore Airport in Mandakalli by a special flight from Bengaluru this morning, the CM first visited Lingambudhipalya where he was accorded a warm welcome by the villagers, who burst fire-crackers and showered flowers on him.

The CM’s next destination is Srirampura from where he will visit 16 more villages falling under the Constituency, which include Parasayyanahundi,  Gorur, Koppaluru, Hosahundi, Uttanahalli and Alanahalli.

The CM is scheduled to continue his campaign trail tomorrow also in order to cover as many villages as possible. Siddharamaiah will campaign in Varuna Constituency, from where his son Dr. Yathindra is contesting on a Congress ticket, on Wednesday and Thursday. The CM will file his nomination papers from Chamundeshwari seat on Apr.20 (Friday).

Earlier, speaking to press persons at Mandakalli Airport, Siddharamaiah, who was accompanied by District Minister Dr. H.C. Mahadevappa, lashed out at State JD(S) President Kumaraswamy’s remark that the CM’s numerous campaigns in the Constituency won’t work as he (CM) will be defeated.

Wondering whether Kumaraswamy had votes in his pocket to make such a remark, the CM reminded the former CM that it is the people who would make the ultimate choice in a democratic set up.

READ ALSO  How to find the polling station where you have to vote?