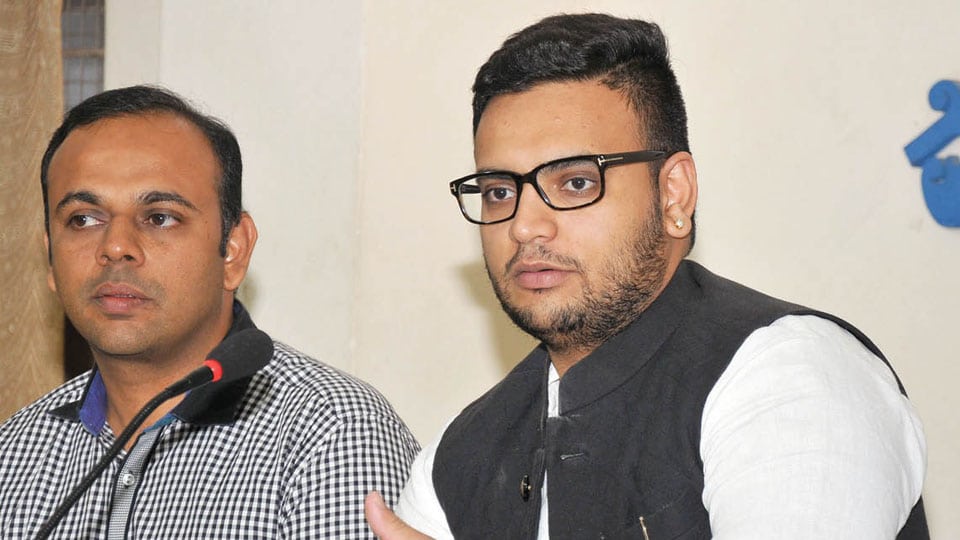 ‘Battle of Haifa’ centenary fete in city on Sept.23

Mysuru: Member of the erstwhile Mysore royal family Yaduveer Krishnadatta Chamaraja Wadiyar said that the centenary commemoration of the ‘Battle of Haifa’ will be held at Rajendra Kalamandira on Ramanuja Road in city on Sept.23 at 6 pm.

Addressing a press conference at Pathrakartara Bhavan along with Secretary of Haifa Centenary Celebration Committee M.S. Harish Shenoy, Yaduveer said that the battle between the joint Ottoman and German forces and the regiment comprising Jodhpur Lancers, Hyderabad Lancers and Mysore Lancers for 15th Imperial Service Cavalry Brigade was among the historic combats in the records of Mysore kingdom. The ‘fiercest battle’ in the city of Haifa in Israel culminated on Sept.23, 1918.

One of the reasons for celebrating the centenary was to make aware the people of Mysuru about this forgotten history. “We have constituted the Haifa Centenary Celebration Committee to pay homage to the soldiers from Mysore and we have organised the centenary celebrations on Sept.23 where the descendants of Mysore Lancers will be felicitated,” he said. Higher Education Minister G.T. Devegowda, who is also the Mysuru District Minister, MPs R. Dhruvanarayan and Pratap Simha will participate, he said.

Elaborating, Yaduveer said that Lancers were soldiers of a cavalry regiment, armed with lances — a long weapon similar to a spear, with a wooden shaft and a pointed steel head. These were used by horsemen. Lancers were the personal bodyguards of the then Maharaja Nalwadi Krishnaraja Wadiyar and most of them belonged to Urs families.

“War historians say that Indian soldiers, including Mysore Lancers, were armed only with lances and swords while the Turks were armed with artillery and guns. Soldiers from Mysore along with Jodhpur and Hyderabad Lancers fought and liberated the Israeli city of Haifa,” he said.

Records say that over 3,000 Lancers from Mysore took part in the battle. While some Lancers were martyred, many came back victorious in 1920 and later, the unit was merged with the Indian Army under 61st Cavalry. There are about 800 graves of Indian soldiers across Israel, including in Haifa, Yaduveer said.

The joint forces of Mysore and Jodhpur Lancers also freed the leader of Baha’i Faith, Abdu’l Baha, son of the founder of the Faith, from unjust imprisonment. Yaduveer said a Memorial commemorating the bravery of Indian soldiers exists in Haifa, New Delhi and Bengaluru. The government can consider developing such a Memorial in Mysuru too as the Lancers were originally from Mysuru, he said.

Harish Shenoy said, the Centenary Committee has proposed to take the Haifa story to schools and tell students about the bravery of Lancers who fought with lances and swords against their rivals who were armed with modern weapons. There are also plans to organise events like quiz and debates on the battle in schools. He too urged the State Govt. to install a War Memorial and Museum in remembrance of the Haifa battle, in Mysuru.