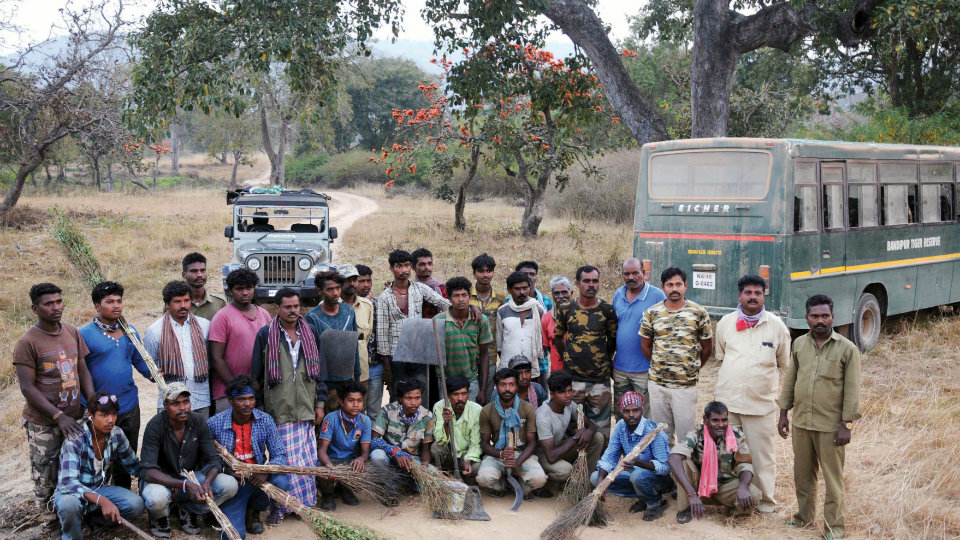 With the onset of summer in the entire landscape covering Bandipur-NagaraholeTiger Reserves, the Forest Department is bracing up to ward off the threat of forest fires. Like every year, forest fire is a burning issue to the Department and it has to be ready to protect the wildlife zone that supports a rich density of flora and fauna. The region and its vast swathes have a long history of major conflagrations, a problem compounded by dry season, empty water holes and blistering heat. This article features the untiring efforts by the Forest Department in shoring up fire-fighting capabilities.

Last year, Karnataka, an integral part of the fragile Western Ghats with its many Tiger Reserves and Reserve Forests, recorded hundreds of fire alerts every day, according to the Forest Survey of India. But not all these alerts convert into forest fires as they are first investigated and then cases are registered.

In 2017, Karnataka reported 1,333 forest fires, which means at least three a day made it to the books. With the climate registering drastic changes, environmentalists say the threat of forest fire looms large as soil has been largely unable to retain moisture.

Who can forget the inferno that destroyed vast swathes of forest land in Bandipur Tiger Reserve in February 2017 where a 28-year-old Forest Guard Murigeppa Tammangol alias Murugesh was charred to death while he, along with other forest staff and officials, was trying to douse the forest fire at Kalkare Range?

For over 15 days, more than 600 personnel of the Forest Department fought the blaze with all that they had, battling temperatures in excess of 5,500 Degrees Celsius. Trees as tall as 70 feet were licked by flames reducing hard timber to ashes in seconds. And despite odds stacked up against them, the Department heroes dug in their heels, battling the biggest blaze in decades in the Bandipur Tiger Reserve.

If the fire is started due to natural or man-made causes, the spread is more rapid due to an increase in the fuel load. Of late, there has been the issue of dry climatic conditions. Forests and the soil that hold them from have a very low-moisture content, making it easier to catch fire and to spread it. The water bodies which act as natural barriers for fire are normally dry from the month of February to June. Climatic conditions are just right for the fire to spread, say environmentalists.

Learning from bitter experiences, this time, the Forest Department is trying its best to prevent such unfortunate incidents and it is battle-ready to face another summer and its daunting challenges.

A tried and tested method to contain the forest fire is to create a fire-break or fire lines by clearing the vegetation as without vegetation, fire cannot spread. Fire breaks or fire lines are created along demarcated boundaries and are undertaken in winter as the presence of moisture enables controlled burning.

The focus of fire lines was to remove lantana — a weed which is highly combustible when dry — growth by the sides of the main road and forest tracks. Dry lantana acts as a fuel to fan forest fires. Large swathes of Bandipur have been swamped by lantana in recent years and this aggravates the problem during summer.

Sensitive places inside the forests have been identified and lantana growth has been destroyed along with roots in an area of 110 hectares on both sides of the road extending up to 30 metres.

Six watchtowers have been constructed inside the forest and the Department staff will work 24×7 in shifts at these towers maintaining a strict vigil. They have been equipped with communication equipment so that in case of fire, they can immediately alert the headquarters to send force and equipment to contain the fire before it spreads.

In addition, fire beaters from Kerala that is used effectively in the neighbouring State to combat forest inferno. Each fire beater is 6-feet long and has a flat rubber material at the other end made of vehicle tyres. Over 275 fire beaters have been procured from Kerala Agro Industry at a cost of over Rs.500 each.

Bandipur has 13 ranges and Hediyala sub-division alone has six ranges. Of the six ranges, Hediyala, Nugu, Moleyur, parts of N.Begur, Kalkare and parts of Gundre, are always prone to forest fires. “26 water sprayers, three 1.5 HP motors to pump water and 16 back-pack sprayers have been kept ready for use. These mini-motorised water sprayers of 20-litre capacity have also been provided to all ranges so that the staff can carry the same as backpacks and get into the interiors to put out small fires before they become major infernos,” Ambadi Madhav added.

Water sprayed from these cans can reach up to 15 feet and can be adjusted to spray water in a straight line or for a wide spray. With less water, this can is capable to extinguish spreading fires. Water containers of 2,000-litre capacity have been stationed at Gundre, Moleyur, Maddur and Bandipur ranges which are more prone to fire and can be transported anywhere in case of an emergency. The mini-van has a 50-metre long pipe attached to it and will facilitate the guards to extend their reach.

Eight tank-mound tractors will be purchased to add to the existing fire extinguishing equipment. This apart, the Department of Fire Services will be requested to station fire engines at strategic places along with operators to handle fire.

As a preventive measure, the local community and tribals too has been taken into confidence to help alert the forest staff and also douse fires. Awareness programmes have been organised to underline the inimical effects of such fires.

“We have formed ‘Aranya Sene’ including the local tribals in them to combat forest fires and each team has 10 to 18 tribal volunteers (educated tribal youths) who will spread the message of conservation and fire prevention. Street plays have been staged more than 30 times to bring in awareness about forest fires, measures to contain them and conservation efforts. Programmes are also being aired through Akashavani on conservation and battling inferno,” Madhav said.

Special zones have been formed based on past fire incidences and strategic plans have been prepared to prevent forest fires. Special stations to receive wireless messages have been set up at sensitive places and all the field employees have been given walkie-talkies for a better communication network and for the signals to effectively percolate during crisis situations. These field employees will transmit and receive messages throughout the day and night.

Nagarahole Tiger Reserve too is bracing up

The neighbouring Nagarahole National Park too is gearing up to fight forest fires. Fire lines that extend to an area up to 1,989 square kilometres have been prepared and over 300 fire watchers have been appointed in addition to 108 guards and 138 permanent staff of the Forest Department.

Three fire engines along with staff will be deployed at Veeranahosahalli, Antharasanthe and Nagarahole ranges as they can reach the fire-prone areas.

Special watch towers have been set up atop trees and specially made iron towers have been constructed for vigil. Communication equipment been handed over to field staff and in case of fire, men and equipment will reach the place within 30 minutes.

Thirty-nine Department vehicles will be used for fire-battling operations and eight more vehicles will be hired on contract basis to fight forest fires. Forest officers and staff are in close contact with tribals and residents of border areas so that fire incidents are eliminated.

Forest officers said that in the past, there have been instances of tribals setting fire to dry vegetation to settle scores with the Department over minor issues. Officers and staff are doing their best to gain the confidence of tribals so that the ‘intentional fire threat’ is eliminated. Tribals have been appointed as volunteers and watchers and they are paid for their duties, said Department officials.

Surveillance and patrolling around the forest boundaries have been intensified and patrolling teams are in constant touch with the staff deployed at watch towers. There will be frequent exchange of information between them and they are in touch with the headquarters every hour for incident reporting.

The strategy involves providing for greater involvement of local communities and use of modern tools of communication technologies. The aim is to put together a mechanism for an early warning system and cover a much larger area than at present.