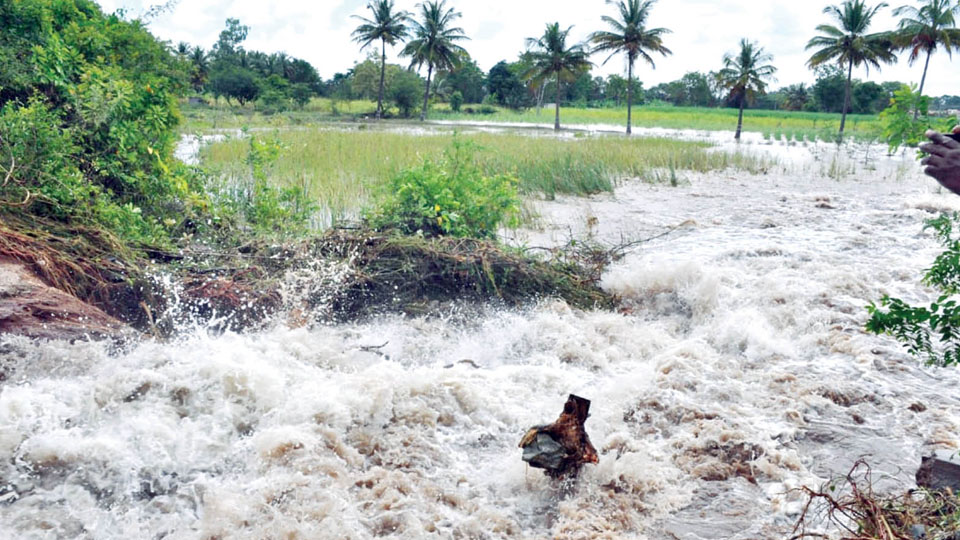 The lake was filled to the brim under the State Government’s scheme of filling lakes using river water to help farmers irrigate their fields and also to recharge groundwater. But despite cracks visible on the lake bund, no measures were initiated to prevent a breach, alleged villagers.

Though the lake breached yesterday morning, no officer from the department concerned visited the place till this afternoon. Villagers said that last evening MLA Niranjankumar had come to the spot and though he had directed officers to visit the place immediately, no one had bothered to visit the area. The lake is empty now and all the water is still in the fields with no outlets.

Crops have been destroyed in over 70 acres of land destroying sunflower, jowar, ragi and sugarcane plantations. “We had stored fertilisers in our fields to sprinkle them when it rained. Also, we have invested thousands of rupees on fishlings in the lake,” said villagers.

Water has entered into a school downstream the lake and has joined the Kamaralli Lake and the Begur CESC office that supplies 220/6 KV electricity too is in danger. One Mahesh who was proceeding on the road nearby on his bike was nearly washed away due to sudden flash floods that resulted after the breach. Luckily he was saved by alert passers-by. However, Mahesh’s bike could not be saved and it fell under the bridge.

Likewise, the house of Shivananjashetty was submerged downstream and he was pulled to safety by fire brigade personnel. Seeing their standing crops and fertilisers washed away, villagers staged a flash protest demanding compensation. MLA Niranjankumar reached the protest site and called up the officers to restore the breach and also see to it that other sides of the lake are secured.

READ ALSO  No takers for melons and tomatoes

The lake breach also led to political squabble with Chamarajanagar Milk Union (ChaMUL) President H.S. Nanjunda Prasad and others alleging that the water to the lake was filled by former Minister late H.S. Mahadeva Prasad and his wife Dr. Geetha Mahadeva Prasad. They alleged that MLA Niranjankumar neglected cracks in the lake bund that led to the breach.