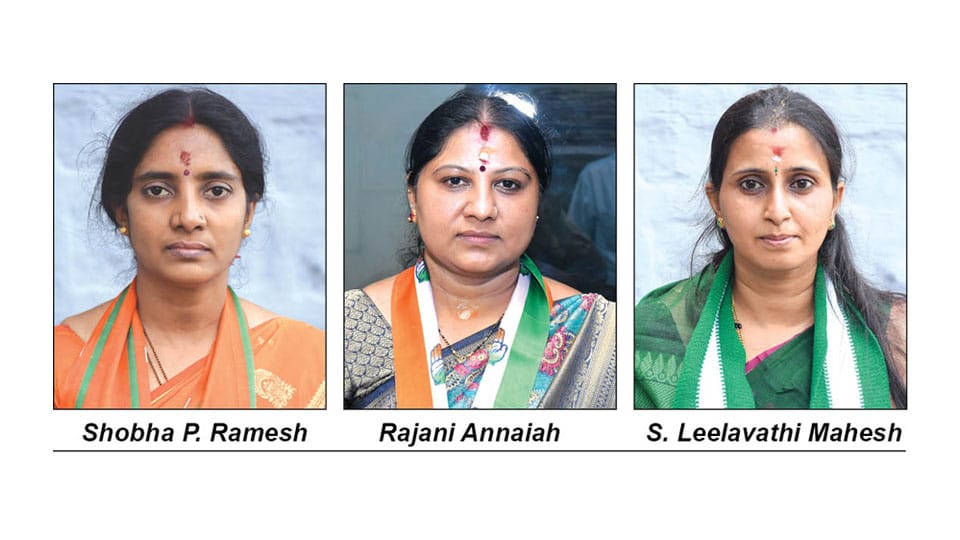 Mysore/Mysuru: Just a day before the deadline of nomination papers for the MCC by-poll for Ward 36, the BJP on Sunday announced that it was fielding Shobha P. Ramesh as its candidate.

Shobha Ramesh’s name was announced at a BJP meeting held at the party office in Chamarajapuram here yesterday evening, which was attended by MLA L. Nagendra, former Mayor Sandesh Swamy, City BJP President T.S. Srivatsa and a host of other BJP leaders.

Shobha is the wife of Ward 36 (Yaraganahalli and Ambedkar Colony) BJP President Ramesh, who is said to be an auto-driver by profession.

Ramesh is engaged in the organisation of the party in the Ward for nearly two decades and his work has now been rewarded with the party allotting the ticket to his wife Shobha.

The Ward is reserved for Backward Class-B Woman category. The by-poll has been necessitated following the High Court order annulling the election of JD(S) Corporator Rukmini Madegowda from the Ward, who was elected as the City Mayor in February this year.

Following the announcement of her candidature,  the BJP candidate Shobha Ramesh filed her nomination papers at the MCC office here this morning, with today (Aug. 23) being the last day for filing of nominations.

The by-poll is scheduled to take place on Sept. 3 and the  counting of votes will be taken up on Sept. 6.

The JD(S) has fielded S. Leelavathi Mahesh, co-sister of former Mayor Rukmini Madegowda, who had represented the Ward and the Congress, Rajani Annaiah, who lost the 2018 MCC polls  to Rukmini.

The scrutiny of all nomination papers will be taken up tomorrow (Aug. 24) and the deadline for withdrawal of nomination  is Aug. 26.

Meanwhile the JD(S) and Congress candidates have made a headstart to the by-election by launching their campaign on a full-scale in the Ward last week itself. The BJP Candidate is expected to start her campaign from today.

With all the three major parties — BJP, Congress and JD(S) — having announced their candidates, the by-poll is expected to witness a close triangular contest.

In the polls held in 2018, the BJP had come a distant third after the JD(S) and Congress.