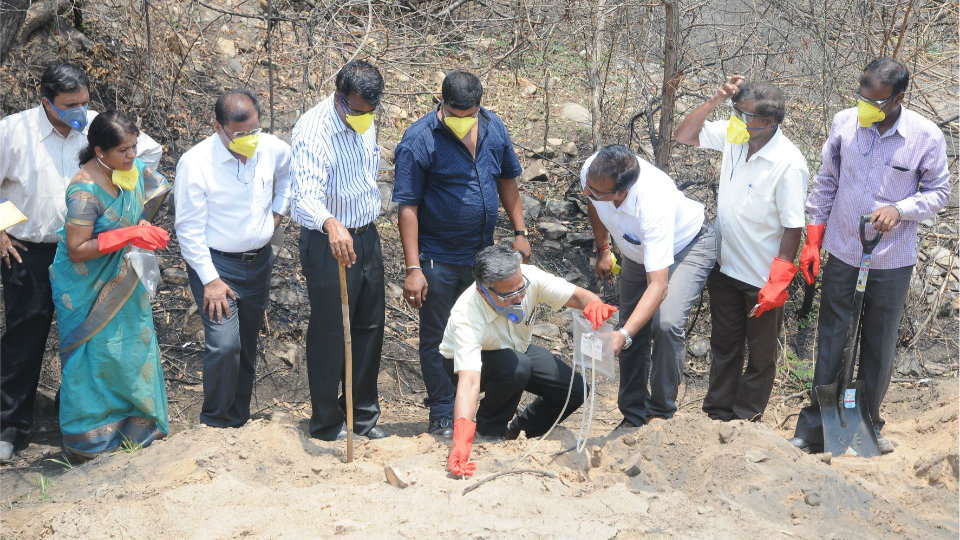 Mysuru: A team from Karnataka State Pollution Control Board arrived in city this morning to probe the mystery fire that occurred at Shyadanahalli near Belavatha that killed 14-year-old Harshal a  couple of days back. The 10-member team visited the spot and collected samples. 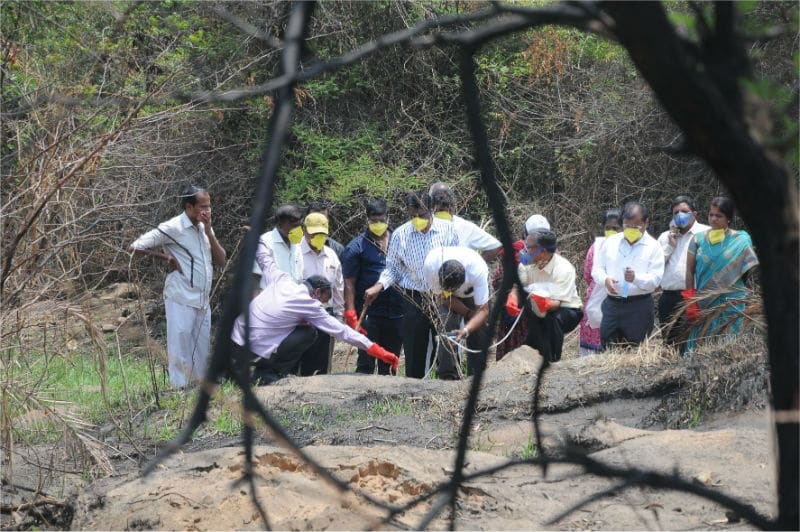 Using gloves and masks, the team collected samples from the accident site. Experts had brought airbags, pipes, blowers and other equipment. They inserted pipes inside the loose sand that has high concentration of chemicals and collected the gases that emit from the place. They also collected samples from a couple of places surrounding the spot. A JCB was specially brought to dig the ground around the area and samples were collected. A fire engine was stationed at the site as a precautionary measure.

Speaking to reporters after inspection, Lakshman said that an expert committee has been formed to probe the incident and it will submit its report in a couple of days.

“The samples will be tested for various emissions including carbon monoxide, sulphur and methane. We will also examine if there is a presence of organic and inorganic waste at the site,” Lakshman added.

He said that the type of waste dumped at the site will have to be analysed. “Once we establish the type of the waste, we will compare it with the effluents released by industries around the area. Stringent action will be taken against those who have been dumping untreated waste. Action will also be taken against officers who have permitted industries to dump waste,” the said KSPCB chief said. ‘WE HAVE NOT GOT COMPENSATION’

READ ALSO  What Caused The Fire In Shyadanahalli? Expert View!

Meanwhile, Murthy, the father of Harshal has alleged that though District In-charge Minister Dr. H.C. Mahadevappa had announced that Rs. 2 lakh would be given as compensation, the family was yet to get money.

Speaking to Pollution Control Board officials, Murthy said that except for the money (Rs. 1 lakh) given by BJP State President B.S. Yeddyurappa, he has not got any other money. “My son, who came to play here with his friends, paid with his life for the mistake of polluting industries. The entire area must be cleaned so that such incidents do not occur in the future,” he said.