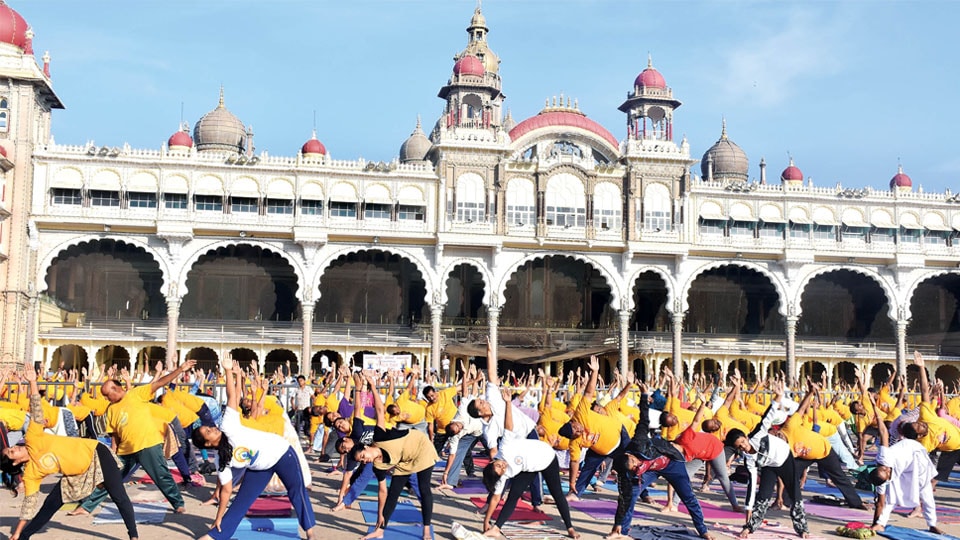 Derived from the Sanskrit word ‘Yuji’ meaning yoke or union, Yoga is an ancient practice that brings together mind and body. Every year, since 2015, June 21 is being celebrated as International Day of Yoga across the world, thanks to our Prime Minister Narendra Modi. In India, there is a sort of competition among cities including Mysuru to host the largest number of Yoga performers at a single venue. This year though Mysuru is not attempting a Guinness World Record, it has aimed to host 1.25 lakh Yoga enthusiasts at the sprawling Mysore Race Course. This Weekend Star Supplement sets the stage for the mega final rehearsal to be held on Sunday, June 16 and the main event on June 21.

Come June 21, all roads will lead to the sprawling Mysore Race Course at the foot of Chamundi Hill, where the Fifth International Day of Yoga will be celebrated with an hour-long orderly and disciplined demonstration. As a prelude to this, a mega rehearsal will be held at the Race Course on June 16, Sunday.

Though Mysuru District Administration and Yoga Federation of Mysore (YFM) are not eyeing another Guinness World Record this time owing to lack of time for preparations and financial constraints, they are confident of mobilising over 1.25 lakh yoga enthusiasts as a prelude to set the stage at least to attempt for the World Record next year.

Mysuru entered the Guinness Book of World Records for the Largest Yoga Demonstration or Lesson at a Single Venue during the 2017 Yoga Day. As many as 55,506 people performed yoga to achieve the record.

The District Administration, with support from YFM, Department of Tourism and AYUSH has made all efforts to gather 1.25 lakh people to perform Yoga and has been preparing since the last six months and conducted more than 40 rehearsals at different parks.

On June 21, all the seven gates of the Race Course  will be opened around 5 am for the participants to assemble and prepare for the demonstration. Many Traffic Policemen will be deployed to supervise traffic in the Race Course vicinity and surrounding roads. Participants will be asked to wear cotton cloth with white top and bring Yoga mats and small carry-bags to keep their footwear. This year, many schools have evinced keen interest to participate in the event.

In a way, organisers are prepared to highlight the fact that Mysuru is becoming a Yoga hub. Mysuru attracts a lot of tourists round the year. Once the capital of the kingdom of Mysore, it was the seat of the erstwhile rulers, the Wadiyars.

Mysuru is also the gateway to several national parks. Other than tourism, another reason for foreigners to visit Mysuru is Yoga. Like Rishikesh in Uttarakhand and Pune in Maharashtra, which are important Yoga destinations, Mysuru attracts many foreign nationals who want to learn the ancient art. Not just international visitors, enthusiasts from metros and IT sectors from key Indian cities also visit Mysuru to learn the ancient practice from Yoga gurus.

These stalwarts motivated a large number of students from the United States and Europe to learn Yoga. Pop star Madonna, rock icon Sting and Hollywood actor Gwyneth Paltrow were among the disciples of Jois. Importantly, the reason why Yoga got a firm grip on Mysuru is the fact that the Wadiyars patronised it.

Stakeholders in the tourism sector say that foreigners coming to learn Yoga often write about the magnificent palaces, heritage buildings, the temples around it and so on, in their respective countries, helping increase tourist arrivals, especially during the world-famous Dasara festivities.

The perception of Yoga has changed and people have started making it a part of their life. Dr. M.V. Murthy, President of Mysuru Yoga Okkoota says the change can be attributed to the international recognition Yoga got five years ago due to the efforts of Prime Minister Narendra Modi and others.

“Whether we make a record or not, we have made a good beginning since bringing together such large numbers in a short span of time will be a challenge.” he added.

President of Yoga Federation of Mysore (YFM) D. Srihari said there were about 300 to 350 Yoga centres in the city and 15 to 20 of them enjoy the patronage of foreigners.

Yoga which is a practice that connects mind, body and spirit through different body postures, meditation and breathing is promoted by these centres. Yoga aims to create perfect harmony between mind, body and spirit. It is a means that helps you achieve the greater good.

He said that the main intention of the Federation to make Mysuru the Yoga capital of the country as a large number of foreigners visit the city after Rishikesh, Haridwar and Pune and some other prominent Yoga learning centres in the country.

Apart from tourism and Dasara events, the city pulls people from all parts of the world because of yoga. In the initial days, a few hundreds of foreigners were learning Yoga at these institutes every year. But now their number has crossed 10,000. More number of them can be found during holiday season in December and January.

A majority of them join more than one institute during their stay and they primarily learn meditation or Pranayama. The influx of Yoga enthusiasts to Mysuru has also boosted local economy for accommodation, autorickshaws, hotels, Ayurveda Hospitals, local herbs and traditional medicines.

The other intention behind his Federation is to build “Arogya Mysore” as a lot of people now see Yoga, meditation, various asanas and breathing techniques as a remedy for stress, heart ailments and lifestyle diseases such as diabetes.

It has also been making efforts to send out a message that Yoga is not just for sadhus and sanyasis but also for common man as a majority of people of the region is still ignorant about its significance. For this year’s celebrations, the Federation has been making all preparations by training over 1,000 master trainers to in turn guide 1.25 lakh people on June 21.

“The city will grab the attention of media across the country by hosting such a mega event and it also helps development of tourism”, Srihari opined.

Exuding confidence that the Federation will definitely be successful in its endeavour of gathering 1.25 lakh people, he said that in the initial years of celebrations, the Federation was able to mobilise 10,000 people. Later it increased to 55,540 and reached 60,000 last year with the support of District Administration, Yoga Organisations and prominent mutts like Suttur Mutt.

This year, CFTRI, BEML and other Central Government Institutions, who were so far celebrating this day at their premises will join the main event to add to the numbers.

All set for event of twists and turns: DC

Deputy Commissioner Abhiram. G. Sankar said that District Administration has been making all preparations for the success of this big event.

As previous Yoga events and Dasara were successfully handled, this year there will not be much problem to make logistics arrangements. Various committees have been formed to ensure breakfast, maintain law & order and traffic management. Steps will be taken to prevent chain snatching, ensure safety of women, children and senior citizens.

Directions have been given to KSRTC to pick and drop people by deploying adequate buses to the venue. Mysuru City Corporation has been asked to maintain cleanliness, provide mobile toilets and drinking water at the venue.

Yoga Federation of Mysore is also deploying its 2,000 volunteers and master trainers to help the participants. The administration is also taking the help of NSS volunteers, Home Guards, Scouts and Guides for crowd management, he added.

What they say about Yoga

I have been practising Yoga since the last five years after my retirement and I am born and brought up in Mumbai. I hail from Saligrama village of K.R. Nagar taluk and presently I stay at Bogadi.

Earlier, I led a hectic life and there was no time to do Yoga though I was interested. After joining Sri Patanjali Yoga Shikshana Samsthe, I am finding a lot of happiness and I am physically and mentally fit. I am also teaching meditation and Pranayama techniques to my wife whose health is also improving a lot. Due to age factor, I was not able to bend my body. But I am trying some asanas.

Apart from learning, I am also teaching Yoga to participants at one of the branches of Sri Patanjali Yoga Shikshana Samithi.

I have been practicing Yoga since 22 years. I had a lot of health problems and was physically unfit before practising Yoga. But now, I am able to maintain good health by performing Yoga daily. I studied Mechanical Engineering, but now I am a full-time Yoga instructor.

Routine practice of Yoga helps not only control diabetes, but also helps in warding off depression. It keeps sugar levels under control as it assists pancreas to produce insulin.  This we call “Yoga Therapy” to regulate sugar level.

Present day, millions of youth are slipping into depression due to various reasons. Yoga helps ward off depression and keeps the youth agile and active throughout the day.

I have been practising Yoga since 12 years at GSS Yogic Foundation. I joined as a student when I was depressed and was simply crying and had lost hopes in life.

Today, I am working as a Yoga instructor. I used to suffer from a lot of health problems. But there are no such problems for me today. Yoga eases mental tension and keeps us energetic. Yoga for children helps in their physical and mental development.