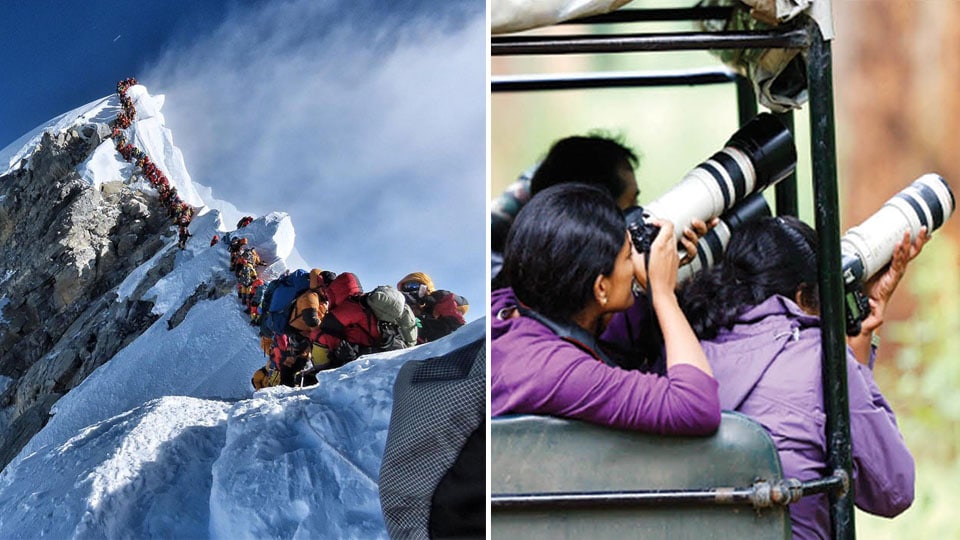 An Adventure for Social Media

Earlier this month, 11 people died in the Himalayas. But what was even more shocking was the photograph of the ‘traffic jam’ at 27,000 feet above sea level! This height is called the death zone. Among the reasons given for deaths, one was selfies at the summit.

One of the climbers who survived said that at the summit there were too many people, many of them untrained and wasting too much time taking selfies. No wonder a British newspaper ran a story about this with a headline titled:  “CAN’T TELL A CRAMPON FROM A TAMPON; Mount Everest deaths caused by selfie-obsessed climbers risking their lives for social media likes.”

Today, obsession for public validation has driven people to become overnight adventurers. In most cases there is no adventure at all. Before the world was possessed by Social Media frenzy, one had to prepare for the feat — one had to physically train hard, learn to read maps, research the flora and fauna of the area, learn camp-craft (putting up tent, making fire etc.), learn basic first-aid and survival skills. But today one has to just call an “adventure tourism company” and they will provide you a guide, a porter and off you go!

About 10 years ago, I trekked with some friends to the Himalayan Base Camp — the area from where people begin their ascent to Mt. Everest.  I trained for it by walking up Chamundi Hill every other day for a month. And that was enough because; We had a good guide, we had Sherpas carrying our bags, we were provided hot meals, we had hot water to bathe at some stops and we even had whiskey in one of the small hotels on the trail. All we had to do was carry our own body weight and a bottle of water.

In fact, I didn’t even wear a trekking shoe, even better, another person in our group who was walking up the Himalayas in jeans and a table-napkin wrapped across his face to protect his nose and mouth! He looked like he had come to rob a shop on the trail rather than trek. Yes, that is how causal adventure treks have become today.

Similarly the new adventure driven by social media is ocean-diving. I have a friend who is a dive master in Bengaluru and he says many of his clients after spending money do just one or two dives, take pictures, after which they don’t really care to dive again!

While pure-adventure is being made lame by social media validation, nature and wildlife too are bearing the brunt of it. I had recently been to Kabini for a safari. As I got into the safari-jeep, a few men in camouflage and big bags were already seated. For a moment I thought I was in an “army’s special force” vehicle heading off on a secret mission and expected these men to scream “how is the josh” any moment now.  But alas, though these men were dressed to kill they were there not to shoot to kill but shoot pictures.

Later what was to be a quiet observation of flora and fauna of Kabini turned into a clicking frenzy. The moment a bird or a big cat was spotted, these photographers would lay their cameras across other passengers’ face blocking their view. Even worse, they were forcing the driver to get closer to the animals.  I learnt that some photographers bribed guards to take them deeper into the jungle where no other photographer has gone before! I also noticed among most neo-wildlife photographers the length of the camera lens was directly proportional to their pomposity — longer the lens nastier the attitude, enhanced by ‘likes’ on social media for their photos.

READ ALSO  Cure is in Nature

That is why a group of professional wildlife photographers and conservationists have released a guidebook titled ‘Stop! Don’t Shoot Like That: A Simple Guide to Ethical Wildlife Photography’. The reason they did this is because as one of the authors said, “The craze for wildlife photography has increased, but unfortunately, there is no understanding of ecology or animal behaviour amongst most photographers. We have attempted to create awareness that the quest for the perfect shot may be detrimental for the species and how repeated off-roading on a wild landscape harms the ecosystem.”

Yes human adventures throughout history have always been recorded in some form or the other be it journals, photographs or autobiographies. A social media post could be an extension of this in modern times but there is something frivolous and hollow about it — adventures made easy, where the means don’t matter, just the end — a selfie for self-promotion.

Yes, indeed everyone has the right to experience the wild or climb a mountain. You may have worked hard to experience your adventure. But posting about your adventure as though it was just as risk-ridden as the mountaineers who carry their own bags, work the carabineers and ropes, make their own fire, cook their own food, put their own tent, read their own map and chart their own path, is what makes social media-driven adventures a farce.

Today social-media driven adventure is curated, unauthentic and insincere. It is like an expensive pair of torn jeans — it  “looks like” it has been through hell, it looks like each patch has a story to tell, but the truth is, it was manufactured to merely be a “look alike” of a pair of jeans that has actually been through hell.

Now, unfortunately as adventures are driven by the need for social validation rather than passion, it has reduced most adventures to a mere social media currency.