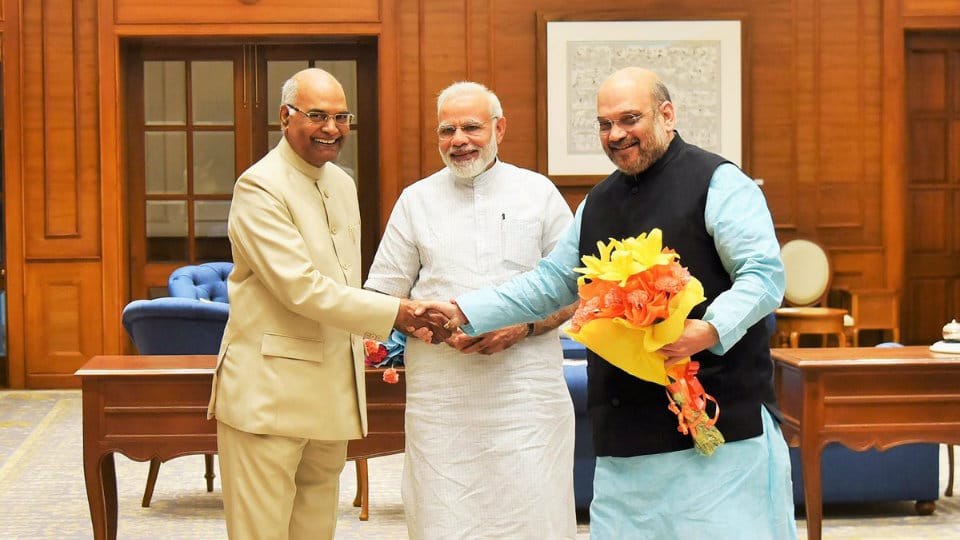 New Delhi: The ruling BJP yesterday announced Bihar Governor Ram Nath Kovind as its Presidential candidate. A politically significant choice, Kovind, a senior Dalit leader of the party, belongs to Uttar Pradesh and has been a two-time Rajya Sabha member.

To ensure consensus over his candidature, Prime Minister Narendra Modi spoke on the phone with Congress President Sonia Gandhi and former PM Manmohan Singh to communicate BJP’s choice to them.

Kovind, 71, has been the Bihar Governor since August 2015. He has been an advocate by profession and has practised both in Delhi High Court and Supreme Court. He has served as the President of the Dalit wing of the BJP. Kovind is likely to file his nomination on June 23.

Kovind, a farmer’s son, first stepped into politics in 1994 when he was elected as a Rajya Sabha member from UP. He served for two consecutive terms for 12 years till March, 2006. He represented India in the United Nations in New York and addressed the UN General Assembly in October 2002.

With the BJP coming up with a Dalit name, sources said, the Opposition camp is set to meet on June 22 to decide the future course of action. Opposition is considering a host of Dalit leaders, including Dr. B.R. Ambedkar’s grandson Prakash and former Lok Sabha Speaker Meira Kumar, as Presidential candidate.

Call it destiny or sheer coincidence, BJP’s Presidential nominee Ram Nath Kovind was denied entry to the President’s Shimla summer holiday resort barely three weeks back. The Retreat is located amid Shimla’s protected green belt.  Kovind, who is the Bihar Governor, was in town as guest of Himachal Pradesh Governor Acharya Devvrat between May 28 to 30 along with his wife and children. He was staying at the Raj Bhavan. Sources said that on May 29, he went to see Siyog, Shimla’s famous catchment area forest. While returning from the forest, Kovind chose to visit The Retreat, about 5 km away, along with his family but was denied entry by the staff posted there. Permission is granted only by the Rastrapathi Bhavan. As Kovind had not obtained permission from the Rastrapathi Bhavan, he was refused entrance.