Home » News » BJP on course for second term in UP, Uttarakhand 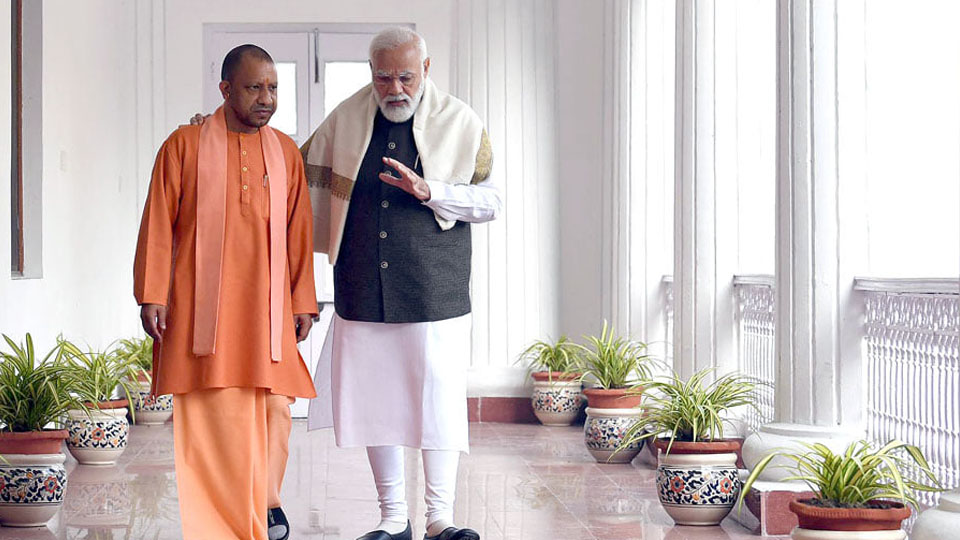 BJP on course for second term in UP, Uttarakhand

It’s PunjAAP as AAP sweeps away everyone in Punjab; BJP leading in Goa and Manipur

New Delhi: The Bharatiya Janata Party (BJP) is set to return to power in Uttar Pradesh (UP), the biggest State in the country, as the party has crossed the halfway mark in early rounds of counting. It will be for the first time since 1985 that a ruling party will be returning to power in the State. Counting of votes for 690 Assembly seats spread across five States started at 8 am today.

The elections to the five States — Punjab, UP, Uttarakhand, Goa and Manipur — had kicked off on Feb. 10. While the seven-phase UP polls ended on Mar. 7, the Manipur elections were held in two phases — on Feb. 28 and Mar. 5. Punjab went to polls on Feb. 20, whereas the election in Uttarakhand and Goa were conducted on Feb. 14.

As the results started flowing in, it showed that Congress, once a key player in UP, has been reduced to single digit. Akhilesh Yadav’s Samajwadi Party (SP)which took a major gamble by allying with smaller parties seems to have gone wrong. While SP is set to finish second, it may not even reach 150 seats.

Hindu monk-turned-politician Chief Minister Yogi Adityanath, the face of the BJP in the politically significant State, was ahead by 10,000 votes in Gorakhpur Sadar Constituency over his nearest rival. Mayawati’s BSP and the Congress have not moved past single digit in early leads — the exit polls were right in that regard.

Although the trends announced by the Election Commission of India (ECI) are slower than what TV channels display, they are more reliable. As per ECI, the BJP has taken a lead in 182 seats so far while SP is leading in 88 seats.

The Aam Aadmi Party (AAP) is leading in a majority of seats in Punjab, with Chief Ministerial candidate Bhagwant Mann leading while sitting CM Charanjit Singh Channi is trailing in both the seats he had contested. Other senior Congress leaders like Punjab Pradesh Congress Committee (PPCC) President Navjot Singh Sidhu and Speaker Rana Kanwarpal Singh are trailing in their respective constituencies, as per initial trends.

All eyes are on the high-stakes contest in the State where AAP has emerged as a major contender against the Congress, which is looking to retain power in the multi-cornered contest. Various exit polls have predicted that the AAP’s Bhagwant Mann will unseat the ruling Congress.

Congress leaders said the two-time Chief Minister’s defeat signals it was right about “the Captain” facing anti-incumbency in Punjab. In the previous election in 2017, Singh had won by a huge margin.

In early trends, the BJP was ahead of the Congress by leading in 19 seats in Goa as against 12 of the Congress. Goa Chief Minister Pramod Sawant said if numbers fall short, the BJP will take help from other parties.

READ ALSO  Legislative Council Polls from South Graduates Constituency and RS Polls: 'I am ready for an understanding with Congress to take on BJP'

With exit polls predicting a hung Assembly, Congress said it is open for forging an alliance with Mamata Banerjee-led Trinamool Congress (TMC) and even promised Ministry to Arvind Kejriwal’s AAP.

Chief Minister Pramod Sawant, however, exuded confidence in BJP winning a third straight term with more than 22 seats in the 40-member House.

Talking about early trends in Uttarakhand election results, it shows that BJP is dominating in the State, leaving behind Congress. BJP is leading in 44 seats in Uttarakhand.

At the start of counting, it was a head to head fight between BJP and Congress in Uttarakhand, but now, the ruling BJP has surged ahead towards a big majority.

Harish Rawat, the CM face of Congress in the State, is trailing. The BJP had won 57 out of 70 Assembly seats in the State in 2017, while the Congress had won just 11 seats.

BJP ahead in Manipur too

Election trends suggest that the BJP is headed to become the single largest party in Manipur Assembly as it is short of the majority mark of 31.

Meanwhile, Chief Minister N. Biren Singh has won from the Heingang seat by around 18,000 seats.

The turnout for the election to the 60-seat Manipur Assembly was recorded at 78.03 in the first phase of polling and 76.04 percent in the second phase.

The Assembly polls will decide the electoral fate of 92 candidates. When we went to Press, BJP was leading in 29 seats while Congress in just 7 and others in 24.