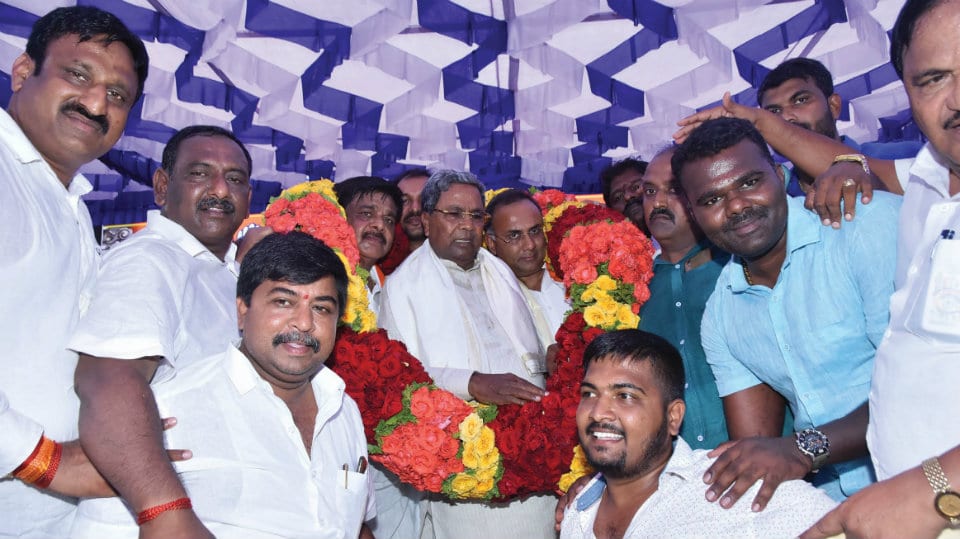 Addressing Congress workers after being felicitated at the Congress office near City Railway Station here yesterday, Siddharamaiah lashed out at PM Modi saying that the Prime Minister was moving around the country raising only emotional issues, while maintaining a stoic silence on burning issues that are haunting the country.

Claiming that the Congress Government headed by him was the only government in recent times to fulfill all pre-election promises, the Opposition leader  alleged that the Prime Minister is yet to come up with a single programme aimed at upliftment of the poor.

Expressing disappointment that people voted out his government despite having kept poll promises and doing a lot of developmental works, he said that the BJP gained from falsehood in last year’s Assembly polls. “The Congress Party workers have the responsibility of exposing BJP’s lies and sensitise the people on the Congress party’s numerous welfare programmes,”  he pointed out.

Assuring that the people were fed up with the BJP Government, the Opposition leader said that the people were waiting to teach the BJP a lesson by voting against it in the forthcoming by-polls. He asked the party workers to gear up for the by-polls and ensure the victory of Congress candidates.

‘Party workers misled me in Chamundeshwari’

Expressing regret that party workers misled him when he contested from Chamundeshwari assembly constituency in the last assembly polls, Siddharamaiah maintained that the party leaders assured him of a win, even though he stood on a losing ground.

Asking the party workers to be wary of the BJP’s false propaganda, he fervently appealed them to stay united at all times and give their best for bringing the congress back to power in the state.