Home » News » BJP will benefit from coalition’s lack of dharma 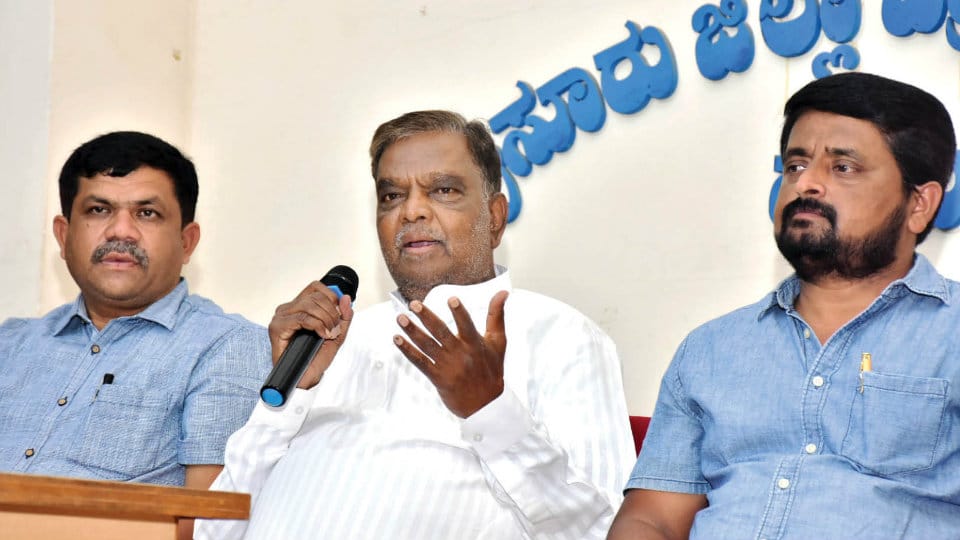 BJP will benefit from coalition’s lack of dharma

Mysuru: BJP is bound to benefit from the lack of coalition dharma among the Congress-JD(S) that has come together with the one point agenda of defeating Prime Minister Narendra Modi, said Chamarajanagar Lok Sabha BJP candidate V. Sreenivasa Prasad.

He was addressing the media at an interaction session organised by MDJA at Pathrakartara Bhavan here this morning and said, the victory of his party and his own is assured due to lack of understanding among the coalition partners.

Stressing why he was forced to contest in the LS elections though he had announced political sanyas from electoral participation but had said that he would be involved only in active politics, Prasad said that it was only due to the pressure from the party workers, his fans and well-wishers that he was forced to reverse his decision.

“I was very clear that I would not contest elections anymore and this decision I took after losing the by-elections in Nanjangud. I just went into retirement after that as I was both physically and mentally tired. But when people from every nook and corner of Chamarajanagar came to my house and forced me to participate I could not disappoint my voters and hence, decided to return to contest,” he said.

“However, the main reason for contesting was ‘Modi Wave’ in this election and his charisma and BJP State President B.S. Yeddyurappa’s insistence. The confidence of my 46-year-long political career apart from the experience as a Union Minister, Karnataka Minister and also fighting nine Lok Sabha elections, winning five and participating in 13 elections all put together is what made me contest again,” he said.

According to Prasad, the last five years of BJP rule showed how a stable Government can work and hence, people were clear that they wanted a stable Government and not a coalition of parties and people at the Centre. As far as the issues of communal and divisive politics were concerned, these issues came up only during the elections and not at other times. Even then in 2014 elections, BJP romped home 283 seats and if it was communal, how could it garner maximum votes from all classes of people, he asked.

Asked why he had not supported for a Dalit CM in the 2013 elections and brought in Mallikarjun Kharge, he replied that Dr. Parameshwara had lost the election and Kharge was the Leader of the Opposition at the Centre and hence, Siddharamaiah was chosen.

On whether it was friendship (coalition) versus BJP, he said: “It was not that but a fight between Dosti versus Dosti (friendship) even though the Congress and JD(S) have come together to fight the election on that platform. This was because a fight had started between the two parties in Mandya, Hassan and Tumakuru.”

Hence, he said that the coalition infighting would only benefit him and ensure his victory.