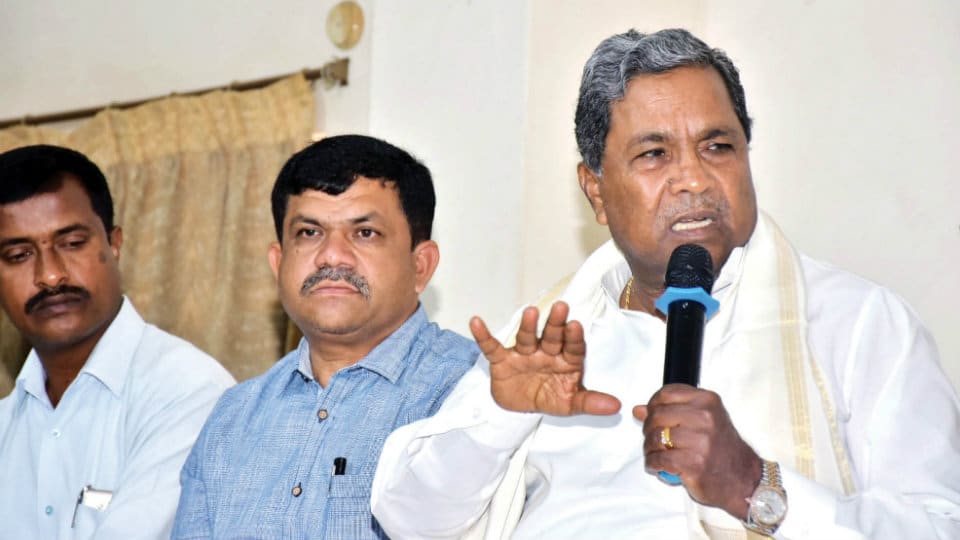 Mysuru: Asserting that the coalition candidates will win more than 20 out of the 28 LS seats in the State, Congress Legislature Party (CLP) leader and former CM Siddharamaiah has said, Congress-JD(S) entered into a Poll pact in order to defeat BJP.

Speaking at an interaction meet at Pathrakartara Bhavan here organised by Mysuru District Journalists Association (MDJA) this morning, Siddharamaiah said that Congress demanded the Mysuru-Kodagu LS seat from JD(S) as it had won 13 out of 16 times from here.

Dismissing reports that he was adamant on Congress getting the Mysuru LS seat, while ceding Tumakuru seat to JD(S), Siddharamaiah defended his party’s claim for the seat as it was a Congress bastion where JD(S) had failed to win even once.

Accusing Modi of harping only on emotional issues while ignoring to touch upon the burning issues that the country was facing, the CLP leader mocked the PM for using the Army’s valour in poll campaigns across the country.

Stating that India carried out 16 Surgical Strikes on Pakistan and four wars against it post-independence, Siddharamaiah said that the then Prime Ministers of the country did not harp on the attacks of Paksitan as Modi has been doing now.

Alleging that under Modi, the Intelligence Agencies had failed to issue alerts on the recent Pulwama attack, Siddharamaiah ridiculed Modi for taking credit for Army’s Surgical Strike on Pakistan post the Pulwama attack.

Replying to a query on Ram Mandir issue, he said that BJP will take up Ayodhya issue only during Polls for electoral benefits. Pointing out that Modi was in power for the past 5 years and earlier, Vajpayee headed the NDA Government for 6 years from 1998 to 2004, the former CM wondered what was BJP doing when its party was in power at the Centre for so many years.

Referring to Lokpal, Siddu said that the Centre has appointed Lokpal only recently after the Supreme Court ruling, which clearly explains that the BJP was not interested in rooting out corruption.

Stating that Modi’s promise of ‘Achhe Din’ never came, he claimed that the prices of essential commodities had soared in the past 5 years and the common man was finding it hard to lead a decent living.

Alleging that the Modi Government had failed to bring back black money stashed abroad, as promised, Siddu said that the GDP growth had fallen due to the BJP Government’s policies.

Replying to a question on I-T raids, Siddu lashed out at the I-T and ED for targeting only Congress and JD(S) leaders. He questioned why the I-T and other agencies had not acted against any leaders of the BJP, which had made attempts to poach Congress MLAs by offering them huge sums of money.

Accusing I-T and ED of acting under Modi’s instructions, he said, though he was not against raids on tax evaders, he would strongly condemn selective raids targeting only Opposition leaders.

Maintaining that this joint campaign with JD(S) Supremo H.D. Deve Gowda and District Minister G.T. Devegowda would certainly help the Congress candidate in Mysuru-Kodagu LS seat, the CLP leader reiterated that  he was sure of coalition candidate’s victory from Mysuru.