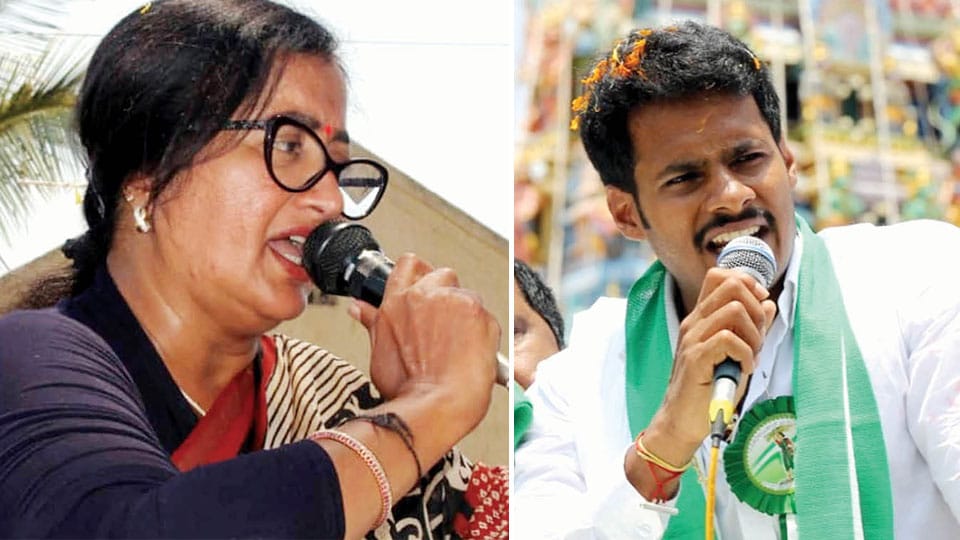 Mandya: Mandya Lok Sabha Constituency in Karnataka, known as the sugar bowl of the State, is witnessing a high-voltage poll battle between the JD(S)-Congress coalition candidate Nikhil Kumaraswamy and independent candidate Sumalatha Ambarish.

With young cinema actor Nikhil (son of Chief Minister H.D. Kumaraswamy) contesting as JD(S) candidate and senior actress Sumalatha (wife of late actor-turned-politician Ambarish) fighting it out in a neck-and-neck race, the battle lines have been drawn and a nail-biting climax is on the cards.

It is a high-stakes battle for Kumaraswamy as a loss to his son would mean that his post as Chief Minister may get a jolt and even result in the wobbling coalition Government’s fall. The BJP, which is giving outside support to Sumalatha, says that the result which is in her favour may lead to the fall of the coalition Government post May 23 counting of votes.

Comprising eight Assembly segments — Malavalli, Maddur, Melukote, Mandya, Srirangapatna, Nagamangala and K.R. Pet in Mandya district and Krishnarajanagar (KR) in Mysuru district — the Mandya Lok Sabha Constituency is considered a safe seat for the JD-S as it had won all the eight seats in the 2018 Assembly polls.

But the equation is not the same in this bitterly fought battle as LS polls is a different ball game. Mandya is also the home district of the former Chief Minister S.M. Krishna, now a BJP leader — that is the reason why the electoral battle in the Constituency is being keenly watched.

While Nikhil, the third generation member of H.D. Deve Gowda (JD-S supremo and former PM) family, is banking heavily on the name of his father Kumaraswamy, Sumalatha hopes to ride on the sympathy wave following the demise of Ambarish in November last year. As per the seat-sharing deal between the coalition partners — JD(S) and Congress, the Mandya seat went to JD(S).

Mandya is a stronghold of JD(S), which had won the LS seat during 2014 and the by-election after sitting Member of Parliament C.S. Puttaraju was elected to the Assembly and became a Minister in Kumaraswamy Cabinet in 2018. Ambarish, a native of Doddarasinakere in Maddur, has a large fan following in the district. His popularity as a film actor earned him a big fan following and Sumalatha is banking on the fans and followers of Ambarish to see her through.

As far as Nikhil is concerned, the plus point for him is that he is the son of the CM and has the full support of all the eight MLAs falling under the LS segment, who all happen to be JD(S) Legislators. However, reluctance among Congress cadre to support him as the two parties remained bitter rivals until a few months ago may cause a flutter. Kumaraswamy had also announced many doles for Mandya in the Budget presented by him in February last, which Nikhil hopes will be advantageous for him.

Kumaraswamy extensively canvassed for his son and is virtually camping in the district. However, the crisis continued with their coalition partners (Congress leaders) in the district refusing to campaign for JD(S) nominee. This had resulted in as many as seven Block Congress Presidents being suspended from the party. This may hurt JD(S) as a whole.

The leaders of coalition partners, however, tried desperately to make amends and stem the disgruntlement by jointly campaigning with Deve Gowda and former Chief Minister and Coordination Committee Chairman Siddharamaiah. It remains to be seen whether the two parties will be able to pull off a result in favour of JD(S) as Sumalatha is gaining ground and receiving huge support from the voters.

The coalition partners also roped in AICC President Rahul Gandhi to an election rally at K.R. Nagar to bring down the dissident activities. Making a strong point, Rahul warned the Congress workers to support the                    coalition candidate not only in Mandya but also all other JD(S) candidates including Deve Gowda and his another grandson Prajwal Revanna in Hassan. He also asked the JD(S) workers to strive for the success of the Congress candidates and follow the ‘Coalition Dharma.’

Although Sumalatha has the backing of the film industry, she has drawbacks too and one of them is that she is contesting as an independent and not as a candidate of the Congress, which her late husband was associated with for long. But Sumalatha has the backing of BJP State Unit President B.S. Yeddyurappa, who also hails from the district and Prime Minister Narendra Modi himself speaking kindly about the contributions made by Ambarish.

The election campaign has witnessed a battle of attrition with leaders of JD(S) including Kumaraswamy hitting out at Sumalatha. His brother and PWD Minister Revanna was more scathing in his attack saying that why she should have contested an election within months of the demise of her husband. This statement was condemned across the political spectrum.

The tag that he is an outsider and has no political experience, the controversial statements by JD(S) leaders against Sumalatha, may prove to be a hindrance for Nikhil, who is heavily banking on his father’s image and support from local JD(S) leaders.

Mandya district is considered the ‘heartland of Vokkaligas.’ However, it is a fact that people from Other Backward Classes (OBC), Scheduled Castes, Scheduled Tribes and minority communities will decide the fate of the candidates. Vokkaligas command around 35 to 38 per cent of votes in Mandya. The agriculture and horticulture sector are ridden with problems in the Constituency. Paddy, sugarcane, tobacco and coconut are major crops in the region.

After an interesting battle in the 2013 by-election, actor-turned-politician Ramya contested from the Congress and Puttaraju from JD(S). Ramya had defeated Puttaraju by 67,611 votes in 2013. However, Puttaraju won the 2014 elections by defeating Ramya with a small margin. Mandya district, though a Vokkaliga heartland, the OBCs, SC/ST and minority voters may ultimately decide the result this time.