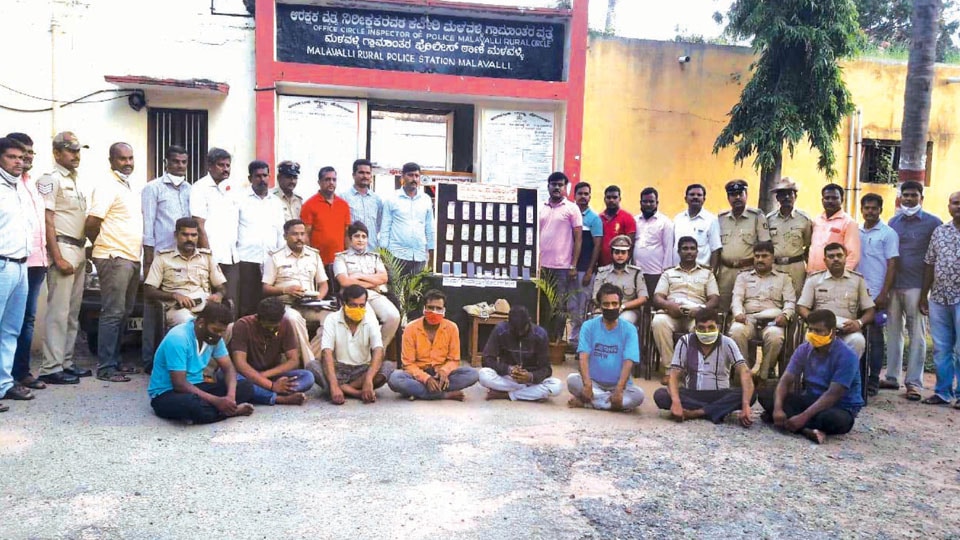 Malavalli: Social media has become a hub for fake news these days. So many rumours and speculations are also transmitted there. The latest rumour that is doing the rounds on the internet is mercury tubes or red mercury, which is mostly found on old electronics such as televisions and radios.

Some people particularly pick up old types of radio as well as black-and-white television sets based on the rumours that they fetch lakhs of rupees in the market and certain websites are ready to offer high prices for them. Many people offer as high as Rs. 20,000 to Rs. 1 lakh for old TV sets.

Though there is no scientific study proving the uses of red mercury, mostly these rumours are the handiwork of a gang which perhaps wants to make money through propaganda. In the past too, people were duped with things like “Nagamani”, rice pulling utensil, double-headed snakes, pitchers which turned lucky after lightning struck them, etc. Now they are using the bait of red mercury to cheat the gullible people.

A software engineer from Bengaluru has been cheated of Rs. 22 lakh by a gang after promising to deliver the ‘precious’ red mercury tube. The eight-member gang has been arrested by the Malavalli Police and have seized Rs. 10.36 lakh from them.

The arrested have been identified as Nagendra Babu alias Babu and C. Rajesh from Devangapet in Kollegal, Sannu alias Afghnan Ahmed and Sajid Ahmed of Galipura in Chamarajanagar Rajesh from Hanur, Suresh Murthy, T. Umesh and D. Umesh from Kanakapura. A car and a bike that were used for the crime have been seized. A press conference was held at Malavalli Dy.SP Office in this regard yesterday where Mandya SP K. Parashuram gave out the details of the crime.

Nithin Raj, a software engineer and a resident of Bengaluru had sent out a message in social media platforms that his friend requires red mercury tubes used in old radios and TV sets for the purpose of making a satellite prototype. Seeing the message, Nagendra Babu contacted Nithin Raj’s brother and told him that he had two mercury tubes and he would sell them for Rs. 30 lakh.

This was conveyed to Nithin Raj and he agreed for the deal and negotiated with Nagendra Babu for over 10 days. On June 27, Nithin Raj took Rs. 26 lakh cash and went to meet Nagendra Babu who had called them to the outskirts of Malavalli near Kunigal. On reaching the spot, Nagendra Babu told Nithin Raj and his brother that as it was a secret operation, they must head to a secluded place to escape the eyes of the Police.

Accordingly, they moved near Kalabhairaveshwara Temple where the negotiation took place. After Nagendra Babu made sure that Nithin Raj had brought cash, a few men (other accused) dressed as Police arrived at the spot in a car. Seeing the Police and as part of the plan, Nagendra Babu fled the scene on his bike.

Babu then convinced Nithin Raj to deposit Rs. 5 lakh in a bank in Kollegal and told him that as soon as the cash was deposited, the two mercury tubes would be delivered. Nithin Raj deposited Rs. 5 lakh hoping to get hold of the mercury tubes. But Nagendra Babu never turned up to deliver the tubes.

Nithin Raj thought that as the mercury tube sale and procurement was illegal he did not lodge a Police complaint. But as it later dawned on him that he has been cheated, he filed a complaint on July 17 leading to the arrest of 8 persons. The Police team was headed by Malavalli Dy.SP Pruthvi.

A cop and a home guard

Investigation revealed that one of the accused Suresh Murthy was a Police Constable and he was dismissed from service five years back. Another accused C. Rajesh is a home guard and both had planned to cheat Nithin Raj. After the gang was nabbed, Nithin Raj gave a second statement mentioning that he was cheated of Rs. 22 lakh.

What is red mercury?

As the name suggests, it is a red liquid — Red Mercury (Hg) — that is rumoured to be an expensive compound. Though it has mercury in its name, there is no proper documentation to reaffirm the same. According to posts that are circulating across the internet, most of the old monochrome televisions contain this liquid in a tiny glass bottle like a container. It is said that a gram of this liquid is worth more than Rs. 10,000 and the liquid is used to make bombs.

The Police have asked people to inform the Police if anyone approaches them seeking to acquire red mercury as sale and purchase of red mercury is a punishable offence.