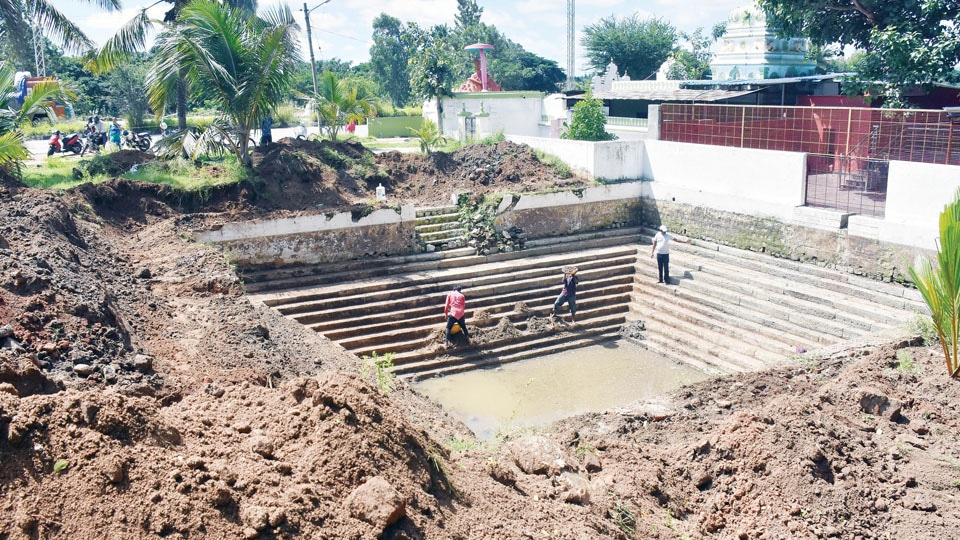 Rejuvenation of Kalyani adjacent to Siddalingapura Temple on Mysuru-Bengaluru Highway

Mysore/Mysuru: Namma Mysuru Foundation, which has been directed by the Mysuru City Corporation (MCC) for construction of two heritage toilets at Town Hall and People’s Park in keeping with the rich heritage tradition and architectural characteristics of the cultural city, has now taken up rejuvenation of the defunct Kalyani (Temple Pond) adjacent to the famous Subramanyaswamy temple at Siddalingapura on Mysuru-Bengaluru Highway.

The area around Kalyani, which was completely covered with wild growth of bushes and weeds, had become a place for illegal activities, especially during the night.

It all started a few days ago when a temple priest by name Subramanya, evincing interest in rejuvenating the Kalyani, sought the construction team of Namma Mysuru Foundation (NMF), which was at work at a nearby site, a Hitachi machine for cleaning up the Kalyani. After learning that the Temple Kalyani had become defunct, Dasharath of Namma Mysuru Foundation visited the spot and assured  Subramanya and other temple authorities of rejuvenating the Kalyani.

Soon, the works began with the weeding out of bushes around the Kalyani, which has 21 steps. Also the silt in the pond will be removed and all the water entry points to the Kalyani will be cleared of all blockings.

The NMF has also proposed to construct a wall around the Kalyani after the rejuvenation works are completed, according to Dasharath, who further said that the NMF has also plans to renovate Subramanyaswamy temple on the ever-busy Mysuru-Bengaluru Highway at Siddalingapura in the coming days.