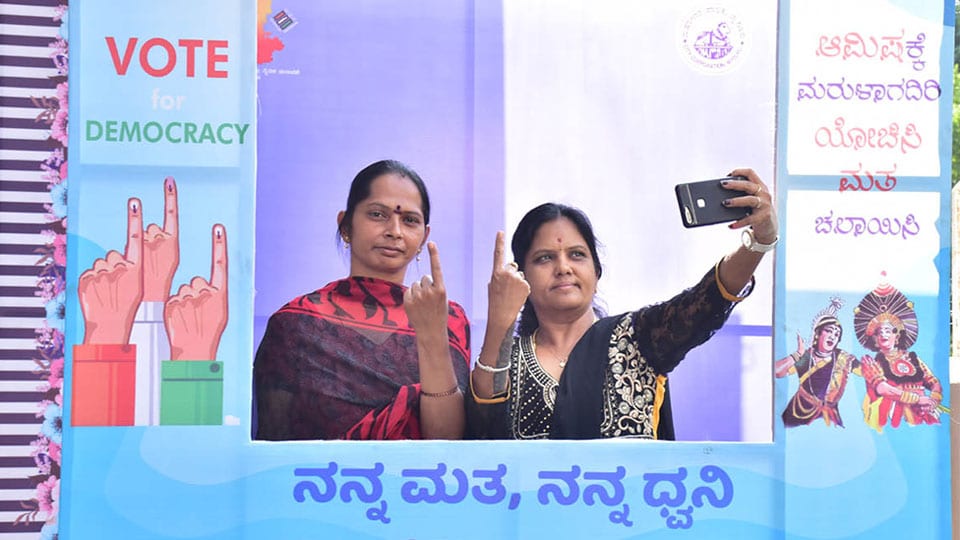 Mysuru: Amidst the promises of 33 per cent reservation for women in Parliament in the election manifestos of both the Congress and BJP comes the news of at least the Election Commission of India giving some importance to women by setting up separate polling stations for them.

The polling stations called ‘Sakhi’ have been set up with the cooperation of SVEEP (Systematic Voters’ Education and Electoral Participation) in a bid to encourage more female voters to exercise their franchise. In the Mysuru-Kodagu Lok Sabha Constituency limits 22 ‘Sakhi’ centres have been set up.

In city’s K.R. Assembly segment, a ‘Sakhi’ centre has been put up at Akkana Balaga Mahadevi Higher Primary School on Tyagaraja Road. All those deployed at such polling stations — Police, election officers and other employees — will be women.

The welcome arch at the booth is painted in purple colour (jamun fruit colour) and pictures of two women in purple saree and yellow blouse showing the left hand forefinger looks very attractive.  It also displays the messages ‘People-friendly Polling Station,’ ‘Namma Nade Bhavya Bharatada Kade’ (Our Step towards Grand India), ‘Nanna Mata, Nanna Dhani – My Vote, My Voice’ can be seen both in Kannada and English.

Inside the polling the place where the EVM will be placed is covered with a sheet for secret balloting and displays a map of Karnataka with words ‘Polling Booth Managed Fully by Women’ and also the name ‘Sakhi’ with the profile of a woman with flowing hair.

‘Amishakke Olagagadiri Yochisi Mata Chalayisi’ (Do not be lured by allurements, Think and Vote), ‘Vote for Democracy’ board is also displayed which has the picture of two women taking selfies. These boards have been specially prepared by Mysuru City Corporation, said MCC Commissioner Shilpa Nag.

Apart from this, 11 Tribal Polling Stations, 7 specially-abled centres have been set up for the benefit of Girijana Haadi voters, physically challenged and senior citizens. Deputy Commissioner Abhiram G. Sankar, who is also the Electoral Officer, visited all the booths yesterday and inspected the preparations.