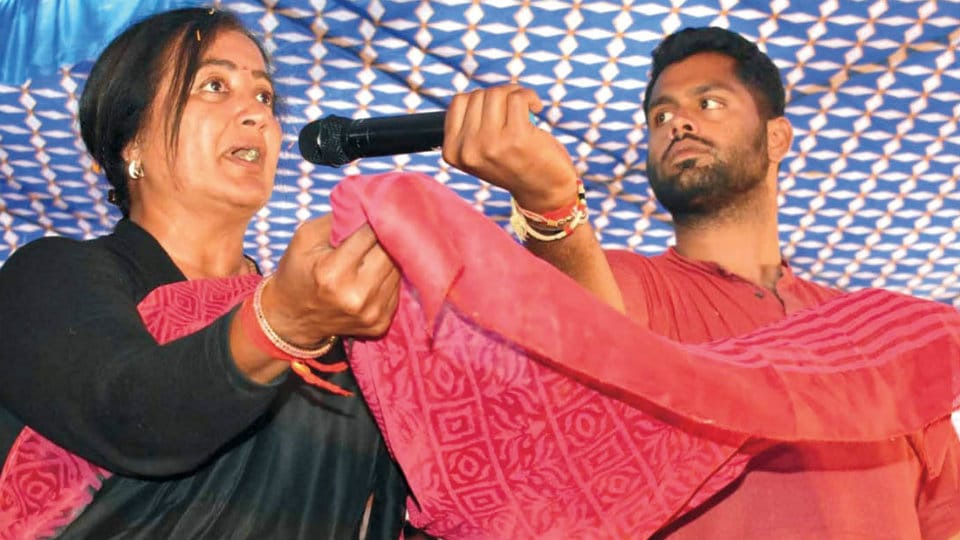 Mandya: Begging for votes by raising the issue of self-pride, actress Sumalatha Ambarish yesterday made an emotional appeal to the people to vote for her and thus give her a chance to serve them.

Addressing a massive gathering at the Silver Jubilee Park ground here on Tuesday, the last day of public campaigning, Sumalatha attempted to strike an emotional chord with the people, when she broke into tears.

Emotionally appealing the people to elect her, Sumalatha exhorted voters to exercise their franchise and not to fall prey to the allurements of JD(S).

Asking the people of Mandya not to trade their self-pride and prestige, she made a fervent appeal to the electorate to support her as they did to her late husband Ambarish. Stating that she saw the Almighty among the people of Mandya, she said she was thankful to Congress leaders and workers who have supported her.

Alleging that power was disrupted once again on Tuesday and pointing out that JD(S) brought AICC President Rahul Gandhi, Andhra CM Chandrababu Naidu and scores of top Congress leaders to campaign against her, Sumalatha wondered whether the JD(S) was so frightened by her candidature and campaign.

Urging the CM not to talk lightly of cinema actors, Sumalatha shot back at the CM saying that his (CM) son too was an actor.

Defending the active campaign of actors Darshan and Yash in her support, Sumalatha maintained that the actors were like her children and did not use unparliamentary language against the opponents.

Recalling her campaign for the past one month, she thanked the KRRS, the Congress workers, BJP leaders, Dalit organisations, Muslim leaders and other community leaders for extending their whole-hearted support to her.