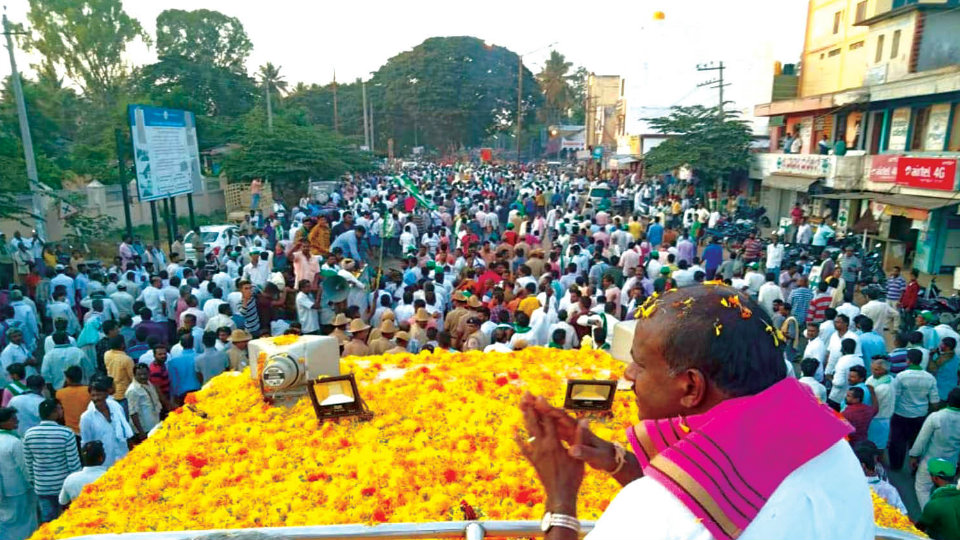 HDK sees plot to dethrone him by defeating son Nikhil

Mandya: CM H.D. Kumaraswamy (HDK) undertook a brisk campaign across Mandya LS constituency from where his son Nikhil is contesting as the coalition candidate, on the last day of public canvassing yesterday.

Starting his campaign from Taggahalli, HDK said that he sees a plot to dethrone him from the CM’s chair with the defeat of his son. Pointing out that the people have elected JD(S) MLAs from all the 7 Assembly segments of Mandya in last year’s Assembly polls, HDK highlighted his achievements over the past 11 months as the CM.

Claiming that the JD(S) would do everything for the welfare of the farming community, he said providing drinking water to all villages was amongst his top priorities.

Appealing the electorate to send Nikhil to Parliament, the CM said that Nikhil would be the voice of the farmers in Parliament. Listing out his plans, Kumaraswamy said, revival of the prestigious MySugar factory, clearance of sugarcane farmer dues, improvement of irrigation systems and creation of jobs are on top of his agenda.

Lashing out at the independent candidate, Kumaraswamy appealed the voters to make a wise choice between the one who is gimmicking and the one who stands solidly behind the farmers and works for development.