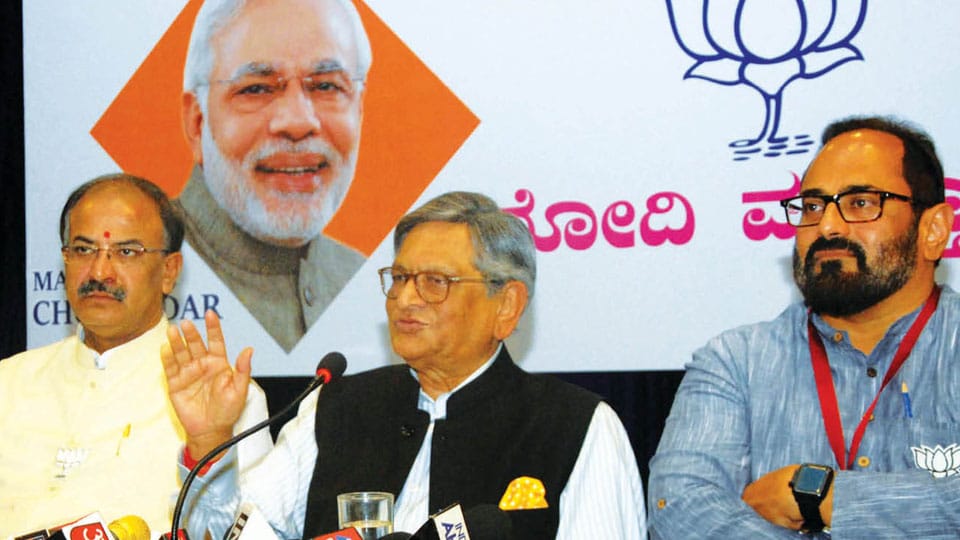 Addressing newsmen here on Tuesday, he came down heavily on the AICC Chief and said that the Supreme Court had issued notice to the Congress leader for his immature statement on the ‘chowkidar chor hai.’

“Let us see what explanation the Congress President will give to the Supreme Court,” he said.

Charging that the Prime Minister during the UPA regime was controlled by ‘remote control’, the BJP leader, who was once part of the Manmohan Singh Government at the Centre, said: “Prime Minister Narendra Modi had provided a stable Government sans any remote control in the last five years.”

Showering praises on the NDA Govt. he said, “Thanks to his (Modi’s) leadership, country could evolve a unified tax system for the entire country, taken several decisive measures, and provided a new dimension to the Swachh Bharat Abhiyan in the country.”

“Only Modi can provide an aggressive push in finding solutions to the teething problems of the country,” Krishna said. Stating that he had not seen any PM in the past, who had devoted more than 18 hours of a day for the upliftment of the nation, the former External Affairs Minister said: “Prime Minister Modi has no other ‘hobbies’ than working for the country for extended hours.”

“Working for extended hours in a given situation, is different, than making it a routine,” he said.

READ ALSO  ‘Let BJP see their own back’: CM reacts to BJP’s corruption charges against Congress

Referring to former Prime Minister H.D. Deve Gowda’s statement that he will prevent Modi from coming to power, he said that “during 2014 elections, Gowda wished Modi not to come to power, this time also the JD(S) leader is wishing the same.”

“Deve Gowda cannot prevent Modi from coming to power at the Centre physically. This is democracy, the people have the ultimate power,” he said.

Criticising that the JD(S) leaders in Karnataka were working towards strengthening their-own family members, he said: “We can understand why they are shedding tears in the public. Because they are scared of the defeat of their kin in this Lok Sabha election.”

Refuting the charges that I-T authorities are conducting raids on targeted parties, he said: “It is not correct to attribute any motives against Central agencies.”

The former CM, while appealing all the voters to exercise their Constitutional rights by visiting Polling Stations without fail, also prayed them to vote for BJP.

9 COMMENTS ON THIS POST To “AICC President a person with ‘unlimited immaturity’: S.M. Krishna”