Home » News » BJP will return to power with 140-plus seats: Former CM Yediyurappa 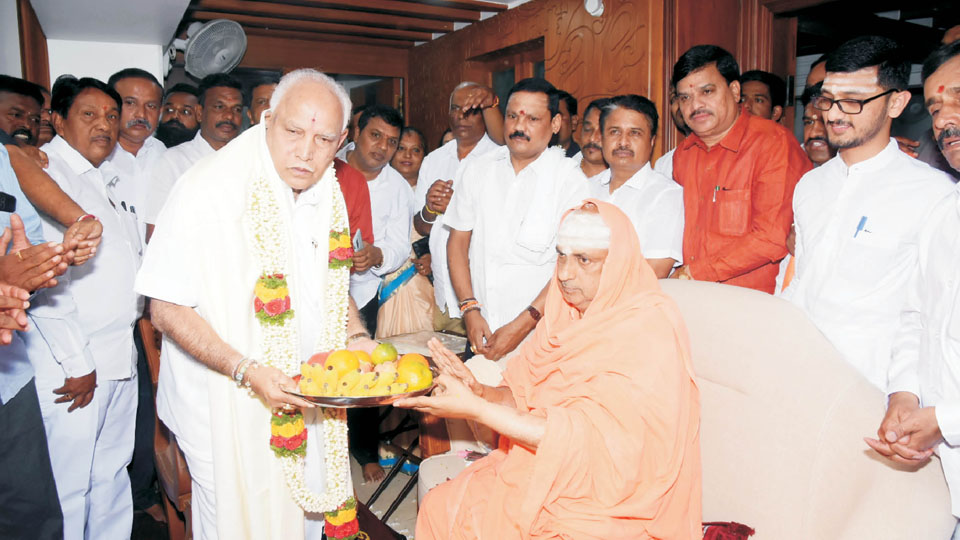 BJP will return to power with 140-plus seats: Former CM Yediyurappa

Mysore/Mysuru: Former Chief Minister and senior BJP leader B.S. Yediyurappa (BSY) asserted that the BJP would return to power with a thumping majority by winning more than 140 seats in the forthcoming Assembly polls.

He was speaking to press-persons at Suttur Mutt here this  morning, where he sought the blessings of Sri Shivarathri Deshikendra Swamiji and had breakfast there. BSY had arrived in the city last evening and stayed overnight.

Lashing out at the Opposition Congress for making baseless charges against the BJP, Yediyurappa maintained that there is a BJP wave in the State and the Congress is disturbed over it. Stating that he will undertake a tour of the entire State after Apr.1 for organisation of the party, the former CM said he was happy that the party workers have been successful in delivering the benefits of various State and Central Government schemes to the doorsteps of beneficiaries, which is crucial for the poll success of a party.

When asked about the chances of poll advancement in the State, BSY said that there is no such move and such speculations will arise whenever Amit Shah happens to visit the State.

Replying to a question on change of leadership, Yediyurappa said that there is no change and Basavaraj Bommai will continue as the CM.

“Bommai will lead the party in the coming Assembly polls and no one need to have any doubt regarding this. All speculations regarding change of leadership are baseless and there is                           no need to pay heed for them,” he said.

When asked about BJP’s strategy for Karnataka polls, in the wake of the party’s recent poll success in five States, BSY said that the party will have to strategies on taking along all communities coming under SC/ST and OBC categories on a much larger scale.

Arguing that women em-powerment is also crucial for poll success, the ex-CM said the party will work towards making the initiative cent percent successful. Stating that ‘Nari Shakti’ is a crucial factor, he said the BJP Government has done more for empowerment of women than any Government in the past.

Yediyurappa later left for Virakta Mutt in Yelandur by road.

8 COMMENTS ON THIS POST To “BJP will return to power with 140-plus seats: Former CM Yediyurappa”