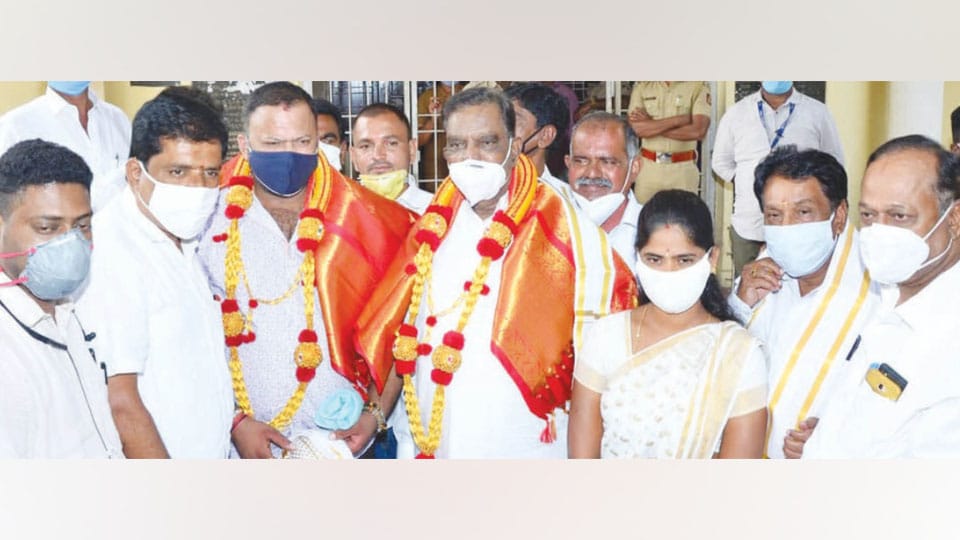 Nanjangud: As expected, BJP won the President and the Vice-President posts in Nanjangud City Municipal Council (CMC) in the elections held on Monday. This is the first time that the BJP has won both the posts on its own in the CMC.

BJP had won 15 seats, Congress 10, JD(S) 3 and Independents 3, in the polls held over two years ago. Mahadevaswamy is a two-time member of  Ward 24, while the newly elected VP Nagamani represents Ward 31.

Mahadevaswamy of BJP, who bagged 21 votes, including that of JD(S) Member Girish Babu, Independent Members N.S. Yogesh, Mangalamma and Yogish, MP V. Sreenivasa Prasad and Nanjangud MLA B. Harshavardhan, defeated Srikantaswamy of Congress, who could manage only 10 votes.

Nagamani, who also bagged 21 votes, defeated her rival Shwethalakshmi Satishgowda of Congress, who bagged only 10 votes.

Following the polls, Electoral Officer Venkataraju declared that H.S. Mahadevaswamy has been elected as President and Nagamani Shankarappa as Vice-President of Nanjangud CMC.

Soon after the announcement, BJP workers burst crackers in celebration in front of the CMC office.