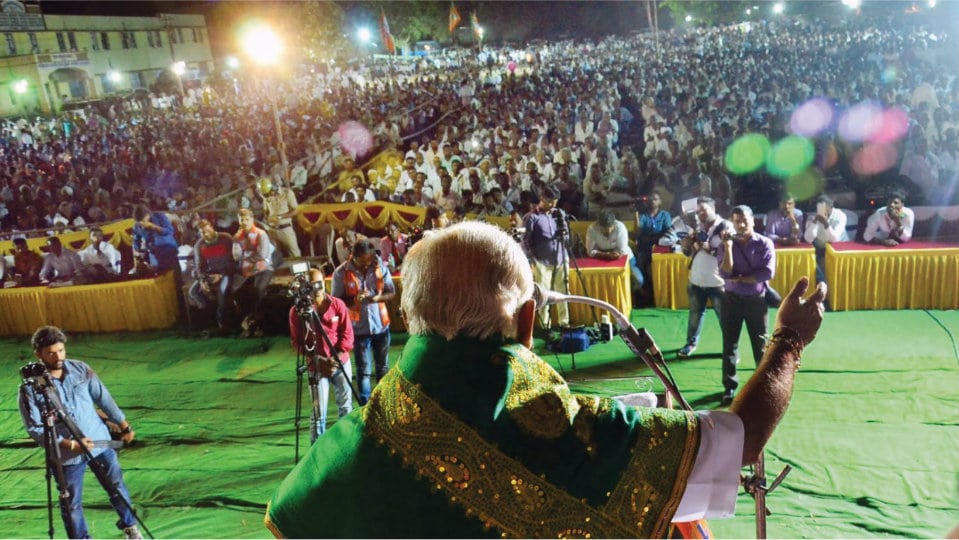 Mysuru: Already in election mode in Karnataka, State BJP President B.S. Yeddyurappa, the party’s declared CM candidate, is travelling across the State as if he has fixed wheels to his legs. His aim is to bring down the Congress Government that is at present ruling the State.

He was in Mysuru this morning to address a press conference as part of ‘Nava Karnataka Nirmana Parivartana Yatra’ to be held at Maharaja’s College Grounds on Jan.25.

Star of Mysore caught up with him for an exclusive interview before he addressed the Press.

Excerpts of the interview:

SOM: You have been holding Parivartana Yatra across the State since Nov. 2. How many rallies you have attended?

B.S. Yeddyurappa: The party started the rally on Nov. 2 and it is Nava Karnataka Nirmana Parivartana Yatra. As its name suggests, it is for a change as desired by the people. So far, I have attended 118 rallies covering 218 Constituencies and by Jan. 25, all the 224 constituencies will be covered including the Chamaraja, Krishnaraja and Narasimharaja in Mysuru. I will go to Periyapatna today and cover Kodagu tomorrow.

SOM: What gives you the strength?

Yeddyurappa: I am 76 years old and so far, I have travelled for 84 days, non-stop. I have not taken a break. Every day I wake up at 5 am and do my regular exercises including a morning walk. I hit the road at 7 am after discussing with my local supporters and party activists.

Yeddyurappa: I eat whatever the local people offer. I don’t have a diet plan and I don’t travel in specially-designed swanky vehicles. I take care to consume a lot of water and eat hydrating and nutritious food to keep myself active and going. After a day’s hectic campaigning, I retire to bed at 11 pm.

SOM: How was the response to your rally?

Yeddyurappa: By God’s grace I have not fallen ill despite my hectic schedule. Even the people have given me strength to fight. Wherever I go, I have seen tremendous response. Youths come in hundreds of bikes and join me in rallies. This response is making me stronger by the day. Rally attendees have boosted my morale and spirits and I am sure that BJP will achieve its ‘Mission 150’.

SOM: What is the main objective of the rally?

Yeddyurappa: My aim is to overthrow the corrupt Siddharamaiah-led Congress Government in Karnataka. He is practicing divisive politics. I have covered three assembly constituencies per day where the failures of the Siddharamaiah government and the achievements of the Modi government at the Centre and of the BJP regime in Karnataka from 2008 to 2013 were highlighted.

SOM: What will be your next plan of action after completing the 224 constituencies?

Yeddyurappa: I will not rest till BJP comes back to power. My rallies and meetings in select pockets will continue. As you can see no other political party has been able to match our Parivartana Rallies. People of Karnataka need change and they have made up their minds. The result, you will see in a couple of months.

3 COMMENTS ON THIS POST To “BJP’s Battle for Ballots”