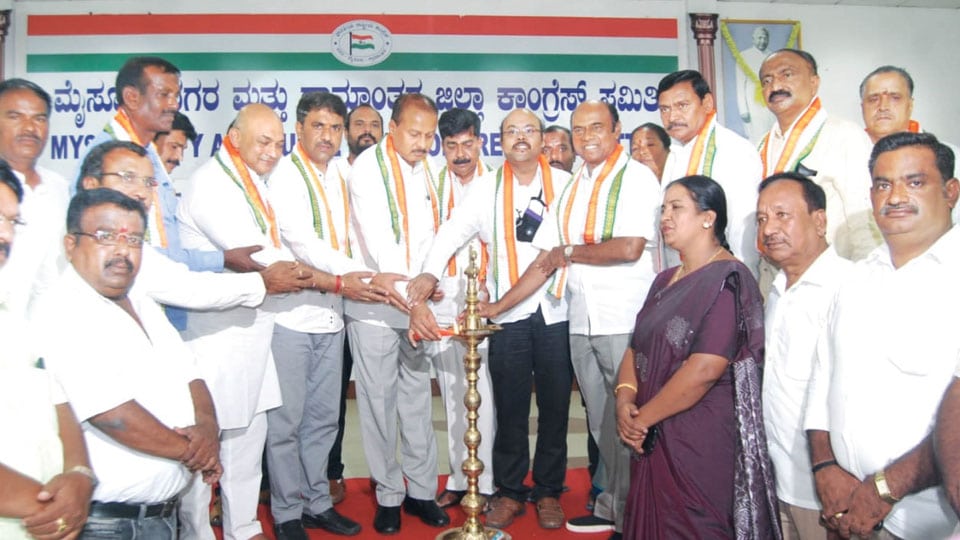 BJP’s communal politics will be rejected by people: Dhruvanarayan

Mysore/Mysuru: “Corruption by the State BJP Government has crossed all limits and so far three Ministers have resigned following various charges against them. The people will reject the communal politics of the BJP,” opined KPCC Working President R. Dhruvanarayan.

He was speaking at a campaign organised at Congress Bhavan near Railway Station on Wednesday, to seek votes for Congress candidate Madhu G.  Madegowda, who is contesting in the Legislative Council polls from the South Graduates Constituency. The election will be held on June 13. Addressing party workers from Varuna Assembly segment, he asked them to work towards the victory of Madhu G. Madegowda.

Charging the State Government with defaming great personalities like Basavanna, Kuvempu, Dr. Ambedkar and others, Dhruvanarayan accused the BJP of distorting history.

Varuna MLA Dr. Yathindra Siddharamaiah, who also addressed the party workers, opined that the Congress had not taken South Graduates Constituency seriously as it has taken now. “The KPCC President and CLP leader have selected a strong candidate in Madhu G. Madegowda, who runs a chain of educational institutions established by his father late G. Madegowda, for the Graduates Constituency this time. The Union and State BJP Governments’ misrule and corruption has angered the people and hope that the graduate voters will take a good decision when they vote on June 13,” he noted.

“Compared to previous elections, the response to the present election is very good as earlier polls from this Constituency were not taken seriously by the party workers. But Congress has a favourable atmosphere now. Party leaders and workers should bring voters to the booth and persuade them to vote for the Congress candidate,” said KPCC Spokesman H.A. Venkatesh.