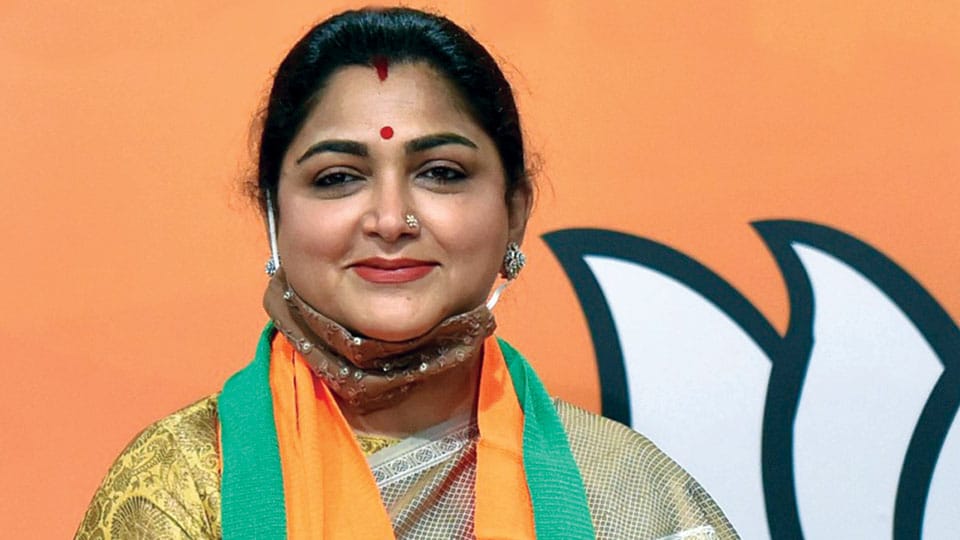 The thrill of changing colours

Kushboo has joined the BJP. So did Veerappan’s daughter Vidyarani some time ago. Giving the forest brigand the honour due to him, BJP made his daughter the State Vice-President of the party’s Youth Wing. Kushboo cannot expect the same high status as Veerappan’s family, but she is sure to be accommodated soon in a responsible position of leadership. Vidyarani will certainly help the fresh entrant to settle down to the colours she has adopted with the ease of a lizard.

Kushboo is no household name, so a quick introduction may be in order.  She is known as a filmstar in Tamil country.  More than 200 movies have not raised her to the status of Rekha or Suhasini or Revati. One reason could be that she is not what she appears to be. She is not a Tamil or even a South Indian. She is a Bombay Muslim, originally named Nakhat Khan. There is no problem with that. Whatever problem she has is on account of the fact that, unlike Rekha or Suhasini or Revati, she chose to become an active politician.  It’s a golden rule that, if you enter politics, you should be ready for brickbats.  Once you demand political positions, you should be ready for public scrutiny of everything about you.

So Kushboo’s political hop-step-and-jumping is legitimate subject for public examination. She definitely had an eye on political office. Her lizard-like aptitude for changing colours brings this out. She joined the DMK during Karunanidhi’s days when that party was in and out of power. Karunanidhi’s son and heir M.K. Stalin sidelined Kushboo whereupon she joined the Congress.  She didn’t get what she wanted in the Congress either.  Now, probably as a last resort, she has joined the BJP. What can BJP give her when it is not even an also-ran in Tamil Nadu politics? If she gets nothing from her newest party, what then?

Kushboo’s problem, apart from being a non-Tamil, is that she is known as “efficient, ambitious and arrogant.” Unfortunately, that is a combination of qualifications that does not attract followers while it detracts one’s value in the eyes of party bosses. Kushboo is in search of a party that adjusts to her personality and gives her what she wants. Who does she think she is, Jayalalithaa? It is astonishing that she thinks the BJP will give her what other parties could not. Given the BJP’s irrelevance in the thought processes of Tamil people, Kushboo is a loser.  If the BJP thinks it can gain a foothold in Tamil hearts through her, it too will be                                                         a loser.

This is where the foolishness of Kushboo’s move becomes obvious. It will not be wrong to say that Kushboo has bargained away whatever goodwill she had acquired in her adopted State.  In her home State, she would have been either ignored or pushed into the anonymity of a crowd.  As a “Tamilian” she gained a name and a habitation in Chennai. She should have studied how and why this unique experience came her way. But political ambitions led her astray. By joining a party that is genetically opposed to her religion and is seen as a polarising influence in the country, she has gained nothing and lost a good deal.

Ranjani, a filmland friend of Kushboo, was candid when she said that there should be no surprise if Kushboo joined the CPI-M tomorrow. “You criticised the Prime Minister and his party the other day,” she said. “Now you say only Modi can lead India.  Doesn’t this show you up as an opportunist?”

May be not, let’s hope.  May be Kushboo’s intentions are honourable and she wants to do the best for the country. Quite a few relatives of film personalities are in the BJP camp — some relatives of MGR, of Dhanush and of Ilayaraja. Of all human weaknesses, the eagerness to join a winning side is the most powerful.  In football and cricket you cannot do this, but in politics, you are a fool if you don’t. India has an honourable tradition in this area. Ever since the game of democracy began, the Aya Ram Gaya Ram culture has been an integral part of it. The smart ones always remained aya, the amateurs were forgotten as gaya.  Kushboo is the newest Aya Ram. She left the Congress, she said, because “I was not utilised.” Since the BJP is helpless in Tamil Nadu, how will it utilise her? Perhaps something in the Centre?  May be a Cabinet post?  Hope is eternal, ambition is boundless.