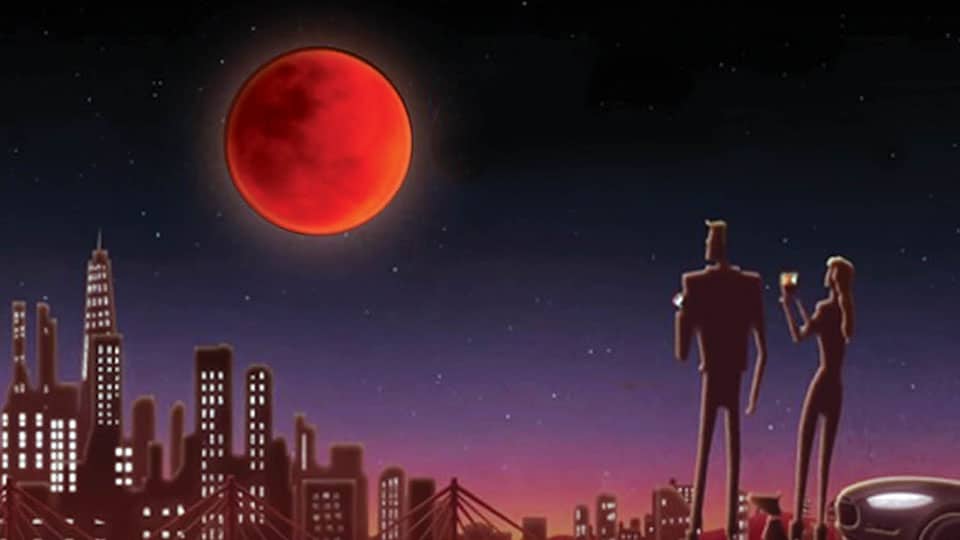 After the Americans landed on the moon, the moon lost its charm amongst the public, their affection moved towards Mars. But there are two groups of people who continue to obsess over the moon — Hindi film lyricists and astrologers. But last week everyone was acting like a Hindi lyricist with Chand on their lips and astrologers with Moon on their mind.

Everyone wanted to watch the moon because, as an excited friend of mine said “On Jan. 31 the moon will not be just a regular moon, it will first become a Super Moon, then a Blue Moon, and finally a Blood Moon, all in a few hours!”  I told him he seemed more excited than when he was leaving for his honeymoon 15 years ago.  To which he replied with a wink, “Well, that’s because after 15 years of marriage ‘honeymoon’ happens once in a blue moon.”  He had called to invite me to watch the spectacle at Sri Ramakrishna Vidyashala where they have two telescopes.

The excitement was all around. Even small children were caught up in the frenzy as a neighbour’s son informed me, “Uncle dad is taking me to see superman!” His dad corrected him “super moon kano, superman alla.”  The child didn’t seem excited anymore.

Some others wanted to show off their “Lunar” knowledge and used technical terms such as Umbra, Apogee and Perigee while speaking of the eclipse. By the way for the people who have forgotten, Umbra means shadow, Apogee is the farthest point moon is from earth and Perigee is the closest.

While all this moon-talk excited a few, it made others nervous. The Iron-man near my apartment asked me “Sir I heard moon was going to be very close to the earth. Are there are any chances of a bookampa (earthquake) or other such calamities?” I assured him it was safe and told him to look up at the moon in the evening. He said that’s not a good idea, as during grahana (eclipse) people tend to become “mental” so he would go to sleep early.

But do people really go mad? One can mock my Iron-man but the word Lunatic comes from the Latin word  “lunar” or “lunaticas”, meaning “moonstruck”.

Eclipses have amazed humans since time immemorial. Every religion and culture has its own interpretation or theory of what an eclipse means to our planet and us. If certain Christians believe in second coming, Muslims have specific prayers for the eclipse, Hindus have rituals that are strictly observed.

In many of my friends houses, Section 144 was declared — curfew. In some households there were dietary restrictions. Even temples were closed for the period of the eclipse.  Curfew was to reduce one’s exposure to danger lurking outside in the form of accidents and lunatics. Food restrictions were because supposedly if you eat during an eclipse it will play havoc with your digestive system.

I didn’t pay heed to this and stayed out to join my friend to watch the moon. I was asked to be at the Ramakrishna Vidyashala by 6 pm.  By the time I reached, a small crowd had already gathered. The moon was still not out. The staff of the Vidyashala had set up two telescopes on two platforms. They requested people to stand in line. They requested the public not to touch or move the telescope because once out of focus, getting the telescope back to focus on the moon would take time.  Every thing was set and we were only waiting for the groom, the moon to arrive.

Finally at around 7.15 the moon appeared. It looked more beautiful than it usually does but the pushing and shoving ruined the experience. The Vidyashala staff must have thought the members of the public would follow instructions and were as disciplined as their students and so had not deputed any volunteers. Soon the pushing and line jumping began. The telescope was moved out of focus a number of times, the line to see the moon became a cluster. I walked away.

It seemed like the lunar eclipse had a mild lunatic effect on the people there. What else can one assume when so-called cultured and educated people push women and children to grab a telescope? I was disappointed that I could not even get anywhere near a telescope.

The unique lunar eclipse was a wonderful opportunity for all people to become interested in the world above us. These days we are so immersed in the digital world — phones — that we have forgotten to look up at the sky with wonder.

It is unfortunate that many schools did not have any special programmes to mark this event. Even more disheartening for me was that while we the public pushed and shoved to see the moon at Ramakrishna Vidyashala, the students of the Vidyashala, who have the first right to the telescope, were cooped up in their classroom doing their home work. Books can wait, nature’s glory doesn’t.

We have forgotten the wonders of the world above us and its power to keep us grounded. We need to look up to know how insignificant we are down here, mere specks, foolishly wallowing in our own misguided sense of grandeur.

For now, I missed my chance to see the Super Moon through a telescope. Hopefully, I will be able to see it next year. Yes, there is another “Blood Moon” eclipse coming on Jan. 21, 2019.

P.S.:  Many were heard saying the last time there was a Super Moon was 152 years ago. But this was for the Americas, not for rest of the world. In Asia, the last Blue Moon and Total Lunar Eclipse happened on December 30, 1982, just 35 years ago.