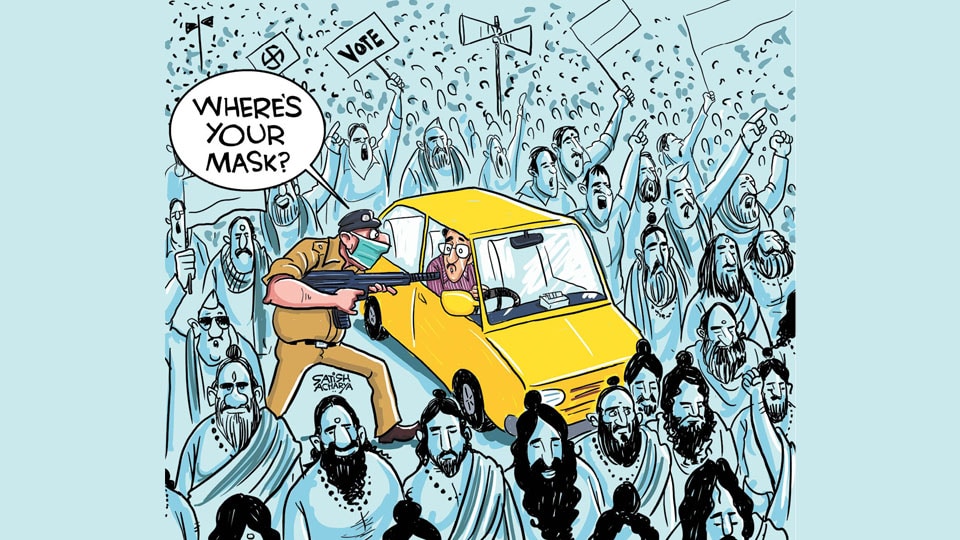 Religion Vs Virus, who’ll win? We will know soon as the Kumbh Mela, one of the largest religious gathering in the world, is underway.

It is shocking that the Government has given permission for the Kumbh Mela at a time when Covid cases are rising exponentially, Oxygen supplies are running low and Remdesivir, the crucial drug in the fight against Covid, is unavailable.

By the way, remember Tablighi Jamaat? In 2020, there was such outrage that it was made to seem like the gathering of about 2,000 Tablighi Jamaat members would “super-spread” Coronavirus and annihilate the entire Indian subcontinent. But, now when the Government allows the largest religious gathering on the planet, there is… Shhhhhhh! Silence.

Worse, back then even the World Health Organisation (WHO) did not know how dangerous Coronavirus was, but now we do and yet 30,00,000 people were allowed to congregate by the banks of river Ganga!

Meanwhile, the Tablighi Jamaat day before yesterday, on Thursday, finally got a judgement from the Delhi High Court granting it permission that allows 50 people to offer Namaz five times a day at Nizamuddin Markaz                       during Ramzan!

That said we cannot ignore the fact that today religion, in the form of pilgrimage, translates to tourism and affects the economy of a city. Which is why, instead of discouraging people from visiting Kumbh Mela, the Uttarakhand Government encouraged it.

The Uttarakhand State Government, which hosts the event in the holy city of Haridwar, promoted the event with advertisements in magazines and newspapers. I was reading The Week magazine dated March 14, when I chanced upon a four-page advertisement promoting Kumbh Mela.

The advertisement boldly reminded the reader, “Haridwar is primmed up for arguably the world’s most ancient and largest gathering of spirituality…” While the State’s CM, Trivendra Singh Rawat added, “I recommend people to come by road and drive hassle- free through our newly-built flyovers and bridges.” At the end of the fourth page, the advertisement ended with, “Devotees to be allowed at the Kumbh Mela only after producing negative RT-PCR report, issued no later than 72 hrs.” Wah!

Does the Uttarakhand Government think that tired and restless Sadhus, who have lived their lives as wandering monks, will voluntarily get an RT-PCR test and then wait for 72 hours for the result? Even if they do, does the administration think a Sadhu, who has waited for 12 years for this glorious moment, will simply walk away without a holy bath in the Ganga just because it produced a piece of paper that says positive? Laughable to say the least.

Our Governments do not think very deep before shutting down businesses and livelihoods. Our Governments penalises a citizen who does not wear a mask in his own car…. but somehow it cannot shut down a guaranteed “hyper-spreader” event?

Politicians and religions have taken over our minds, but just when we feel common sense has ceased to exist, we hear that this time the crowd at Kumbh Mela  was 50% less. This shows there are people who are thinking about their health and not blindly attending holy events and jumping into holy waters.

As I type this article, news is coming in that our Prime Minister has requested the heads of various Akharas, sects, to keep this year’s Kumbh a ‘symbolic’ event. But what does this mean? Does it mean the Kumbh Mela is going to be stopped?

Indeed, cajoling a group of people to do the right thing for the greater good is a better way to handle a situation in a democracy, but there is a line to be drawn. Should a Government keep waiting to get approvals from a group of Akharas when life of other Indians is on the line?

The Trinamool Congress had no problem when Didi wheeled herself into crowded election rallies swinging her plastered foot. But now when some polls indicate that BJP may win, her party colleagues say stop the election due to covid.

Our Prime Minister in his inimitable style canvassed in West Bengal saying  ‘Didi-O-Didi’   to packed venues but then when it’s time for Mann Ki Baat, he reminds us to maintain ‘Do Gaj Ki Doori, Mask Hai Jaruri!’

This dilly dallying by the Government and callous citizens reminds us of our State’s Health Minister, who last year during the peak of Corona said, “Only God can save us, awareness among the people is the only way.”

What he meant was, how can a Government protect its people if the people don’t want to protect themselves? After all, the Government did not force people to attend Kumbh Mela or the election rallies.

For now, we are glad the PM has suggested Kumbh Mela be a “symbolic” event, which we hope means Kumbh Mela stops. And let’s hope it is not a case of ‘too little too late’ and Haridwar, a city whose name literally means “Door leading to the Gods,” does not end up becoming our door to covid hell.