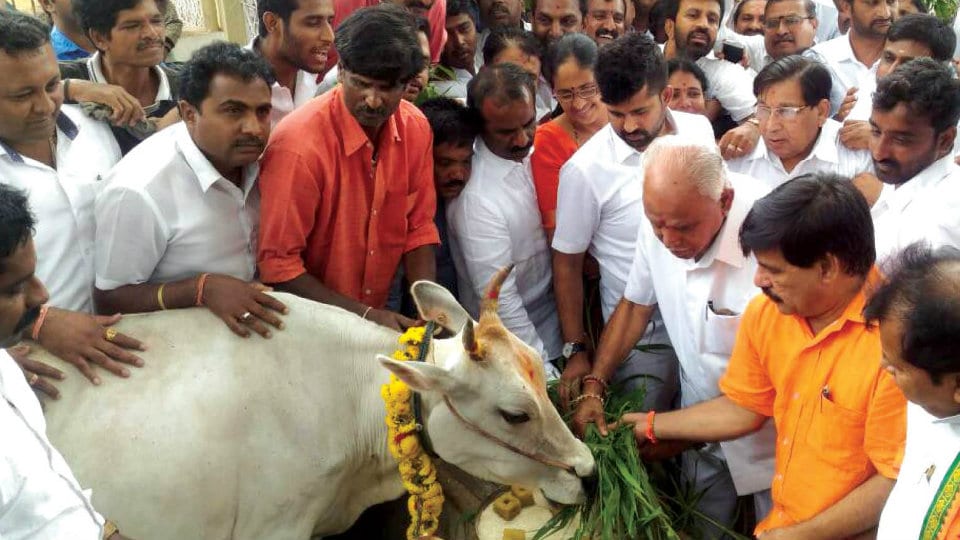 Mysuru: State BJP President and former Chief Minister B.S. Yeddyurappa said that he will hold a three-day satyagraha in Bengaluru from July 7 to 9 to urge the Government to waive off farmers’ loan in Co-operative Banks.

Speaking to the media after performing puja to cattle at Pinjrapole at the foot of Chamundi Hill yesterday, Yeddyurappa, who is on a State-wide tour as part of the party’s Janasamparka Abhiyana,’ said that he will hold the 3-day satyagraha to demand waiver of farm loans in Co-operative Banks. On the fourth-day, a Convention will be held where nearly 3 to 4 lakh farmers from across the State are expected to attend. However, the protest will be withdrawn if the Government announces loan waiver, he added.

Pointing out that he will visit two constituencies in each district after completing his State-wide tour by the end of June, Yeddyurappa said that he will continue to hold public meetings till August end.

Maintaining that the State’s ‘Anna Bhagya’ scheme is a Central Government initiative for which CM Siddharamaiah is taking credit, Yeddyurappa said that he has directed his party workers to visit Fair Price Shops in the State and erect photos of PM Narendra Modi and MPs and to explain the public that the lion’s share for the programme is funded by the Central Government.

Accusing the Congress Government of indulging in rampant corruption, Yeddyurappa alleged that Bengaluru had become a ‘Goonda’ city with crime rate increasing alarmingly.

B.S. Yeddyurappa bjp
‘BJP will get majority in next elections’
Creating beneficial spaces