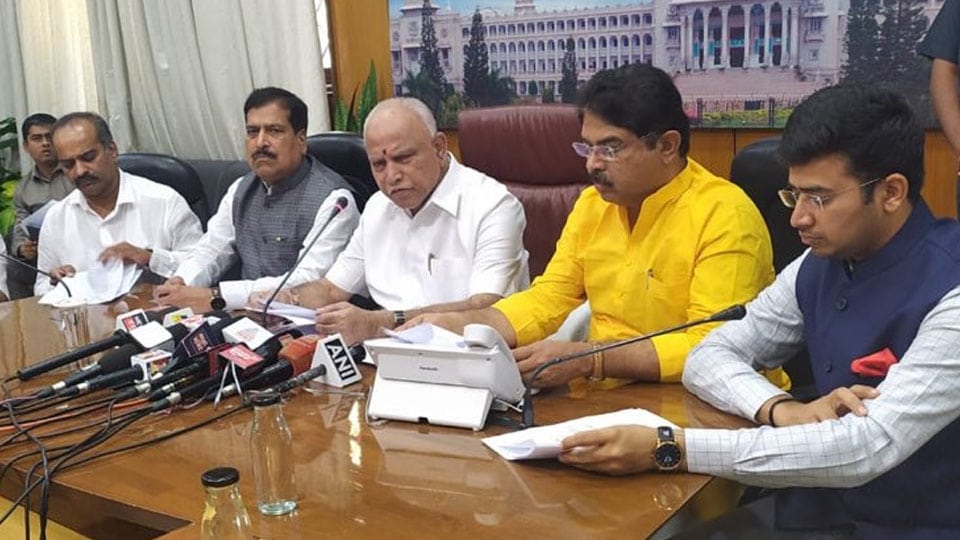 Bengaluru: Karnataka Chief Minister B.S. Yediyurappa said that the Cabinet expansion would take place on Feb. 6, with 13 MLAs taking oath of office. He was addressing a press conference at his Home Office this morning.

“The Cabinet expansion will take place on Feb. 6 with the oath-taking ceremony at the Raj Bhavan at 10.30 am. Thirteen MLAs, including 10 who had joined BJP from parties, including Congress and the JD(S), will take oath,” he said.

The Cabinet expansion is on the cards for nearly two months ever since the BJP won the maximum number of seats in the Dec. 5, 2019, by-polls and got a majority in the Karnataka Assembly. Yediyurappa has been under immense pressure by former MLAs of the Congress and the JD(S) who had crossed over to the BJP to make him the Chief Minister last July to expand his Cabinet. Of the 17 defectors, only 13 were fielded in the December by-polls and 11 of them won, making his job difficult. Two seats are still vacant because of election petitions pending before Courts.

According to these MLAs, Yediyurappa had promised to make all of them Ministers, with the post of Deputy Chief Minister going to their leader Ramesh Jarkiholi. But the party High Command had been dragging its feet, not allowing Yediyurappa to induct these new entrants at the cost of party loyalists.

In the 224-member Karnataka Assembly, only 34 can become Ministers, including the Chief Minister. The BSY Government currently has just 18 Ministers, with many holding more than one bigger portfolio.

Yesterday, Yediyurappa started consultations to finalise the list of MLAs to be inducted into his six-month-old Cabinet.

According to sources, Yediyurappa spoke over the phone to some newly elected MLAs and tried to persuade a few not to get agitated if they are left out of the Cabinet and assured them he would consider them in the next expansion after June.

The CM wants to keep Srimantha Patil, Mahesh Kumthalli and Shivaram Hebbar out of the Cabinet till June as the High Command is said to be in favour of a Cabinet reshuffle then. Efforts are being made to persuade K.R. Pet MLA K.C. Narayana Gowda to wait till June. But none are said to be ready to let go of this opportunity.

Former Minister Ramesh Jarkiholi, set to become a Minister, is reportedly batting for Kumthalli as he was with him from Day 1 when Jarkiholi started his efforts to topple the Congress-JD(S) Coalition Government owing to his differences with senior Congress leader D.K. Shivakumar.

Yediyurappa, given the green signal by the party High Command for Cabinet expansion after over six weeks, plans to induct 9 or 10 newly elected MLAs and three or four BJP old-timers. “Though Yediyurappa is keen on inducting all 11 turncoat MLAs to keep his promise, his hands are tied owing to increasing number of aspirants among BJP old-timers,” said a senior BJP MLA.