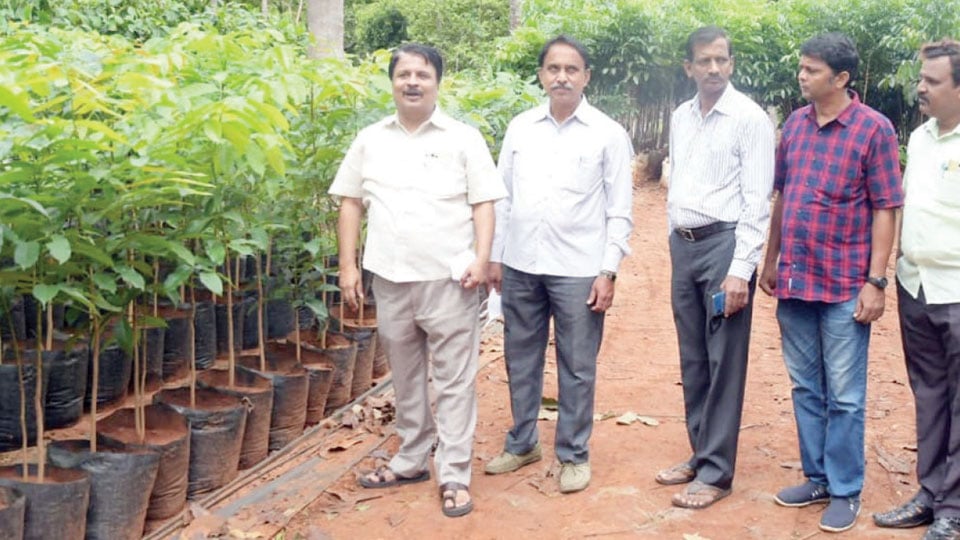 Campaign to plant one lakh saplings

Mysore/Mysuru: As part of the campaign to plant one lakh saplings, it has been decided to distribute 15,000 saplings from Hasiru Mysuru Farm, said District Co-operative Union President H.V. Rajeev.

Addressing a press meet at Hasiru Farm premises here on Wednesday, Rajeev said that in a bid to make Mysuru a ‘Green City,’ a meeting with environmentalists, naturalists, nature lovers and heads of various organisations chaired by Suttur Seer Sri Shivarathri Deshikendra Swamiji was held recently and following their suggestions the campaign to plant one lakh saplings was decided. Thousands of saplings were distributed last year and this year 15,000 saplings would be distributed, he added.

Continuing, Rajeev said that it was the responsibility of everyone to give a clean environment to future generations for which every individual should take the responsibility of conserving and protecting nature and added that a lot of trees were being felled in recent days for various reasons which may lead to imbalance of environment. Hence, with the co-operation of various organisations, planting and nurturing of one lakh saplings would be taken up in phases. To publicise the campaign, Mysuru District Journalists Association (MDJA) has joined hands with Hasiru Mysuru Farm, Rajeev said.

Sri Dharmasthala Rural Development Institute and Patanjali organisations would help those who have taken the responsibility of nurturing saplings for three years, he said and added that he had grown thousands of saplings in Hasiru Mysuru Farm on Nanjangud Road by spending money from his pocket. The saplings would be distributed to various organisations and Government Departments to plant and nurture them.

Saplings would be given free to anyone who takes up the responsibility of planting and nurturing the sapling for three years, Rajeev said and added that a few educational institutions and Government Departments were ready to receive the saplings to be planted in their premises to celebrate Vanamahotsava. In the backdrop of World Environment Day celebration on June 5, saplings would be distributed from today.

Rajeev said that former Mayor B.L. Bhyrappa had planted and nurtured more than 5,000 saplings across J.P. Nagar which has resulted in clean and good environment. This year saplings of 15 species including jackfruit, banyan, neem, honge and peepal have been grown. Former Mayor Bhyrappa, APMC and MUDA have requested for 1,000 saplings each and the distribution process has begun, Rajeev said.

DLSA to celebrate Environment Day tomorrow: District Legal Services Authority (DLSA) will be celebrating World Environment Day by planting saplings in the premises of Malalavadi Court at 9.30 am tomorrow (June 5).

DLSA Member-Secretary B.P. Devamane said that the programme will be inaugurated by Principal District and Sessions Judge Ramachandra D. Huddara.