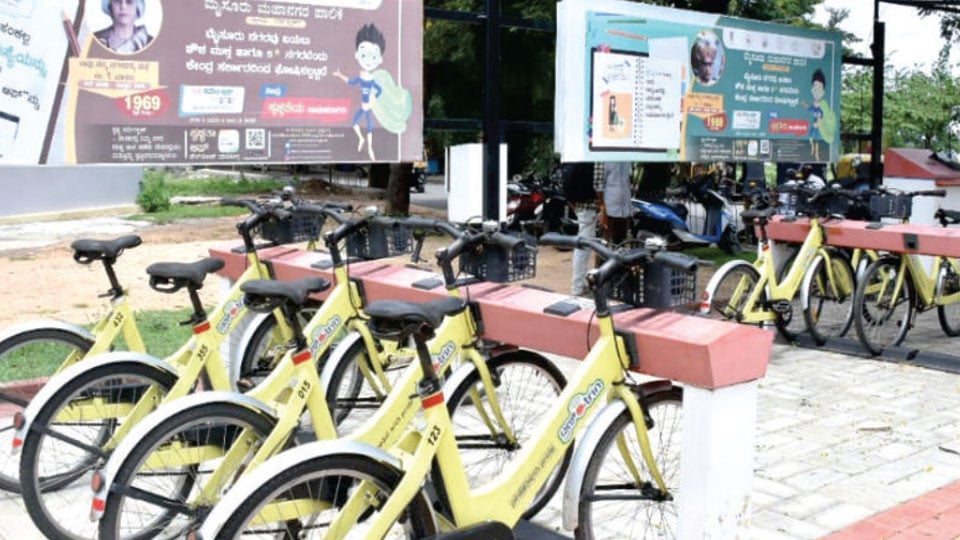 Mysore/Mysuru: ‘Trin Trin,’ the Public Bicycle Sharing (PBS) system, is completing three years today (June 4). The services were withdrawn for the past two-and-a-half-months due to lockdown and has resumed from June 1.

Following the Central Government’s order for lockdown relaxation, the District Administration has given nod to resume the Trin Trin services with 450 bicycles including 30 gear bicycles at 52 docking stations.

Though the services resumed from Monday last with DC Abhiram G. Sankar’s permission, it will take some time to be used to the fullest by the public.

‘Trin Trin’ was launched on June 4, 2017 by the then Chief Minister Siddharamaiah. Prior to lockdown, every day 1,200 people were utilising the service with more than 40% students depending on this service. Also, tourists were attracted towards this PBS system.

The system was established by Mysuru City Corporation (MCC) in association with the Directorate of Urban Land Transport (DULT). City-based ‘Green Wheel Ride’ has got the tender of managing the PBS system.

Speaking to ‘Star of Mysore,’ Manager of Green Wheel Ride, which operates PBS, Asha Kerakatti said: “Trin Trin services, which were stopped following lockdown, has resumed from June 1. Due to lockdown there will be no celebration of completing three years on June 4. In Mysuru, there are 14,000 members registered under this system. There are six specially designed vehicles to transport the bicyles to docking stations; out of them, five vehicles have been damaged due to recent rains and wind. Due to lockdown, they could not be repaired. Now, the repairing work has been taken up. With the remaining one vehicle, we have hired some other vehicles to resume the services. It will require at least a week for the services to spring back to normalcy.”