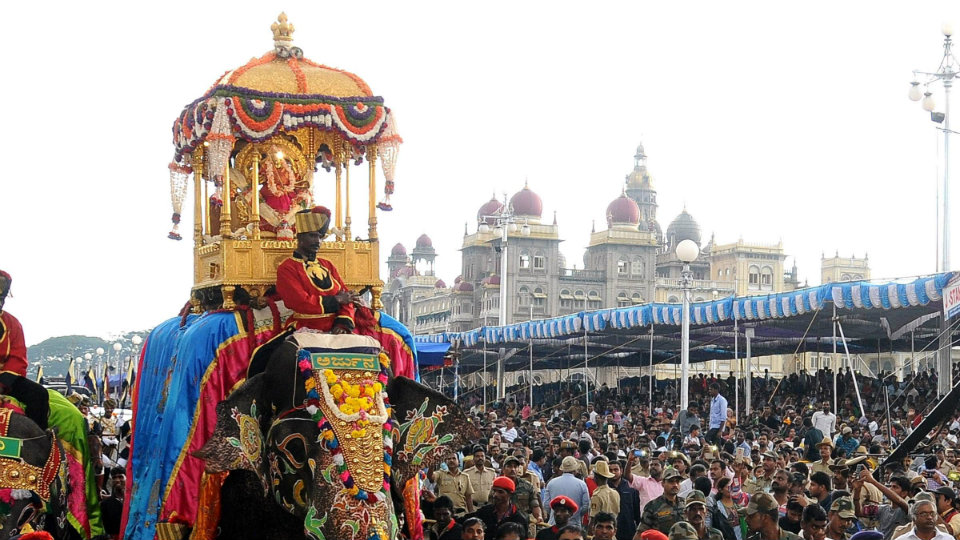 The Hindu month of Ashada is coming to an end, marking the beginning of festival season which starts from Bheemana Amavasya (July 23) ends with Balipadyami (Oct. 20). This is the time when people get a chance to get together and celebrate festivals with their loved ones. The festival season is also when people get to buy new things to their houses as there are tempting offers at almost every business outlet. This Weekend Star Supplement gives our readers information on some of the major festivals that fall between July and December.

Come July 24, the Hindu festival season begins with the commencement of Shravana masa, the fifth month in Hindu calendar, and runs on to Bhadrapada masa and Karthika masa, the following months.

The festival season starts with Bheemana Amavasya (July 23) during which Hindu married women offer pujas praying for their husbands’ long life while the unmarried girls offer puja praying for a good bridegroom.

Many Hindu families, especially those who worship Lord Venkateshwara as their family deity, send their children (boys) to individual houses asking for ‘Padi’, begging alms every Saturday (Shravana Shanivara) which is collected for entire month and later used in preparation of sweet to be distributed among the family members. The boys are seen going around places chanting ‘Venkateshaya Mangalam’ with a bowl or a bag in which they collect rice and money. 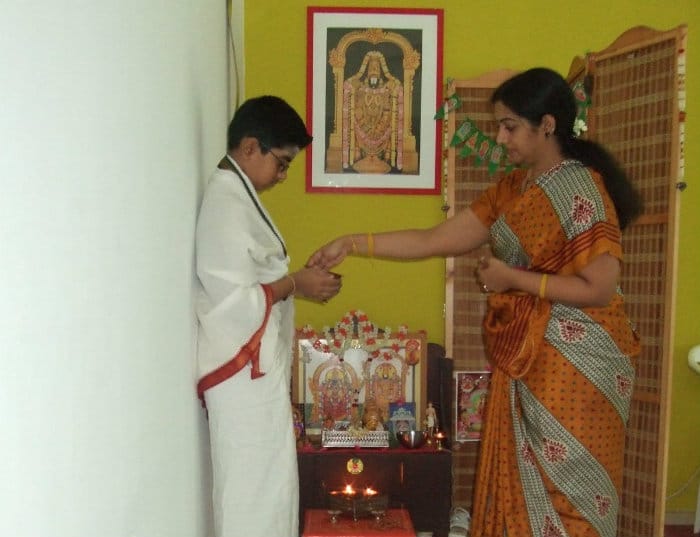 According to legends, the system of going around houses during shravana was started by people following Dasa custom. The collected rice was used in preparation of food and later distributed among the community members and others. Later, the ritual was adopted by all those who have Lord Venkateshwara as their family deity.

Shravana Masa is also the month which reunites the newly married couples. The husband visits his in-laws place to bring back his wife after living separately for a month. The bride is sent back to her home for a month in the first year of the marriage as it is believed that it is inauspicious for mother-in-law and daughter-in-law to live in the same house during Ashada. Like the song ‘Shravana Masa Bandaga Ananda Tandaga’ sung by Dr. Rajkumar it is forever happiness for the newly weds thereafter!

It is also the month when Hindu women observe ‘Mangala Gowri’ vratham praying for well being of their families. This vratham culminates with ‘Swarna Gowri’ vratham which is held in the following month of Bhadrapada, a day before the Ganesha festival.

Following this festival is ‘Nagara Panchami’ (July 28) during which snake god is worshipped and it is also the day when women invite their brothers home and sprinkle ‘abhisheka’ milk on the upper part of their back and also offer kum kum. This is to thank them for standing by them in support. 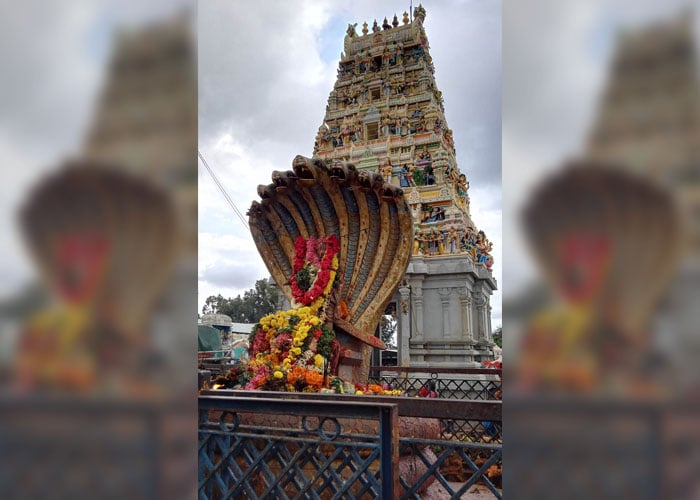 Next comes the Varamaha Lakshmi Vratham (Aug. 4) which is celebrated with great reverence. It is performed by married woman for the well being of their family members, especially husband, to get progeny etc. It is believed that worshipping Goddess Varalakshmi on this day is equivalent to worshipping Ashtalaksmi – the eight goddesses of Wealth, Earth, Learning, Love, Fame, Peace, Pleasure, and Strength. Just after three days after Varamahalakshmi comes Sri Krishna Janmastami (Aug. 14), the birthday of Lord Krishna. The festival is of great significance in Udupi where the special pujas are offered to the deity. It is also celebrated with great devotion by Sri Vaishnavites and all temples where Lord Vishnu is worshipped. Large number of devotees visit the temples at Mathura (birth place of Lord Krishna) and Brindhavan (where Lord Krishna lived) to offer special prayers. For every Hindu woman, the major festival is the Swarna Gowri Vartham or Gowri Festival (Aug. 24).  The idol of the goddess made of clay is brought home along with the idol of Lord Ganesha the previous day at an auspicious time. While, the men get the idols amidst ringing of the ritual bell the women welcome both Goddess Gowri and Lord Ganesha by offering aarthi at the entrance of their house.

Next day the idol is kept on a plantain leaf with rice grains and is decorated with various fancy items before offering the puja. Some also use silver idol or make triangular shaped object using turmeric which is considered to be Goddess Gowri and offered puja. Women prepare delicious food like obbattu, kosambari, payasam, chitranna, special rasam, paiya and others which are served to everyone at home and to those who are invited for lunch. 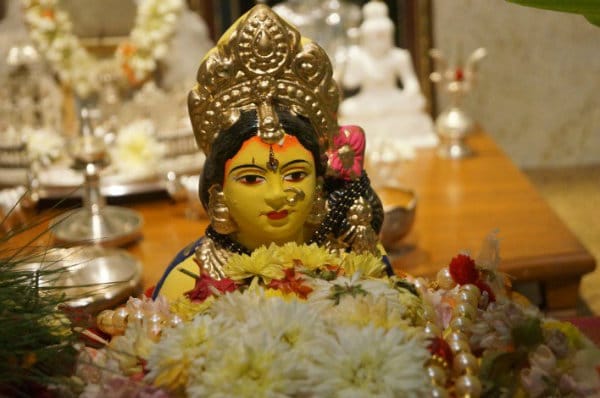 Married women observe this vratham praying for longevity of their husbands, wealth and prosperity. Young girls also observe this festival for getting good husbands. Goddess Gowri is worshipped for courage and power. It is believed that Goddess Parvathi descends on earth on this day to answer the prayers of married and unmarried women.

Following day is the Badhrapada Skula Chaturthi (Aug 25) when Lord Ganesha is offered special pujas on the occasion of Ganesha Chaturthi or Vinayaka Chaturthi. The ten-day festival begins with the installation of Ganesha idols privately in homes or publicly on elaborate pandals (temporary stage). Observations include chanting of vedic hymns and Hindu texts such as Ganapati Upanishad, prayers and vratha (fasting). Offerings and prasadam from the daily prayers is distributed to the community. Women prepare ‘modaka’ which is believed to be a favourite delicacy of Lord Ganesha. At the end of 10th day, the idol is taken on a grand procession before being immersed. 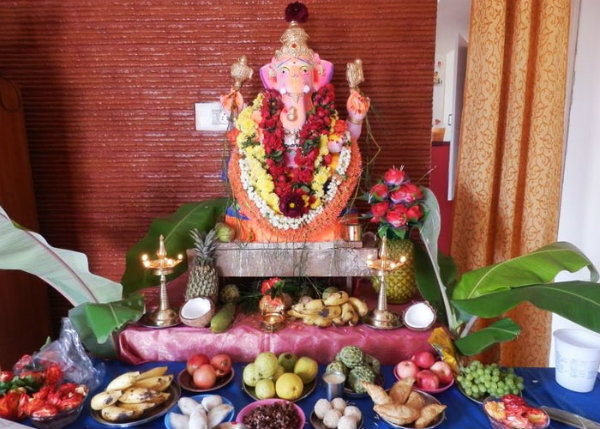 This year Navaratri or Dasara will be celebrated in the month of September. Prior to the commencement of Navaratri from Sept. 21 there are three more festivals, though minor, which are also of great significance.

On Sept. 4, Brahmins, who follow Rig Veda celebrate Upakarma while the Yajur Veda followers celebrate it on Sept.6. Upakarma is held once a year during the shravana or dhanistha nakshatra in Shravana masa. It is the day when Brahmins ritually change their upanayana thread (sacred thread) amidst chanting of religious hymns. 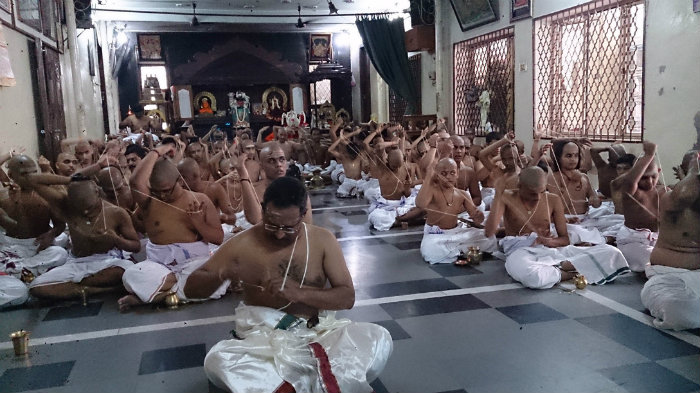 Between Sept. 4 and Sept. 6 is the Ananthapadmanabha Vratham on Sept. 5. It is a special puja to Lord Vishnu observed on Anantha Chaturdashi day. It is performed on the fourteenth day of Shukla Paksha of Bhadrapada month. This year the Navaratri, which begins on Sept. 21 culminates on Sept. 30. The festivities which begin with women displaying dolls on the first day ends on the day of Vijayadashami, the most auspicious day when Dasara Elephants are taken in a procession from Mysore Palace premises to Bannimantap Grounds.

READ ALSO  A master who excelled in shuttle badminton

According to a legend, Vijayadashami denotes the victory of good over evil and was the day when the Goddess Chamundeshwari (Durga) killed the demon Mahishasura. Every day women prepare sweets (bombe bagina) to be distributed among the kids who visits houses to see the dolls on display.

The seventh day of the Dasara is the Saraswati Puja  (Sept.27) during which special pujas are offered to Goddess Saraswathi, the goddess of knowledge and wisdom. People keep books and writing materials in front of the deity’s portrait and offer special puja. 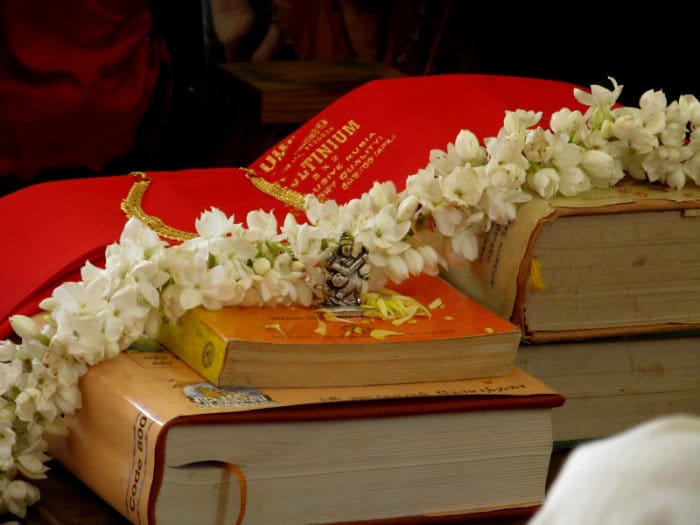 The next day is celebrated as Durga Ashtami or Maha Ashtami (Sept. 28) during which special pujas are offered to Goddess Durga (Parvathi). The penultimate day of Dasara is the Ayudha Puja or Maha Navami (Sept. 29), when Hindus offer special pujas to the weapons and their vehicles. Dasara festival ends with Vijaya Dashami (Sept. 30). It is believed that it was on this day that Rama killed Ravana and thus the day is celebrated as victory of good over evil. In Mysuru, it is the day when caparisoned elephants go on a procession from Mysore Palace to Bannimantap Ground. One of the elephants also carries the 700 kg Golden Howdah installed with idol of Goddess Chamundeshwari. Tourists from all over the world come to Mysuru to witness the grand celebrations and the procession. It is followed by the torchlight parade at the Bannimantap ground in the evening which is a visual treat to watch as well. 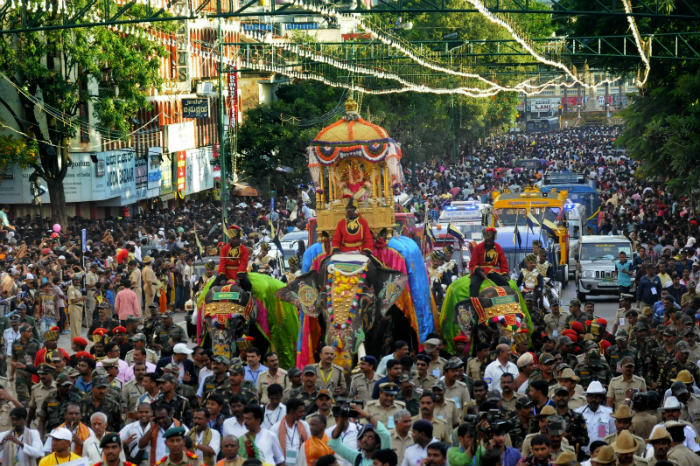 The festival season ends with celebrations of Deepavali on Oct.18 and Oct.20. The first day (Oct. 18) is the Naraka Chaturdasi. It is believed that Goddess Kali killed the demon Narakasura while some also say it was Lord Krishna. People take oil baths, have sumptuous food and burst crackers to celebrate the death of the demon. 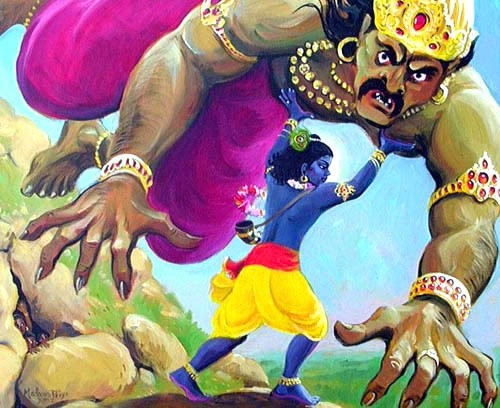 Balipadyami (Oct. 20) is celebrated in honour of the notional return of the King Bali to earth. 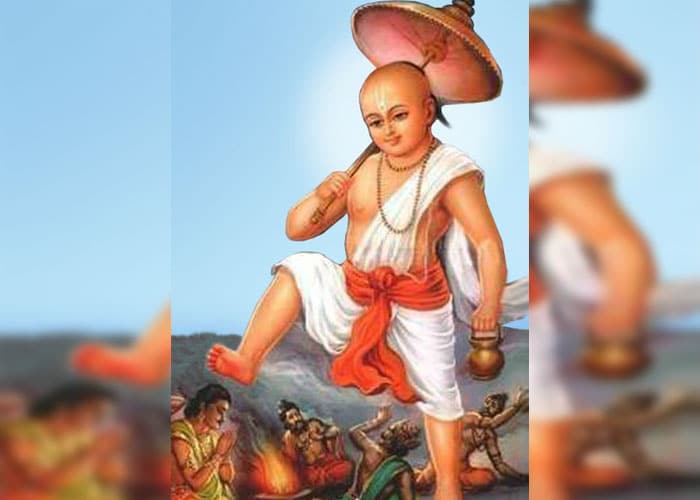 People offer Balindra Puja to welcome the King to their houses. Lord Vishnu had given him a boon to return on the earth on this day to see how people led their lives. The next major festival for Hindus is Sankranti which falls on Jan. 14, 2018 followed by the Ugadi in the month of March, 2018.