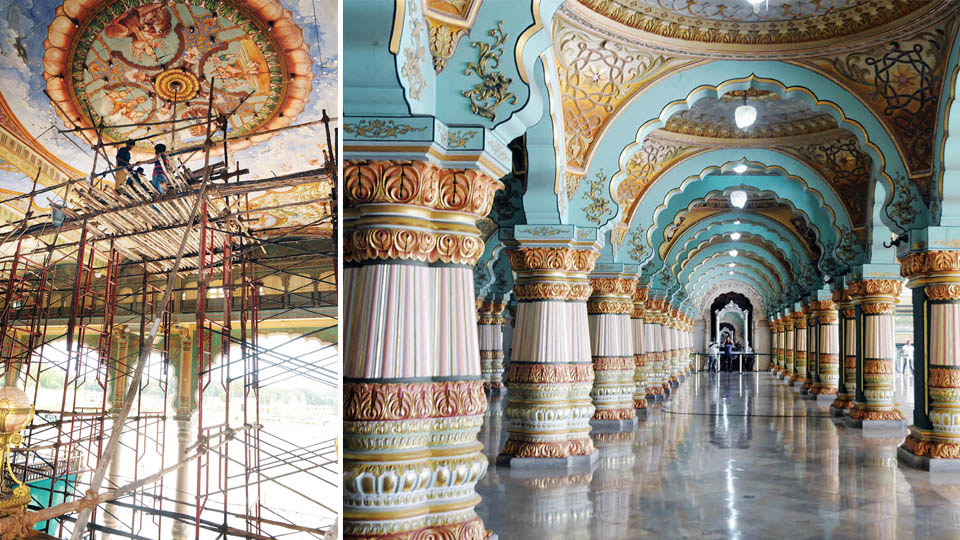 Makeovers, restorations and beautification are happening in Mysuru and it’s all in preparation for one event: Dasara. And the Mysuru City Corporation is desperately trying to make the city look beautiful by roping in artisans. It is a tight balancing act as the civic body has to face flak if something goes wrong or if the political bosses are unimpressed with the aesthetic works. While the official machinery has embarked on “Operation Beautification”, the Mysore Palace that is the royal attraction is being given a smooth shine for the 10-day jamboree. This Weekend Star Supplement gives a glimpse of the finer details of Dasara works, setting the mood for the fiesta.

City gets a makeover ahead of Dasara

With just 18 days left for ‘Naada Habba’ Dasara, the Mysuru City Corporation (MCC) has started beautifying the city. Mysuru, which has seen only small and medium development works since the completion of Dasara 2017 is seeing a major revamp now, especially in the Central Business District, and on a war footing to meet deadlines.

MCC has taken up works like relaying of roads, pothole filling, electrical work, painting, erecting and beautifying medians with ornamental and flowering plants, repairs of broken and caved-in footpaths and gardening. This year, the Dasara Executive Committee and the City Corporation have given prominence to beautify medians, painting kerb stone, footpath and painting of walls. 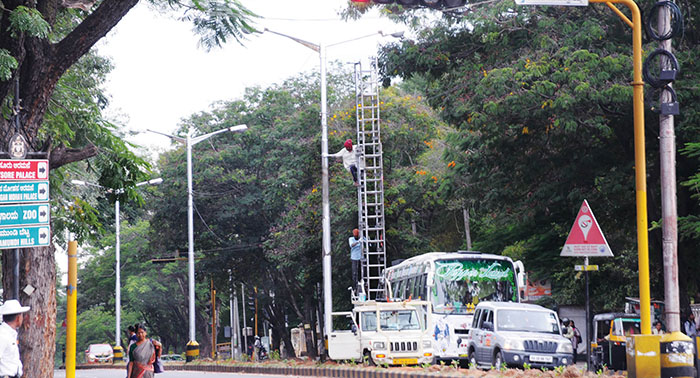 Along with beautification works, efforts are on to replace burnt bulbs on the main roads. Special teams are working on this project.

Kanagale and Bougainvillea for median gardening

As part of the greenery and beautification efforts, the MCC has given special thrust to median gardening and painting. It has taken up planting ‘Kanagale’ and ‘Bougainvillea’ plants which are known for their excellent flowering and ornamental looks for median gardening. They are being planted at important roads in and around Mysore Palace, Raja Marga, and other tourist-frequented roads. Bougainvillea is one of several desert plants that flower many times throughout the year. These desert shrubs require low care and relatively drought-resistant. They provide lovely flowers in various colours such as magenta, purple, pink and red.

The other plant is Kanagale, the botanical name of which is Neirium Oleander and belongs to family Apocynaceae. It is an evergreen shrub which grows 8 to 18 feet in height. The scented flowers bloom in clusters at the end of each branch. Not eaten by stray cattle

These ornamental and flowering plants are chosen for their ability to absorb dust and pollutants. They also add beauty to the landscape, clearly demarcate roads. Another advantage is that cattle do not eat the leaves as they are bitter. 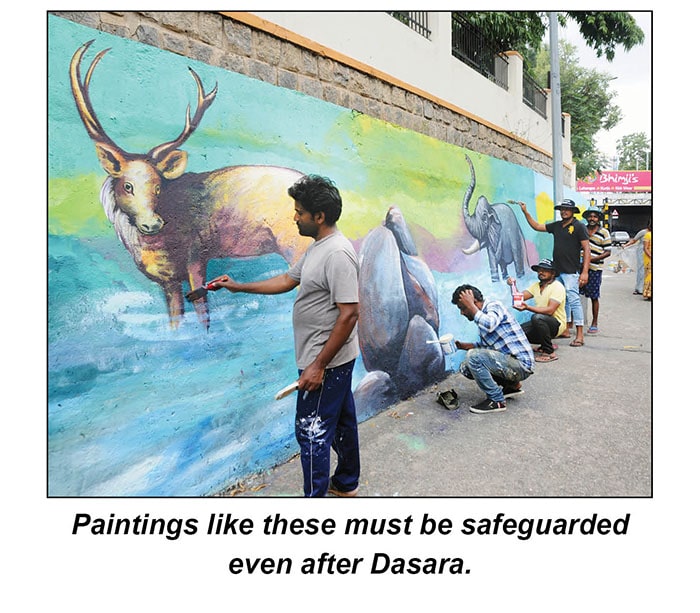 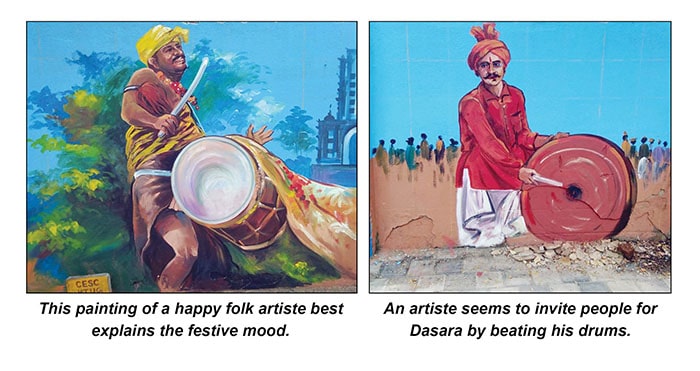 Political graffiti and posters that brought disrepute to the city are being removed and Warli Art is taking their place. Warli Art is a tribal art form which has its root in Warli, a hamlet in Thane, Maharashtra. This art form, considered niche, has history of 3,000 years.

Anil, a professional Warli artist said that this art form is described to be extremely rudimentary. The artists use a very basic graphic vocabulary such a circle, a triangle and a square to paint the walls. The circle and triangle come from their observation of nature, the circle representing the sun and the moon, the triangle derived from mountains and pointed trees, he said. MCC had painted many walls with murals depicting the culture and history of Karnataka last year but these Warli paintings are adding to the aesthetics. The paintings provide artistic relief amidst hustle and bustle of traffic. Artists give expression to their creativity with Warli Art. Many such structures are being painted in city.

“This is one of the best opportunities for artists like me to express besides earning some money at a time when rampant flex and banner culture have threatened our livelihood. Wall painting is one of the best medium to communicate”, said Anil, a professional painter who is involved in city wall painting. 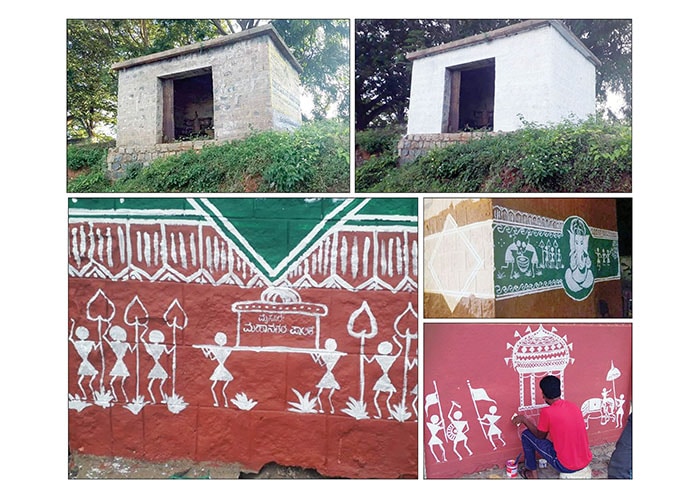 Anil said most of the artists who are undertaking painting works are professional artists from CAVA and other Fine Arts Colleges. The MCC has promised them Rs. 40 per square feet of painting and drawing as against their demand of Rs. 70 per square feet, he added.  As per the instructions of State Government, the MCC all set to complete the beautification works before the Dasara inauguration on Oct. 10.

The Dasara Executive Committee which is conducting the ‘Palace on Wheels’, a bus tour programme where tourists are taken on a visit to Palaces, has also planned to take tourists on a tour of paintings that gives information about the history of Dasara celebrations from an artist’s point of view. 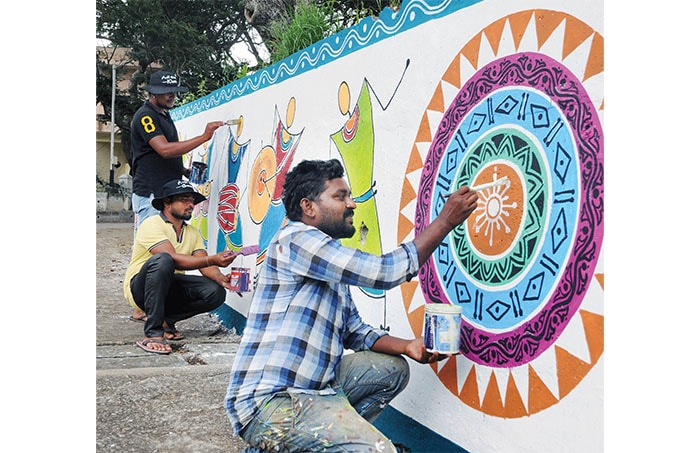 Works have been were awarded to 11 contractors for painting works. These painting contractors have deputed 50 to 70 workers for daily painting to meet deadlines. “Instructions have been given to them to paint yellow and black colours on kerb stones, footpaths and medians. Planting trees on widened road medians is a crucial part of our plans to increase green cover,” he said.

Cleaning ceilings to bring back sheen

The iconic Mysore Palace has a special place both in the hearts of Mysureans and tourists. That too, an illuminated Palace is a cynosure of all eyes. A host of rituals including the Private Durbar are held inside the Palace during Navarathri without even compromising on minute details. In view of the festivities fast approaching, workers on scafoldings are replacing old and burnt electricity bulbs with new ones apart from dusting the intricate ceilings and also cleaning the Durbar Hall. 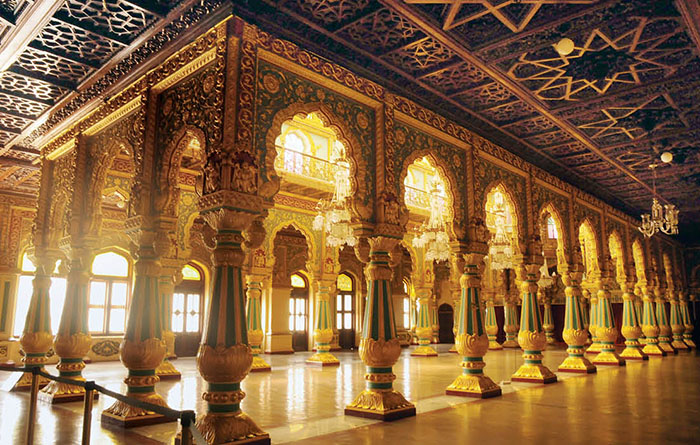 Transforming a mundane structure into a masterpiece

Here are some pictures of Warli Art and how it can transform an unattractive and mundane building to a vibrant art piece. Warli art form, considered niche, has history of 3,000 years. Here, artists use a very basic graphic vocabulary such a circle, a triangle and a square to paint the walls. The circle and triangle come from their observation of nature, the circle representing the sun and the moon, the triangle derived from mountains and pointed trees.

Mysuru City Corporation Commissioner K.H. Jagadeesha has said that a proposal of Rs. 27 crore has been sent to the State Government for overall beautification works as this year’s Dasara project.

Speaking to Star of Mysore, he said last year too, the MCC had sought Rs. 25 crore for works but the government released only Rs. 10 crore. “This year, we have asked sponsors and other private players to fund for paintings, planting median saplings and the intention behind seeking sponsorship is to make private players a part of the development,” he said.

The MCC has also sought the support of District and Mysuru Hotel Owners Association and others to sponsor certain works. “Sponsors like Mahalakshmi Sweets, Bhima Jewellers, Brigade Group and others have already donated funds for painting and other beautification works. Surfa Coats India has fully supplied paints, brushes and other painting and drawing accessories. Some other companies have come voluntarily to supply ornamental and flowering plants,” he said.

The main idea behind painting walls is to stop people from urinating against walls. The Civic Body is also hiring additional Pourakarmikas and other required staff to take up cleaning work round-the-clock. Measures have been taken to set up mobile toilet facilities besides focusing on health and sanitation measures, he said.