Home » Feature Articles » Since generations, they are lured by the shine 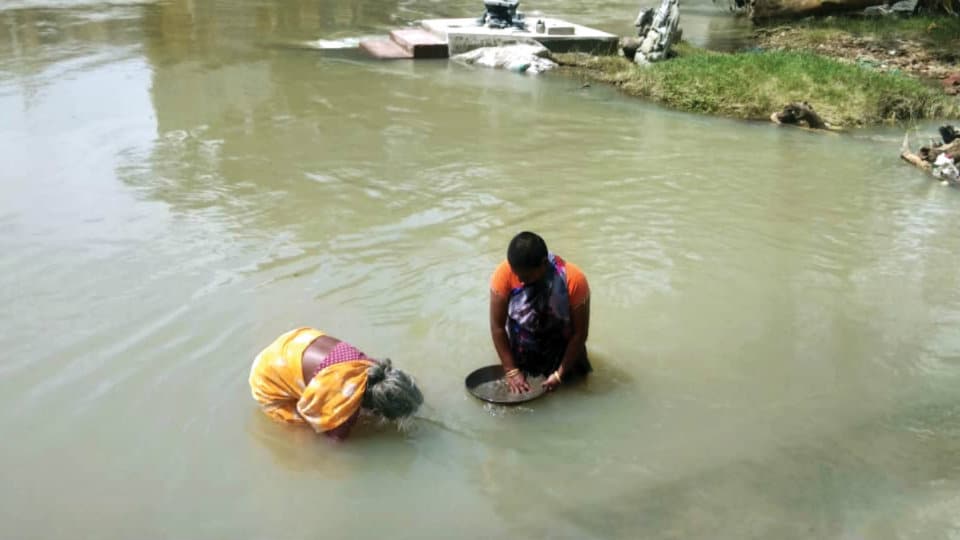 Since generations, they are lured by the shine

There is another group of coin-and-treasure hunters at Paschimavahini in Srirangapatna. The speciality of this group is that they go in search of places where people come to immerse the ashes of their loved ones and perform ‘Pitru Paksha’ rituals every year at the designated auspicious season.

This group too hails from Andhra Pradesh and their native is Kurnool. They have put up shacks and tents near the Srirangapatna Railway Station and they come to Paschimavahini every day. Once they finished searching the river bed, they go to other places.

“We will be in one place for 30 days. And will not come to this place for the next two to three years. We lead a nomadic life and we go to places far and wide in search of treasures,” said their team leader Lakshmi, who is 85.

Lakshmi comes here with her daughter and family in search for coins, gold and silver. “Rich people or people who have a strong belief in after-life and previous lives part with valuables of their loved ones while immersing their ashes. We have got bracelets, nose studs, rings and, of course, coins during our search,” says Lakshmi.

Lakshmi has been in the profession since childhood and has learnt the tricks of the trade from her elders. Her family has even fished out British-era coins and valuables that sell now for a fortune. But these people sell valuables to local pawn-brokers for a small sum. If they have the resources, they melt the metal to form ingots. However, they are very secretive about what they do with the treasures. Ask them, they will just smile and carry on with their routine.

They are not the only ones in the job. There are several groups that hunt for gold and coins here. And places like Karighatta too have such treasure hunters. All of them venture into the river when the water level is low where they can see and spot sparkling valuables in clear water. And they are out of job when the river is in full spate. That’s when they share the booty among themselves.

Another woman in the group tells a story of her son who drowned in shallow water 12 years ago. “He was well-built and could swim a big lake in one go. He drowned in knee-deep water and it was shocking for us. He immersed the upper part of his body into water near a rock in search of valuables and he could not rise up as some ‘spirit’ on the rock held his head tight under water. How can we believe that such a good swimmer drowns in shallow water,” she asks, again justifying her ‘spirit’ theory.

Her family members too support her views and say they never venture into the water alone. “We always do this in groups for safety purposes,” they sign off.

Why do people drop coins into rivers ?

Dropping or throwing coins into rivers has been a religious practice in India from thousands of years. Although it was started by ancient Indians and is still being followed, a lot of people don’t know its real purpose. Over time, people came up with new reasons, ideas and stories around this practice.

“Dropping coins in the river will help you wash out your sins or throwing coins in river brings good luck or leaving something valuable in the rivers can make your wishes granted.”

But here is a scientific reason. In the ancient days, currency coins were made of copper. Copper is a vital metal which is very useful to human body. Water stored in copper containers is good for health. Ayurvedic scripts too mention that storing water in copper and silver pots purifies water and keeps body healthy.

Copper is antimicrobial and kills infection-causing bacteria within two hours of exposure. Many restaurants use copper glasses for customers to drink water.

So why Indians throw coins into rivers?

So, why copper is no longer used? For some generations, dropping copper coins worked exceptionally well. But in these modern times, we don’t use copper coins. Our currency is made of paper, stainless steel and aluminium. And recently everything went digital.