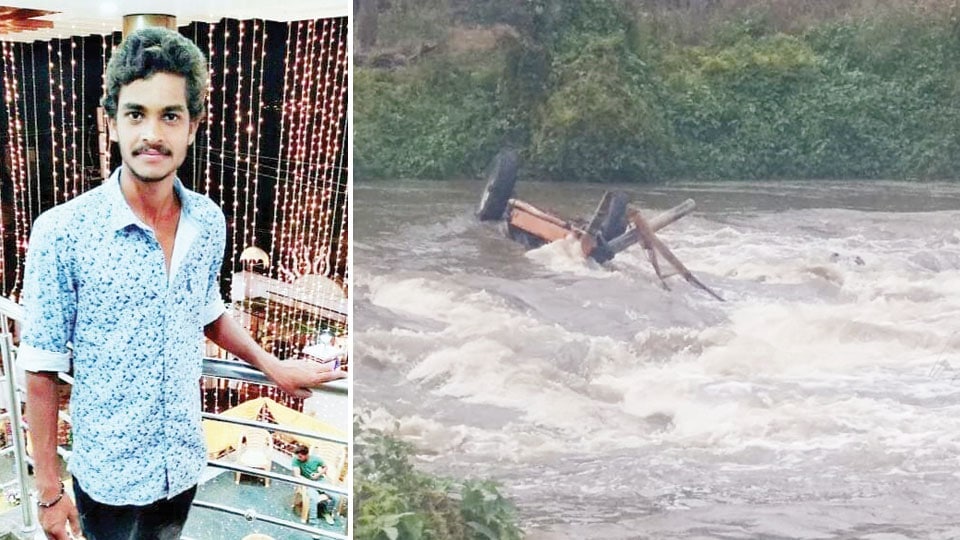 Youth swept away while washing bullock cart at Lokapavani River

Srirangapatna: A 21-year-youth was swept away while washing his bullocks and cart at Lokapavani River at Baburayanakoppal in Srirangapatna taluk yesterday.  Another youth, who was with him, swam towards safety.

The youth, who was swept away, is Somashekar, son of lawyer Sheshadri and Hema couple. While the youth, who swam for safety is Shivu, son of Somashekar’s Uncle.

Details: Yesterday afternoon, Somashekar, who had unloaded red mud for his brick klin located next to Lokapavani river, took Shivu along with him to wash his bullock cart in the river.

But the bullocks somehow managed to free themselves from the cart and reached the shore. Even Shivu managed to swim back to the shore but Somashekar was swept way and disappeared after being swept away to a distance.

The cart was found about 700 mts away and the villagers launched a search for Somashekar, but in vain. They later informed the Fire and Emergency Services personnel and Srirangapatna Town Police, who rushed to the spot, conducted a search to trace Somashekar with the help of local fishermen but were unsuccesful.

The search operation was suspended in the evening as it had become dark and was resumed this morning. The body was fished out at 1 pm near Arakere about 10 kms from the drowning spot.