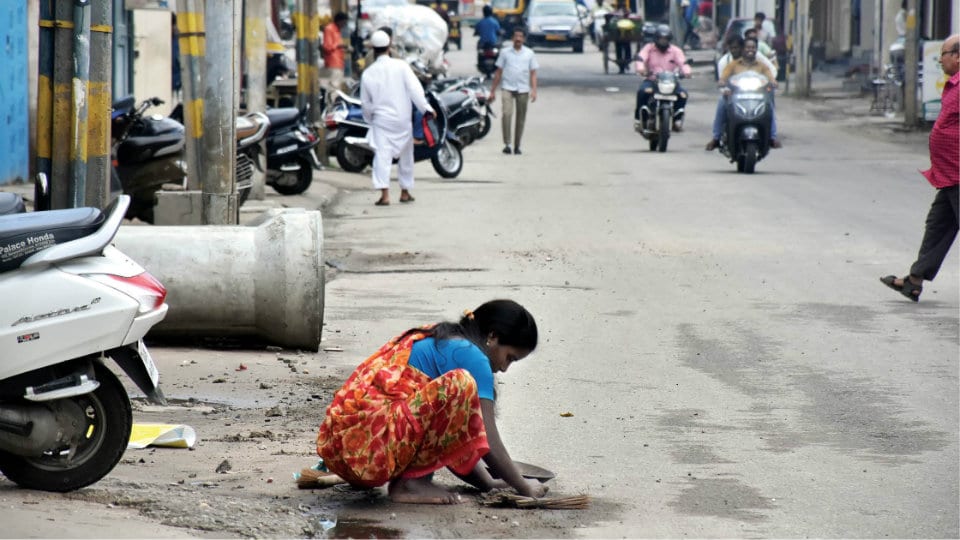 The gold-diggers of Unnao found nothing. In Mysuru, however, several men and women — almost 50 of them — find gold on jewellery streets, sewage drains, dirty alleys and every nook and corner of a dusty street.

Every morning, a group of men and women make their way to Ashoka Road and other roads that have jewellery shops and workshops. Armed with a brush, a pan and a small vessel, they start sweeping the streets with all their might.

They scoop out the black, slimy sludge and scour for every speck of dust and mud they can find. They are neither municipal sweepers nor people with Obsessive-Compulsive Disorder. They are gold hunters or people who literally sweep gold.

They come here to collect dust, grime, sewage water — whatever they can find from near jewellery shops and factories. Ashoka Road has several workshops, goldsmiths’ shops and mini factories where craftsmen cut and carve gold and silver pieces to make rings, pendants, chains and other ornaments.

Inadvertently, some gold particles get stuck to their hands, to the soles of their shoes, or even in their hair. When these workers walk out of the unit or wash their hands, the stray gold particles make their way out of the protected walls of the shops, onto the streets. And these gold sweepers lay claim to this hidden treasure.

They are the treasure hunters — gold scouts of bustling roads. Typically, the drains around jewellery streets have gold dust mixed with the sludge in the drains. The hunters use magnets and sieves to separate metal from the scrap and pass this metal on to persons who separate the gold from other metals.

They arrive on streets at 5 am and sweep them till some time and collect gold in powder form. After the streets are swept clean, the next stop in the process is filtering units where people silt the waste and look for collateral find.

How the gold is obtained?

They use mercury to draw out accumulated gold. Once it is collected, the gold is sold to dealers in the same area. It has become such an organised business now and there are networks of unorganised labourers who contribute to smooth running of this business.

These hunters collect several kilos of mud and sludge from roads outside gold shops and workshops. They know where they are and it takes them three to four hours, after which the mud is handed over to sifters where the sludge is washed.

Now the process of cleaning the collected sludge begins. Expert hands — like the ones of 39-year-old Armugam — submerge the pan completely in water. All the granules, clay and dirt will float out as they are lightweight but gold is heavy and it will sink to the bottom. Gold is always last in the race to leave the pan.

As Armugam sifts through the mud with his fingers, tiny specks of dull yellow metal emerge. Mercury is now added to the mixture and gold sticks to mercury. All that remains in the pan now is gold-laden mercury.

Next, particles are heated in acid as acid reacts with mercury to form solids. Gold, which is extremely inert, is left behind. “After heating the gold on a furnace, the liquid is poured into another vessel. A small blob left behind in the vessel is the gold. And the metal cools down, it is cleaned with soda to make it shine,” he explains.

If it does not shine, then it’s not gold. And the day’s find would be about 200-300 milligrams. After accumulating one to two grams over a couple of days, the metal is sold off to small-time goldsmiths.

“On an average, one sweeper can get up to two grams in a week. Each gram fetches us Rs. 2,800 and 100 milligrams earns Rs. 280. I have been doing this job since 20 years and my family members too are involved in the business. There are over 50 people in city in this trade,” he says.

Both the treasure hunters and gold traders share a strange symbiotic relationship. The gold sweepers keep the streets clean, in exchange for a few thousand rupees worth of gold, which would have otherwise flown away into the drain anyway.

Strangely, there are no marked territories or areas. Everyone is welcome, or at least, there have been no major disputes or fights. There are no rules. “We don’t fight for territory and it is always first-come-and-first-served basis. If we see some group sweeping a particular road, we quietly go to some other road. If you manage to find gold, it’s yours. Otherwise, you’re stuck with a pan full of sludge,” he says.