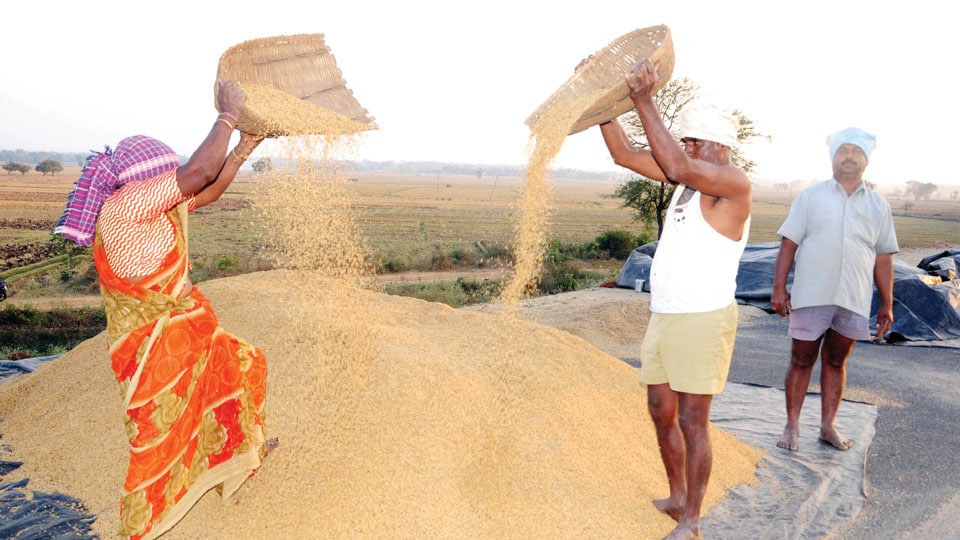 You may be familiar with the picturesque image of rice paddies — lush, green fields, perhaps stacked in terraces — but do you know how rice gets from the paddy to your plate? The process is seriously labour-intensive, requiring more steps than you might think would be necessary for such tiny, little grains. A staple found all over the world, rice is grown everywhere from Minnesota to Myanmar and from Malaysia to Mysuru. The focus of this Weekend Star Supplement is rice harvesting in Mysuru region where farmers are finding it difficult to rent out harvesting machines in this peak season.

Unlike in the West, not much mechanisation has taken place in the agriculture sector in India. And even those using machines hold a grievance that they cannot use it all through the year, or they are not available on rent when needed.

Our agriculture experts, who keep on harping that mechanisation helps increase production, are however, blissfully ignorant about the lack of its popularity among farmers. One of the reasons why such machines are not popular is due to non-availability of machines.

Ever since mechanised equipment was introduced in India, paddy or ragi harvesting season has witnessed a growing trend towards the use of harvesters. Till a decade ago, most of the paddy was harvested manually, mostly by landless or near-landless farm workers from the same or neighbouring villages.

During crop harvesting, workers are in great demand as all landowners need them. This, in a way, improved the bargaining strength of what was otherwise the weakest and most vulnerable section of rural society.

However, with the rapid spread of harvesters, farm workers lost employment which was most important. While millions of person-days of employment have been lost in this way in recent years due to mechanisation, hardly any attention has been given to this disturbing trend by the Government. In addition, millions of tonnes of fodder have been lost. While manual harvesting preserved crop residues as fodder, combine harvester squanders valuable fodder.

Much Depends on Dinner

Rice is a key commodity to combat world hunger. It is vastly important to the survival of the human race. It is the main sustenance for half the population of the earth and if some catastrophe was to kill all the rice crops of the world, at least a billion and a half human beings would suffer acute hunger, and millions would die of starvation.

Growing rice occupies the entire lives of over a billion people and it constitutes the only source of buying power for as many millions. Rice is not only significant in the biological welfare of the human race but it is also a creator and controller of human society. Rice touches power structures, technology, population figures, personal relationships and religious custom, says Margaret Visser in her book ‘Much Depends on Dinner’.

From green to golden brown

Farmers in Mysuru and Mandya region (command areas of Krishna Raja Sagar Dam (KRS) and Kabini reservoirs) took up paddy cultivation as the dams are full and the continuous availability of water was assured. Cultivation was taken up after a long break as the authorities had forbidden its cultivation because of drought last year. They wanted the water in the reservoirs to be used for drinking purposes only. With heavy rains till the end of October 2019, both KRS and Kabini have not only attained full reservoir levels but the dams have maintained the full level even in the month of January. Also, this feat has been achieved after Karnataka has fulfilled its obligation to release water to Tamil Nadu.

READ ALSO  Over 9,000 Corona Warriors up in arms against pandemic in Mysuru

Now the crop has reached its fullest growth where the colour of the grain has turned from green to golden brown and ready for harvest.

The bad news for the farmers, however, is they are finding it difficult to procure paddy-cutting machines or harvesters to cut and stock up or market their standing crops. Paddy that was sown 190 days back (this crop is typically grown in 190 days) has now grown fully and farmers are hoping a rich harvest this time.

But the farmers are a worried lot as they are finding it difficult to get paddy cutting machines on time as any further delay may result in a dip in yield. The farmers are also concerned that the standing crops will wilt causing withering of paddy if there is anymore delay in harvesting. As a single paddy-cutting machines cost anywhere between Rs.25 and 30 lakh the farmers are unwilling to invest such a huge amount of money. Also the use of these machines is only seasonal and as such no farmer seems to show interest in purchasing the machine at such a huge cost. Instead, they opt for procuring them on rent (hire).

According to the statistics available with the Agriculture Department, paddy is grown in one lakh hectare (2.5 lakh acres) in Mysuru district and in most of the places the crop is ready for harvesting. With farmers finding it difficult to get labourers for harvesting, they are eagerly looking at the other options of hiring paddy-cutting machines. As most of the standing crops are ready for harvesting at the same time, the growers are worried that they may not get the machines at the time they need them the most.

Some help from Tamil Nadu

The machines are arriving from Salem, Mettur, Erode and Coimbatore much to the relief of farmers who are heavily dependent on them for harvesting as finding farm labourers is getting difficult with every season.

Joint Director of Agriculture Dr. Mahantheshappa said that paddy has been grown in 2.5 lakh acres in the district this season and harvesting has been completed in some places. But there is a delay at some other places as there is labour problem and also due to non-availability of paddy-cutting machines. With the machines in great demand, there are complaints that the owners of the machines are demanding a higher rent. The district administration has fixed a rent of Rs.2,300 per hour for chain-driven machines and Rs. 1,400 per hour for tyre-driven machines and the machine owners are not supposed to collect more than the stipulated rent.

The Agriculture Department has planned to set up agricultural machinery and equipment centre where farmers can procure the needed equipment upon payment of hire charges. The centre will have 33 machineries, including paddy cutter, tiller, rotavator, power sprayer, disc harrow and digger Dr. Mahantheshappa added that the Department will ensure that the machines are available by next season.

Waiting for Wind to Winnow

Winnowing, the process of separating quality grains from chaff, is a crucial process in the cultivation of paddy. The traditional way of winnowing is making the dried grains fall from a height using shovels and a sieve. The quality grains which are heavy fall vertically while the weightless chaff and straw get blown away by the wind.

Thus, winnowing is effective only when there is a wind. Farmers often have to wait for hours for the wind to blow before they could start the process of winnowing. The process is also called wind-grading. Winnowing can also describe the natural removal of fine material from coarser sediment by wind or flowing water. This is similar to separating paddy from chaff.

Engine catches fire due to grain threshing on roads

A family of five travelling in a Maruti Omni van had a providential escape when their vehicle caught fire on the road where horse gram was laid by farmers for the threshing process. As the vehicle moved on the road, the dry stalks and chaff caught fire due to friction and force exerted from the four tyres.

The incident occurred recently near Gundlupet on the stretch between Bheemanabeedu and Hulusagundi where farmers had covered the road with the crop for easy threshing. The fire that started at the base of the vehicle in no time spread to the engine and within moments, the entire vehicle was engulfed in flames.

The vehicle had five family members and Ashoka was at the wheels from Kalpetta in Kerala. The fire did not come to the notice of the occupants of the vehicle. However, villagers saw the fire and signalled the driver to stop, thereby saving the family.

The tradition of threshing paddy, horse gram, jowar and ragi crops on roads to separate the crop from sheaves is an age-old one where farmers depend on buses, lorries, cars and bikes to run on harvested crops spread out on roads to be threshed.

Threshing is the process of loosening the edible part of grain from the husks and straw to which it is attached.

It is the step in grain preparation after reaping and before winnowing, which separates the grain from the chaff.

This process however is dangerous at times as vehicles catch fire as they travel fast on the crop-laden roads. Also, as the vehicles pass the roads laden with crops, they skid and due to dust, they can’t see vehicles that are moving ahead, resulting in accidents. Very often, straw gets entangled with the wheels of the vehicles, sometimes causing them to slip off the road. Motorcyclists face this danger most of the times.