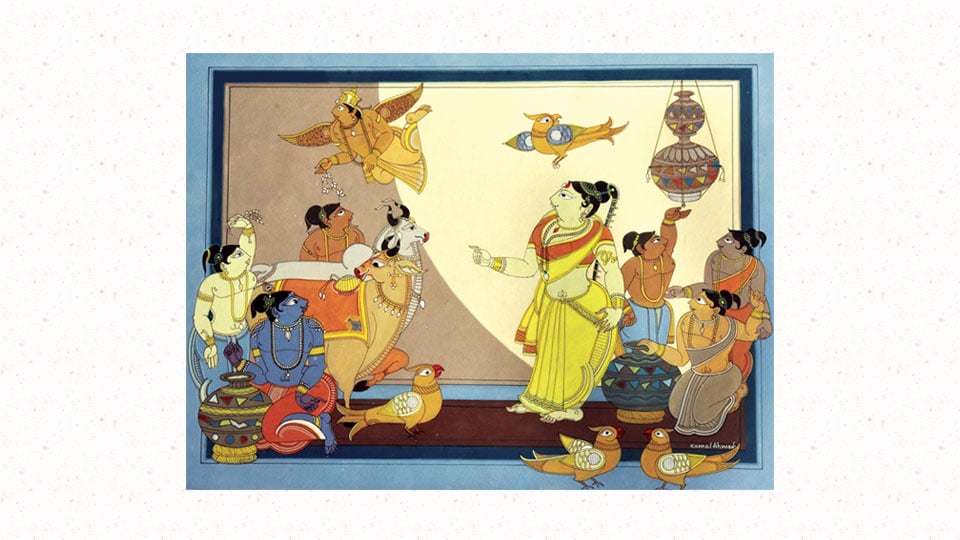 As the New Year rolls in, so also gifts. And like all offices do, I too get annual diaries and calendars as gifts. But this year, a gift rolled into my office that reminded me of an India we all have forgotten but exists.

The gift arrived in a narrow and long three-foot high box. It was beautifully wrapped. The note on it said it was from R.G. Singh of Ramsons Kala Pratishtana art foundation. Since I don’t like tearing off gift wraps as I reuse it I began to unwrap it slowly by peeling off the tapes holding the edges.

I found it wasn’t the end as there was another sheet of plastic wrapper underneath. So I unwrapped this too, only to find a bubble wrap beneath it. I was starting to feel irritated and wondered if this was a prank where I will only find a ball of paper in the end. Just then R.G. Singh called to check if I had received the gift and what I thought of it.

Irritated, I asked him if he had sent me Draupadi? Confused, he asked me, “What do you mean?” I replied, “Because the unwrapping of your gift seems to be never-ending.” Finally, after the bubble wrap, I thought it was finally over but again there was a newspaper cover. At wits end, I ripped it apart and viola! There lay before me a beautiful painting of Lord Krishna playing with his friends. The painting is not striking, but like its painter it, was subtle, humble, precise and artistic.

But what made this painting a great gift was not just the image of Lord Krishna but the painter whose work I always wanted but never could get — Kamal Ahmed from Gadag.

More importantly, Kamal Ahmed is the manifestation of how art and society benefit when there is kindness and acceptance above religion.

Kamal was born in a poor Muslim family in Gadag, North Karnataka. That he had six other siblings didn’t make life easy. The financial burden hindered his education until he was accepted into the Thontadarya Mutt in Gadag.

At the Mutt he got free education and food. And it was here that he was exposed to Hindu mythology which inspired him to begin his artistic journey. And today, he is a practising Muslim who loves painting Hindu Gods and their stories. In the case of Kamal he likes painting especially Bala Krishna.

Now, thanks to an open-minded Muslim family that admitted their son to a Hindu Mutt choosing their child’s education over religion and thanks to a Mutt that saw a poor boy who needed education rather than a boy of another religion.

Thanks to a non-threatening environment, a young boy absorbed the stories of a new religion without prejudice or suspicion that today we have an exemplary artist with a unique style. An artist who, while performing namaz at his local mosque in Gadag, travels all the way down to Udupi to visit  the Krishna Temple to feel inspired.

Now, this painting hangs in our office as a symbol of what India is and should be. This painting is a new addition to a painting by Mohammed Osman, also a Muslim artist from a village near Hyderabad, who too loves painting Lord Krishna but more so decorated Basava during Sankranthi.

In these turbulent times where people have become so divisive, people like Kamal and Mutts like Thontadarya Mutt should be an example in acceptance and kindness.

Speaking of example, here is another one. The story of a young boy named Naveen Kumar, the State  topper in Arts for 2014.

Naveen hails from a remote village called Talamari in Raichur district. I had visited that village after the 2009 floods, it was a place with no future.

Naveen’s father, Venkatesh, works as a hamali and his mother, Divya, is a daily wage worker in fields. It seems, though Naveen had passed SSLC with 85 percent, his parents asked him not to study further as they could not afford his education. Instead, they wanted him to be a daily-wager so the family could have a little extra income.

A Chemistry teacher, one Khaleed, heard that Naveen was going to discontinue his education and become a daily-wager. It disappointed him that a boy who got 85 percent in 10th was giving up education. So Khaleed visited Naveen’s parents and convinced them that their son needed to study further.

When Naveen’s parents expressed their inability to pay the college fees, Khaleed convinced Infant Jesus Pre-University College management to significantly reduce his fees. Then Khaleed made sure Naveen got accommodation in the Backward Classes and Minority (BCM) Hostel.

Naveen soon moved into the overcrowded hostel and survived on the limited food and used the college library. Two years later, he secured the 1st Rank in Arts category in the 2014 State Board exams. He scored 574 out of 600. He had secured 98 in Kannada, 95 in Economics, 94 in Sociology, 95 in Political Science, 100 in History and for a village boy who always studied in Kannada medium, scored 92 in English!

Now that’s a Rank worth celebrating — A poor talented backward class Hindu boy, saved by a concerned Muslim teacher, fostered by a Christian institution. Wah! Every one of them, chose their human emotion, the act of kindness, above their faith.

May be, the above stories, true stories, of simple Indians, will inspire the new class of educated, overly aggressive, opinionated, ill-informed and prejudiced urban Indians to be kinder Indians with the sublime sentiment of acceptance in the New Year.

Thank you dear readers, I wish you all a Happy New Year and may the year ahead be filled with acceptance, tolerance and kindness.