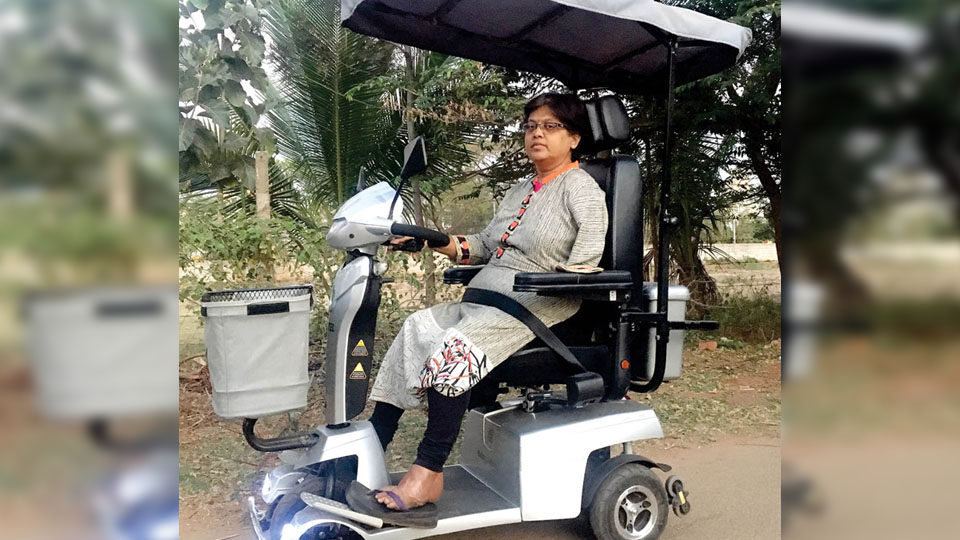 Anitha Ravindra, a true inspiration for every woman

She was born as any other normal child but the fate wasn’t on her side, as the six-year-old girl met with a gruesome accident when a lorry ran over her, unfortunately resulting in her losing out on her left hand and the left leg.

Further during treatments, the high dosage of drugs she was put under also made her partially hearing impaired. But the brave girl that she was, she fought all odds to grow as an independent woman to a level where she is now pursuing her Ph.D in Education, undeterred by her physical disabilities. The woman we are talking of is Anitha Ravindra, who works as a teacher in Economics at the Demonstration School in city.

Star of Mysore had a brief interview with her on the occasion of International Women’s Day. Excerpts…

SOM: How difficult was it for you to grow after going through such trauma as a child?

Anitha: I actually faced no problem while I was a kid. But, it was during my high schooling when I was diagnosed for hearing impairment, that the reaction and behaviour of people around me started changing. It was harsh and hurting. Even today when I go out in public few people look at me as though I am an alien. But with time, I have learnt to ignore them as I have developed a hard shell against all that around my self now. In reality, everyone faces restrictions including those with a normal lifestyle. But, sadly, many think that people like us take advantage of our condition for our personal benefits which is not true.

SOM: Has it been difficult to work as a teacher with the condition you are in?

Anitha: Teaching is one thing I love so much. Never ever I have found difficulties to carry out my professional duties. I believe that being a teacher is the best profession one can have. Like I said earlier, I do have some restrictions. Before taking the class, I tell about myself and my disabilities to children and I even ask them to speak a little louder so that they are audible. Moreover, I don’t even sit while taking classes and I make sure to walk around explaining them about the topic that is taught for the day. My students have been co-operative and have made my life easy.

SOM: What’s your opinion on the atrocities against women that is rampant in the society?

Anitha: According to me laws against sexual harassment have not been strictly implemented. Being a victim of disability harassment and sexual harassment myself in my work place and having complained about the same, the Disability Commission has passed the judgment in my favour with few suggestions which are yet to be implemented by the NCERT. With respect to the complaint on sexual harassment which I had filed, the committee from the Department of Women and Child Welfare has also found the allegation made by me to be true and I am currently waiting for the High Court judgment. But, being a disabled woman, I have been subjected to continuous mental torture, with two persons in particular against whom I have filed a sexual harassment case having falsely filed a case against me in turn. This is being done to scare me and make me withdraw the case against them.

SOM: How has the family support been in all your endeavours?

Anitha: My family has been very supportive since the beginning. My parents, who are no more, ensured that I do not go behind people asking for help because of my disabilities. Instead, they made me strong, self reliable and also independent. I met my husband (M.S. Ravindra) in a cricket and we decided to enter the wedlock. My son is also co-operative but he is finding it hard to understand why I am not like any other normal mother. I am trying to make him understand and hopefully he will come to terms with the facts soon. I wish to add that NCERT has also been very co-operative since the day-one I started to work for the organisation. The council helped me to procure the special vehicle which  has helped me to travel with ease from school to home and vice versa.

SOM: Your message on the occasion of International Women’s Day?

Anitha: Women, especially those who are specially-abled, are on par with all other women. They need not bow to the pressures from the society but instead face them boldly to achieve their goals.

Women in general are capable to doing any work apart from taking care of their family and loved ones which people need to strongly acknowledge.