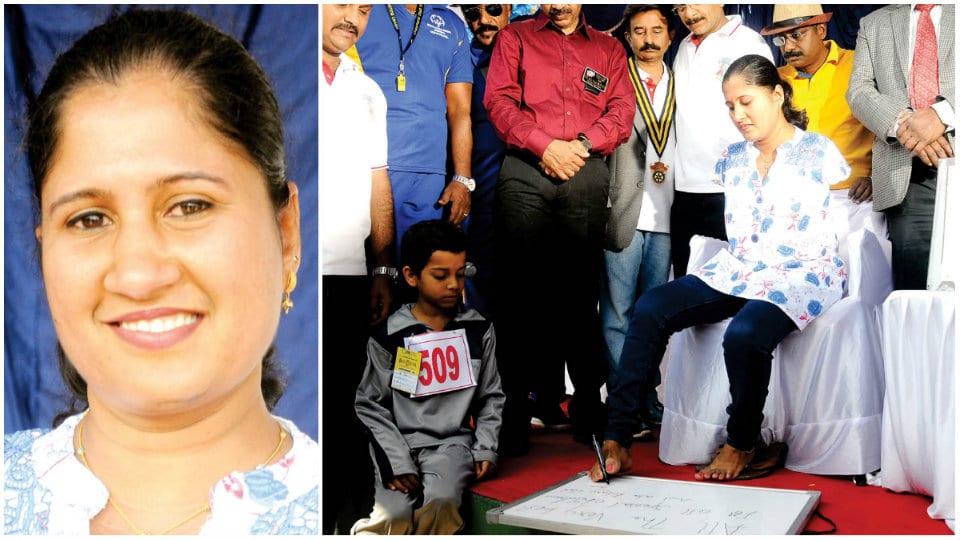 Sabitha Monis, champion for the specially-abled

Though the world has evolved itself over centuries with humans reaching up to Mars and Moon, many unfortunately still live in the old time frame, when people once believed that being born as a differently–abled child was a curse. However, only few have realised that being differently-abled is also a  blessing and have gone out of their way and achieved great fetes. One such inspirational person is Sabitha Monis, who was born without her hands. But same never hindered her life in anyway.

Sabitha having lost both her hands by birth lost no hopes as a kid. Instead, her disability made her so strong that she ensured she learnt to write with her legs.

Star of Mysore met Sabitha Monis for a brief chat during her recent visit to Mysuru to inaugurate ‘Bhandhavya-2017’, sports competition for the specially-abled organised by Rotary Mysore Mid-Town. Excerpts…

SOM: For many, special kids are still a curse. What’s your thought?

Sabitha: Unfortunately, though there have been many awareness programmes on the issue, still many of the specially-abled kids are not given the care they deserve. They have to be treated as any other normal kids with love and affection which inspires them to make the best of their lives and enter the mainstream society.

SOM: Are you satisfied with the programmes announced for the welfare of the specially-abled?

Sabitha: The government is already providing them with free education.  But it can do much more which actually helps the parents of these kids look after their children better. Teachers, who are in-charge of building the future of special kids must be provided with proper training and extended additional facilities, as they put in an extra effort to build the lives of these kids so that they get to enjoy a good professional life as they grow up.

SOM:  Was it difficult for you to grow as a special kid?

Sabitha: There was not a single problem at my home as everyone supported me. But, at the time when I wanted to join the school none of them gave me admission in normal schools and instead suggested my parents to put me in a special school.  With a lot of disappointment we had return home as we couldn’t go to Mangaluru to join special school.

SOM: Then how did you manage to join a school?

Sabitha: Though I was denied admission, I made sure to attend the anganawadi school from morning till afternoon and later sat with I std students at a government school in my native.  Once, it so happened that an officer came for an inspection and took the head master to a task for denying me the admission. Later, I was admitted to the same government school.

SOM:  What inspired you to start writing with your legs?

Sabitha: I don’t quite remember when I started to write with my legs. But, my parents say that at the time when my brother and sisters would be doing their homework even I started writing with my legs holding a chalk piece.

SOM: How difficult was it for you to write with your legs?

Sabitha: I didn’t find it difficult at all. Even today I feel very comfortable to write with my legs and never felt I am any different compared to other children around me.

For this, I am glad that my parents have helped me grow up to a level where I can take my own decisions and lead a decent life based on my own will and wish.