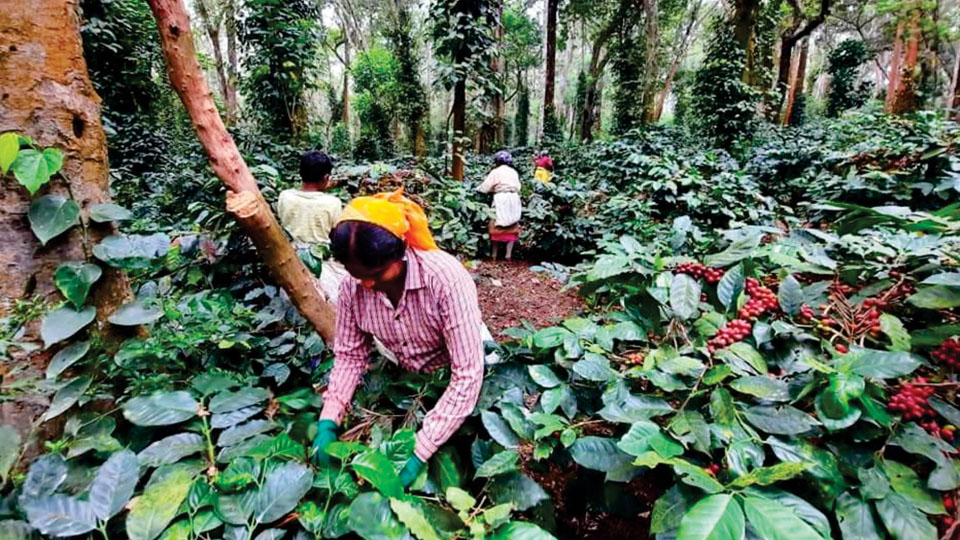 Mysore/Mysuru: Here is a chance for coffee growers to get additional cash from their plants throughout the year apart from income from the sale of beans. Mysuru-based Central Food Technological Research Institute (CFTRI) has developed a technology to prepare a value-added product from coffee leaves that packs in health benefits too.

Coffee is only harvested for a few months every year, depending on the country’s harvest season. This can leave a number of producers and workers without work (and income) for a significant portion of the year.

However, some producers have decided to diversify the crops that they grow and sell. As coffee leaves are constantly being produced, growers can harvest them in the off-season if there is demand, according to Pushpa S. Murthy, Principal Scientist (Spice and Flavour Science Department) of CFTRI.

This technology follows a CFTRI project on the development of value-added products from coffee leaves taken up in 2019. The project was funded by the Union Ministry of Food Processing Industries.

If farmers can use the leaves which can be harvested during the off-season or during pruning, without interfering with coffee bean growth, it will have a great impact on the social elevation of coffee farmers, she said.

Around 70 percent of the coffee industry is unemployed or underemployed during nine months of the year due to the nature of the growth cycle of the coffee beans. The project aimed to provide a year-round sustainable process for the coffee farmers.

With CFTRI technology, the brew can be prepared with water, allowed for a few minutes to steep, filtered and consumed. The institute has initiated the transfer of this technology to the coffee industry, and a few industry participants have already extended their consent, she said.

READ ALSO  An interview that puts science at the forefront...

The leaf brew does not really taste like coffee, according to Murthy. “The brew is subtle with less caffeine compared to coffee or tea,” she said. On the nutritional value of the beverage, she said coffee leaves are rich in phenolic acids with potential health benefits. A coffee leaf contains around 17 percent more antioxidants than green tea. The beverage should be consumed plain.

The beverage accords health-promoting polyphenols like chlorogenic acid and mangiferin which help in reducing blood glucose levels, inflammation and blood pressure, she said.

Coffee leaf tea has been consumed in Sumatra, Ethiopia, Jamaica, Java and Sudan for centuries. From the 16th century to the 19th century, Ethiopian farmers set aside their harvested coffee for trade or consumption in special ceremonies. As a day-to-day drink, the Harari people in Ethiopia instead enjoyed ‘kuti’.

‘Kuti’ tea was made by boiling coffee leaves in hot water, sometimes with a pinch of salt or some sugar. It was generally boiled for at least 30 minutes, as it was believed that the longer the leaves were boiled for, the sweeter the resulting brew would be.

Coffee leaf tea bears some similarities to green tea, but it is more earthy and sweeter. It is lower in caffeine than green tea, and thanks to its high levels of antioxidants, it has historically been believed that it cures or relieves cold symptoms.

In the 19th century, Dutch colonists transported coffee plants to designated farming regions in Indonesia. Workers on the coffee plantations were forbidden from consuming the coffee they harvested, so they drank something called “kahwa daun” instead.

‘Kahwa daun’ was made by drying coffee leaves in the sun to reduce their bitterness. The leaves were then smoked and roasted for a few hours. Finally, they would be steeped in boiling water, and then served in a coconut shell.