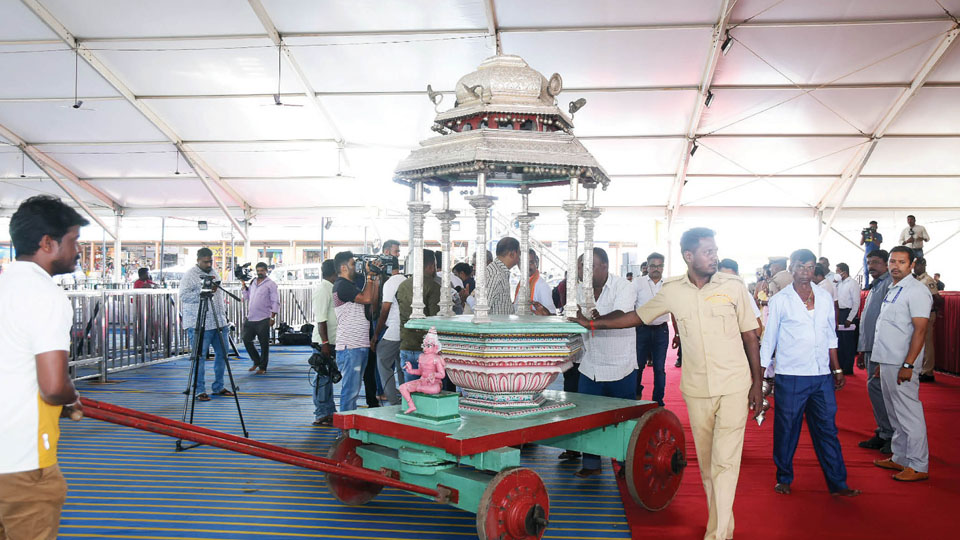 Public entry barred from morning till 11.30 am; Dasara inauguration between 9.45 am and 10.05 am Security tightened; Hill Temple wears a bridal look Silver chariot cleaned, polished, decorated

Mysore/Mysuru: For the first time in the history of Dasara, the 10-day Nada Habba will be inaugurated by the President of India Droupadi Murmu tomorrow (Sept. 26) in the auspicious Vruschika Lagna between 9.45 am and 10.05 am atop Chamundi Hill.

The President will shower flower petals on the decked-up idol of Goddess Chamundeshwari on a silver chariot along with Chief Minister Basavaraj Bommai amidst chanting of mantras.

The President’s short visit to Mysuru will be limited to the Dasara inauguration and her special aircraft will land at Mysore Airport in Mandakalli at 9 am. She will be received by Governor Thaawarchand Gehlot and the Chief Minister.

From the Airport, her cavalcade will proceed directly to Chamundi Hill where the President will first have a darshan of the Goddess inside the sanctum sanctorum of the historic Temple.

After offering prayers and accepting the honours from the Temple management, the President will head towards the traditional silver chariot where the decked-up Utsava Murthy of the Goddess is placed and she will inaugurate the 10-day Navarathri along with the CM and the Governor.

A high-security water-proof rest house and lobbies have been set up for the President and German Tents have been used for the purpose. The tribals of Hunsur, Periyapatna and H.D. Kote have made a request to the President’s Office for some photographic moments with the President who hails from the tribal community.

Though initially the request was turned down, it was later permitted. A place to the right side of the Chamundeshwari Temple has been readied for the select 14 tribals to take photos with the President.

After the inauguration, the President will head back to the Mysore Airport and fly to Dharwad to attend a programme there. CM Basavaraj Bommai too will accompany the  President to Dharwad.

During the Dasara inauguration, entry of devotees to the Hill Temple will be banned till 11.30 am and the doors of the Temple will open to the devotees only after the President leaves the venue. However, there will be no restriction for the people to participate in the inaugural moments. The darshan of the Goddess will resume after the inauguration, says a press note from the District Administration.