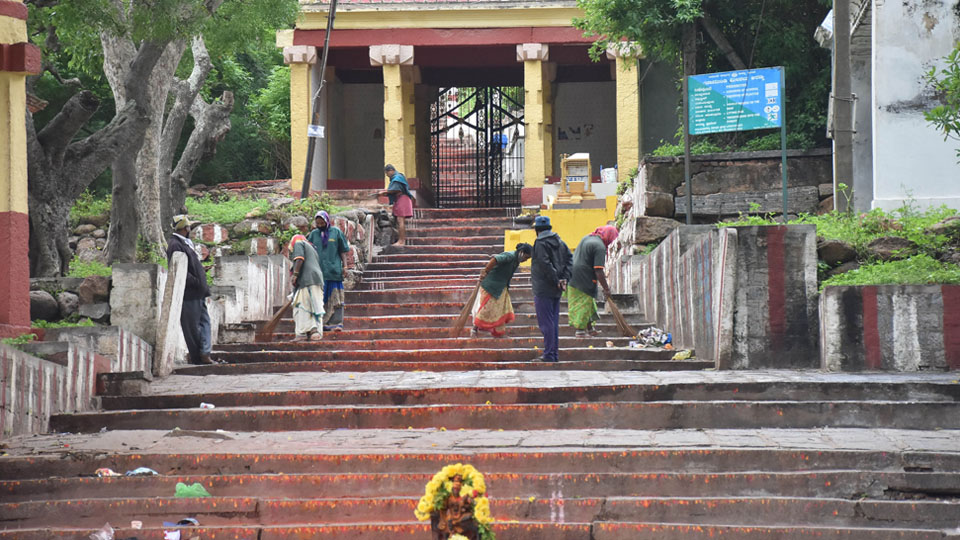 Chamundi Hill temple shut for devotees on public holidays too

MysoreMysuru: Following a Government direction in the wake of COVID-19 crisis, Deputy Commissioner Dr. Bagadi Gautham has ordered a ban on devotees visiting Chamundi Hill temple, Chamundi Hill and Jwala Tripura Sundariamma temple at Uttanahalli in the taluk on Amavasya Day (New Moon Day), Fridays, Chamundi Vardhanti Day, all Saturdays and Sundays and public holidays coming in the Ashada month, as a precautionary and safety measure.

In a press release, Chamundi Hill Temple Executive Officer (EO) said that despite the ban, it has become a common sight to see devotees making attempts to visit the Hill temple somehow and returning disappointed after being denied entry.

Pointing out that the customary pujas and rituals will be performed in the temple, the EO said that  the entry of devotees through the hill steps too has been disallowed during the banned days of  Ashada month. Also, there will be no Dasoha or Prasada distribution atop the Hill, which the devotees should take note of.

Barring the vehicles of Government servants and other dignitaries on protocol duty, all other public and private vehicles have been banned from entering the Hill, the release said.

Despite the ban order, devotees from different parts of the city and other places were seen making  attempts to visit the Hill temple either by foot or through vehicles on the second Ashada Friday today. But a strong Police presence thwarted their attempts by blocking the road with the erection of barricades at the start of the road leading to the Hill temple. As such, the devotees had to return disappointed.

The same was the case with Hill temple footsteps too, with devotees trying to climb the Hill through narrow and irregular foot routes along the steps. But they were stopped at the entry of the steps itself by a large posse of Policemen who were deployed at the spot for taking all measures to thwart any such attempts. Some devotees were seen worshipping the idol of Goddess Chamundeshwari at the entry of steps and returning thereafter.

Last year too, the entry to Chamundi Hill temple was banned for devotees after the deadly COVID-19 pandemic broke out in March 2020.