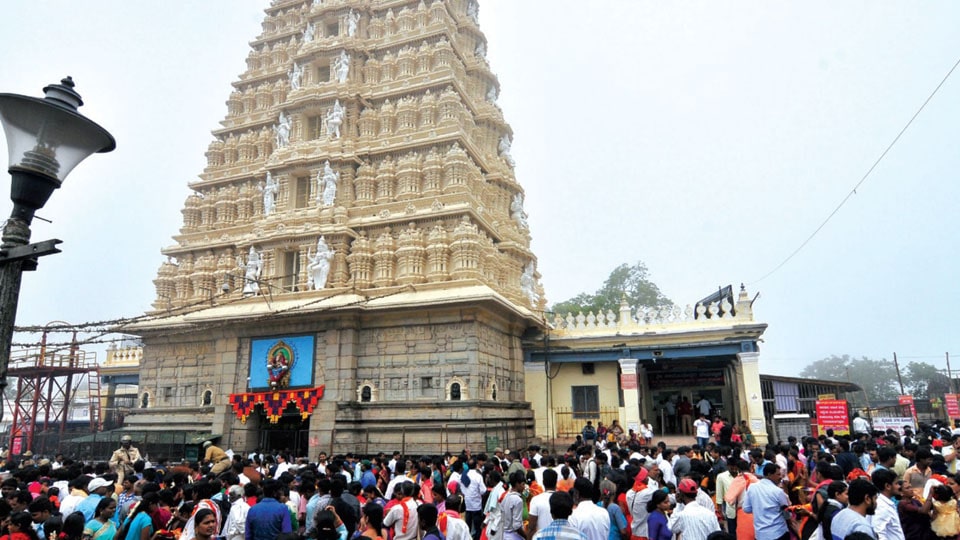 According to temple sources, there has been a steady increase in the number of devotees who visit the shrine, an important and popular pilgrimage centre in South Karnataka, annually and the numbers peak during Ashada, Chamundeshwari Vardhanti and Dasara.

Apart from entry tickets, the temple gets good revenue from its hundis (offering box) and is considered as one of the richest temples in Karnataka after Kukke Subramanya, Dharmasthala Manjunatheshwara and Malai Mahadeshwara temples. Apart from cash, the temple also receives donations and gold and silver as offerings.

From the auction of sarees donated by the devotees to Goddess Chamundeshwari, the temple raised an income of Rs. 1,73,55,516 in 2017-2018 while it collected Rs. 1,49,02,620 in 2016-2017. Apart from revenue from various puja rituals, the Hill Temple gets revenue from the sale of prasadam, rent from guest houses, money orders and demand drafts sent by devotees, interest from fixed deposits, online and e-sevas, different contracts by the temple and the rent from Dewan Poornaiah Hall and from different contracts at temples located at Mysore Palace premises.

Among the devotee-friendly steps taken by the temple administration in 2017-2018 are to distribute free ladoos for those who have taken Rs. 100 direct entry tickets, provide free breakfast and prasadam (like puliogare) distribution in the morning and evening along with free lunch.

To attract more and more tourists, the temple administration has set up two Viewpoints near the Nandi Statue with binocular facility, said Prasad. He added that almost all the sevas of the temple including Chandika Homa and saree donation have been made online and devotees can also make online payments on the temple website. Devotees can even interact with the temple management through the interactive website, he said.

At the temple premises, card swiping machines have been installed so that tourists can make the payments conveniently. “Rs. 78,19,10,742 has been kept as fixed deposits at various nationalised banks. To ease the drinking water shortage atop the hill, the temple management has initiated a project worth Rs. 6.95 crore and works are under progress,” the Executive Officer added.