Home » News » I have a chance to become CM again if elected from Chamundeshwari: Siddu 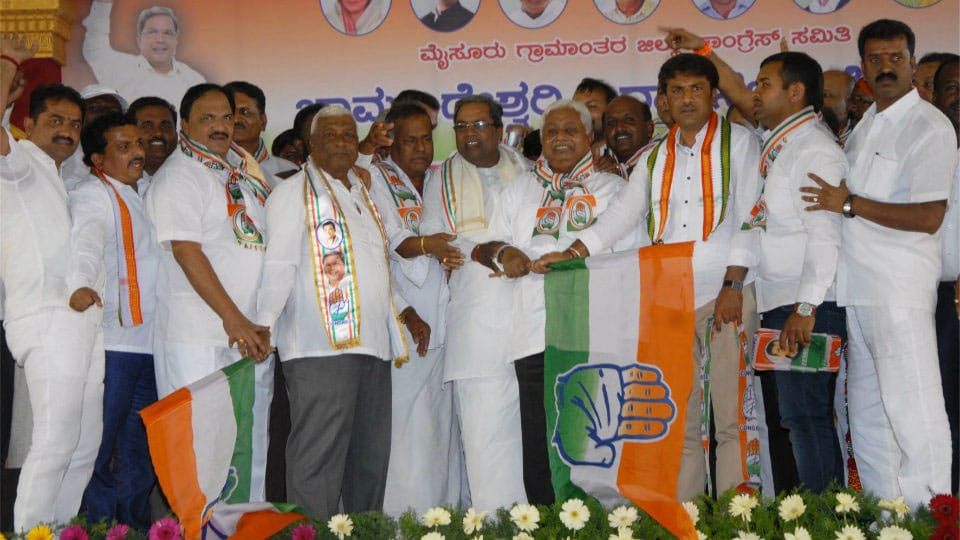 I have a chance to become CM again if elected from Chamundeshwari: Siddu

Mysuru: Claiming that the country’s political scenario will change if the Congress retains power in the State, Chief Minister Siddharamaiah on Monday, appealed the people to elect the Congress again in the forthcoming Assembly polls.

Addressing a party workers rally at Jayapura in the taluk which falls under Chamundeshwari constituency, Siddharamaiah who has declared that he would contest from the constituency, appealed the voters to ensure a thumping victory for him as he has the chance to become the CM again.

Asserting that the BJP and JD(S) would not come to power in the Assembly polls, he said that, JD(S) leader H.D.Kumarswamy’s ‘Kumaraparva Rally’ and the BJP’s ‘Parivartana Rally’ will have little impact on the electorate.

Terming the BJP as a communal party with no ideologies, he said that the Congress was an inclusive party working for the welfare of all sections of the society.

Accusing Chamundeshwari sitting JD(S) MLA G.T. Devegowda of doing little for the development of the constituency, the CM without naming GTD, said that the legislator was touring the constituency making false claim.

Declaring that this would be his last election and he had chosen Chamundeshwari segment which greatly helped him to climb the political ladder, Siddharamaiah reiterated his appeal to the voters to elect him, as he was indebted to the constituency.

Stating that he was the first Chief Minister after D. Devaraj Urs to complete a five-year term, he said that the many ‘Bhagyas’ such as Anna Bhagya, Ksheera Bhagya and Arogya Bhagya had largely benefited the economically weaker sections of the society.

Recalling his election from Chamundeshwari constituency in the bitterly fought by-election in 2006 when H.D. Kumarswamy was the CM, Siddharamaiah said that he knew the pulse of the people and he was  sure of his victory in the forth coming elections.

Renewing his attack on the BJP, the CM accused Prime Minister Narendra Modi of making baseless corruption charges against the State  Congress Government.

Listing out his Government’s achievements over the past five years, he challenged PM Modi to prove the charges. The CM further said that he would quit politics if the charges were found to be true.

Rubbishing the Opposition claims that he (CM) had amassed illegal wealth, Siddharamaiah said he was ready for any probe.

The CM welcomed them into the Congress fold by giving them the party flag.

Senior JD(S) leader Mavinahalli Siddegowda, a long time associate of the Chief Minister, who spoke after joining the Congress, said that he would stay with Siddharamaiah till his end.

Explaining the reasons for quitting the JD(S) to join the Congress party, Siddegowda said that the CM was his old friend and the two grew up together politically.

Stating that he had no ill will for JD(S) leaders, Siddegowda said that he had to leave the party because of the attitude of MLA G.T. Devegowda.

Asserting that he had joined the Congress only to ensure development of Chamundeshwari constituency, he said he was very much hopeful that the CM would address all issues related to the constituency.

ONE COMMENT ON THIS POST To “I have a chance to become CM again if elected from Chamundeshwari: Siddu”