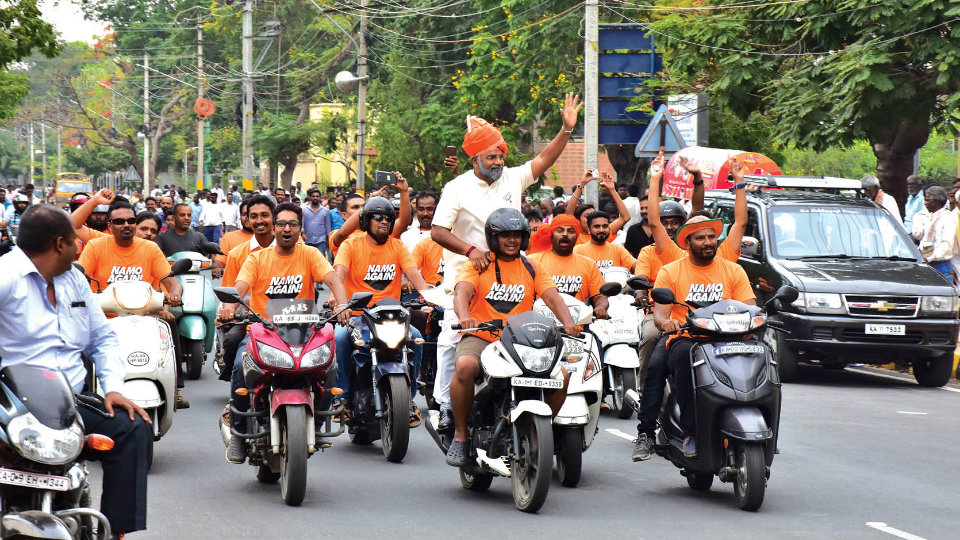 Chants, Cheers for ‘Chowkidar’: Modi-lookalike astride a bike draws attention

Mysuru: The Maharaja’s College Grounds came alive yesterday with chants of “Modi” renting the air. As per schedule, Prime Minister arrived on time and began addressing the rally at 4.50 pm. The atmosphere was cool as it had rained heavily a day before the PM’s rally.

The crowd charged up as Modi began his speech in Kannada where he invoked Sir M. Visvesvaraya and the Wadiyars.

As the Prime Minister walked into the stage, MLA Ramdas announced, “Chowkidar Narendra Modi Jai” and the crowd cheered and joined Ramdas’ slogans. Modi too waved to the gallery and took his seat. Interestingly, Modi spoke in Kannada both at the beginning and at the end of his speech.

Though he used a teleprompter for his Kannada speech, his language was clear and all the Kannada words he spoke had clarity and were pronounced perfectly. This was enough for the crowd to accord thunderous applause to the Prime Minister.

“Chowkidar in villages, Chowkidar in towns, farmers, students, engineers, lawyers all are Chowkidars,” he said in Kannada and the crowd stood up and cheered “Modi Chowkidar.”

Seeing a massive crowd of more than one lakh people at the ground that was bursting in its seams, Modi too left no opportunity to get those gathered to chant ‘Main Bhi Chowkidar’ along with him. The BJP strongman was cheered by many who responded with enthusiasm to his call of ‘Phir ek baar…’ as well as his opening line, in which he greeted those who were attending the meet, in Kannada, calling himself ‘Nimma Chowkidar’ (your chowkidar).

People had come from far and wide, from places including Kodagu and Chamarajanagar and the specially erected pandals were overcrowded, forcing people to sit on the main roads. Many who could not get a seat watched the PM’s speech from the LCDs which had been installed at the venue.

There were more people present than the pandals could accommodate and the outliers held back, staying behind the reaches of the shade from trees around the edge of the ground. They even took shelter around the fencing of the Ground.

When Modi took the stage and his armed guards spread out around him, the roar of the crowd was deafening. And once he began to speak, crowd became dead silent and all were listening with rapturous attention.

Before the Prime Minister arrived at the Maharaja’s College venue, his cavalcade drove from Mysore Airport at Mandakalli to the city centre. His convoy was cheered by people who had lined up by both the sides of the road. When the cavalcade reached the Gun House Circle and proceeded towards Ramaswamy Circle, the convoy moved slowly and the crowd waved at Modi and he reciprocated.

A Maruti Alto car was altered and a cut-out of Modi was placed on top of it and the vehicle was parked near the Ekalavya Circle. Hundreds of youths climbed the car and stood on top of it taking selfies with the Modi cut-out.

Expecting a huge crowd, many push-cart vendors had set up shop around the rally venue and they made brisk business. Apart from snacks and pani-puri, even ice-creams, cold drinks, tender coconut and sodas were selling like hot cakes.