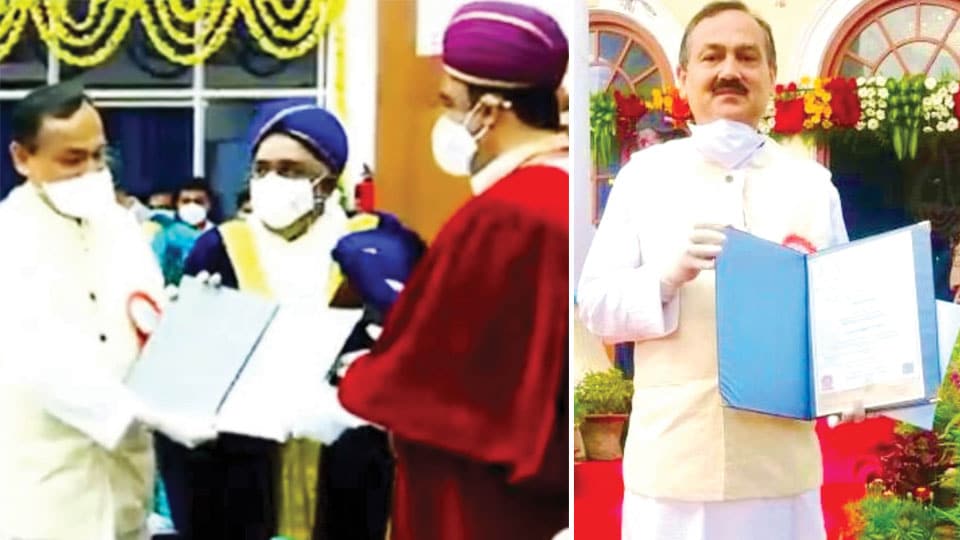 Mysore/Mysuru: The Chief Electoral Officer of Karnataka, Sanjiv Kumar, was among the 654 candidates who received Ph.D degrees in various subjects at the 100th Convocation of University of Mysore (UoM) on Oct. 19.

Sanjiv Kumar, an IAS, started his Ph.D thesis titled ‘MGNREGA — Law, Rights, Processes and Sustainable Livelihood: A Critical Study in Karnataka’ in Development Studies under the guidance of Dr. Shrijay Devaraj Urs in 2015.

When contacted he said, “I got permission to take up the research work by the State Government in 2014. When I started my research, I was serving the Rural Development Department. Then, there was not much demand for jobs offered under MGNREGA. Compared to other Southern States, funds utilisation under the scheme was less in Karnataka. This prompted me to carry out research. In my thesis I have suggested ways to improve funds utilisation. It can be replicated for the national job scheme across the country.”

The IAS Officer received the Ph.D degree certificate from Higher Education Minister Dr. C.N. Ashwathnarayan, who is also the Pro-Chancellor of the State-run Universities and UoM Vice-Chancellor Prof. G. Hemantha Kumar during the Centenary Convocation ceremony held at Crawford Hall here on Monday.

On the previous day, Sanjiv Kumar, along with his family members, visited Sri Cheluvanarayanaswamy temple at Melukote in Mandya district and offered prayers.

Sanjiv Kumar interacted with the officials and learnt about the importance of the temple. He also had darshan and offered prayers at Yoganarasimhaswamy temple, atop the Hill.